It was just a few days into my stay in Yerevan that I gave it a spot on my growing list of places I might like to live. Armenia’s capital city of roughly one million people hooked me with its walkability, interesting art and tasty options for food. Most important, though, I found it easy to make connections with people. There was the host where I stayed who showed me the foods she and her mother were cooking and storing for winter, the Iranian mom and kids I chatted with at a local mosque and a retired man I met at a concert. He eagerly awaited the performance of the “Symphonie Fantastique” and lamented the state of the young people in Yerevan. (“They only want to wear hip clothes and learn English,” he sighed.) And then there were those young people, who relaxed in city parks, celebrated the Armenian Independence Day with singing and dancing and, yes, put together some fresh ensembles. These were among the places and moments that gave Yerevan the feel of a place I could stay. 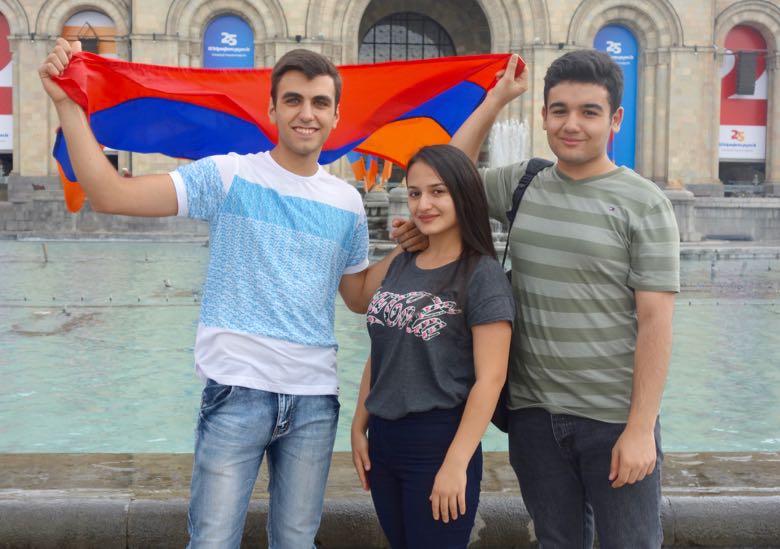 Music With a View

The Cafesjian Center for the Arts is housed in and around the Yerevan Cascade, a wide set of steps featuring fountains and sculptures and offering views of the city and Mount Ararat. The outdoor sculptures are modern and playful, and inside are multiple galleries showing mostly contemporary art. For me, the highlight of the inside gallery space was the concert hall—an intimate room at the top of the Cascade with excellent acoustics and floor-to-ceiling windows overlooking the Cascade and the city. On the night I attended, the Iranian pianist Raphael Minaskanian gave a beautiful performance of works by Chopin, Schubert and others. Many people in the small audience greeted each other before the performance, which added a warmth to the evening. A ticket cost 2,000 AMD, which included free entrance to the art galleries. 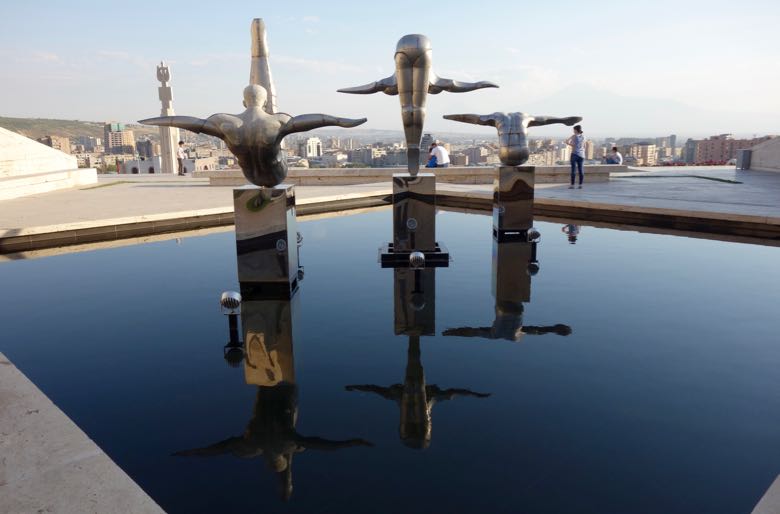 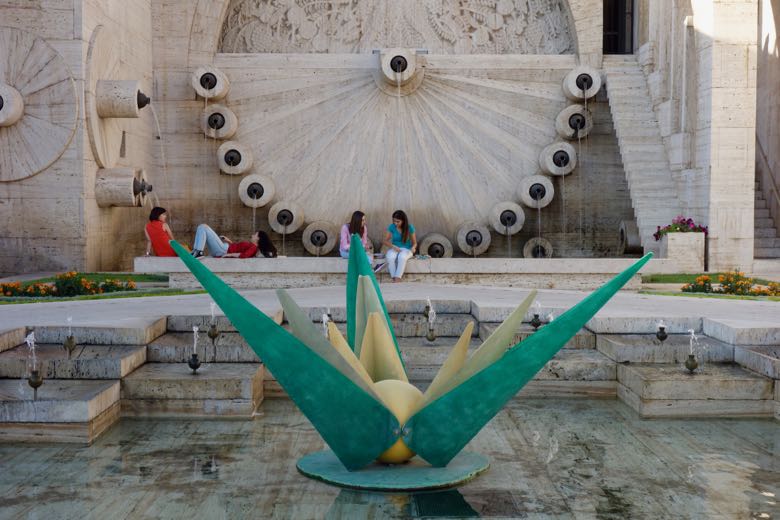 People relaxing near another sculpture on the Cascade 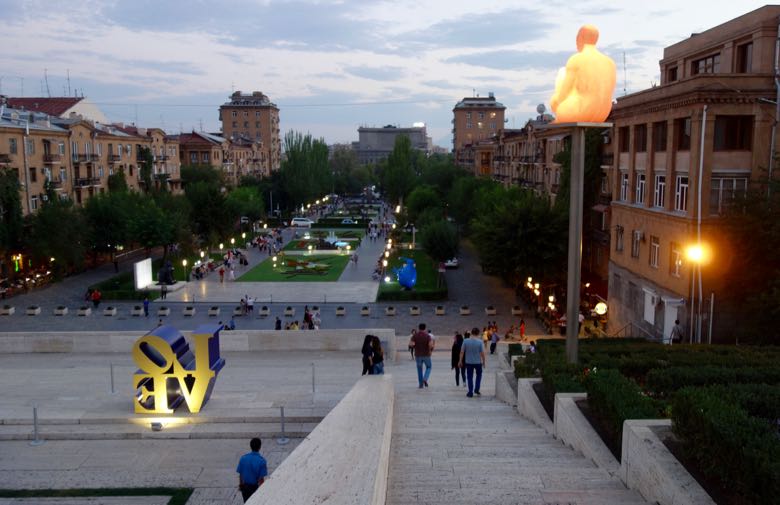 An evening view from the steps of the Cascade

The Sergei Paradjanov Museum is a relatively small building bursting with the delightful creativity of the artist and filmmaker known for works such as “Shadows of Forgotten Ancestors” and “The Color of Pomegranates.” The collection includes collages (which Paradjanov called “a compressed film”), mosaics and dolls. One room features sketches he made and coins he embossed with his fingernails while imprisoned by the Soviets. It seems he never stopped creating, and his inventive and playful work is so much fun to explore. Entry is 700 AMD. (This article from The Guardian talks more about Paradjanov and his films.) 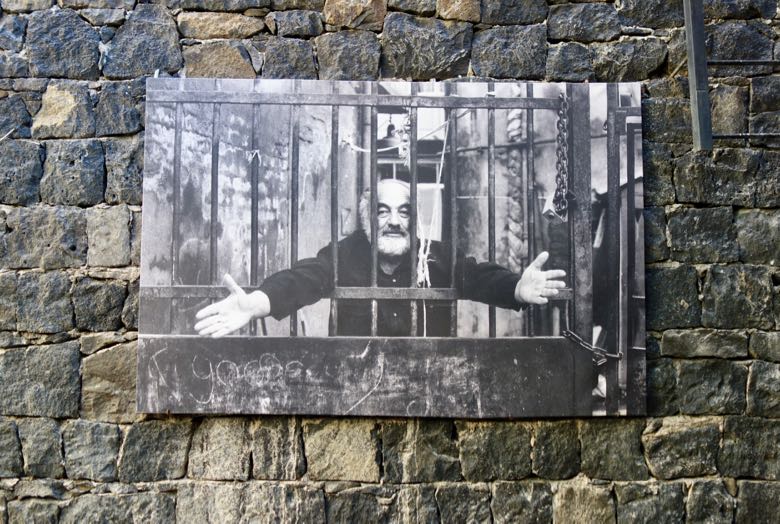 A photo of Sergei Paradjanov on a wall outside the museum

The neighborhood of Kond is one of the oldest in Yerevan, with narrow, winding roads and homes surrounded by stone walls. Curtains cover doorways and blow in the breeze, revealing some renovated interiors and some more aged. The old buildings contrast with some of the new and somewhat bland architecture in parts of Yerevan.

As I took a photo of one alley, two men sitting outside at a table to play a board game laughed and waved me over to snap a photo of them. I then continued around the maze of roads, hearing music coming from one home, eyeing what looked like sheep fur laid out on a sheet on the ground and watching a few kids play soccer. Eventually, I came upon a woman standing in the street with a boy I guessed to be in his late teens. She had short red hair, a slight roundness to her shape and wore a sparkly tank top. I smiled and said “barev dzez” (hello). She returned the greeting, first in German. When I could not reply, she tried saying hello in Russian. Still, I could not respond beyond a smile. Finally, she smiled, threw up her arms and said, “Hey, baby!” We all let out a big laugh. 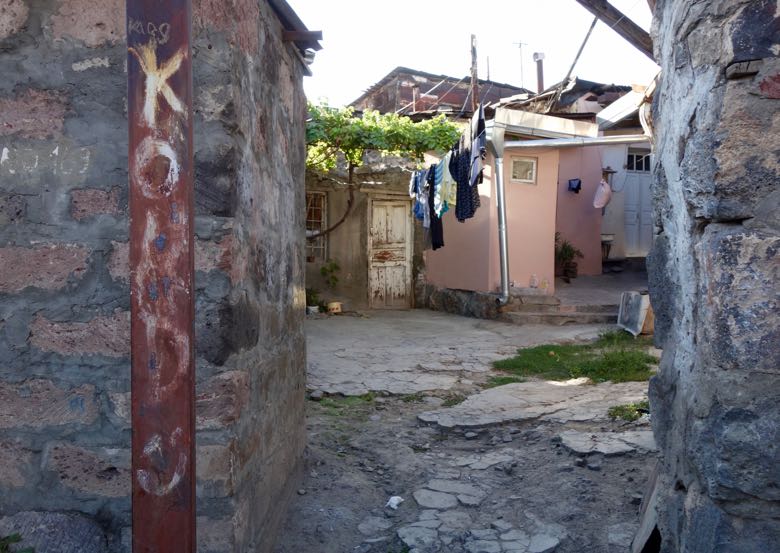 Some homes in Kond (above) and one of its alleys (below) 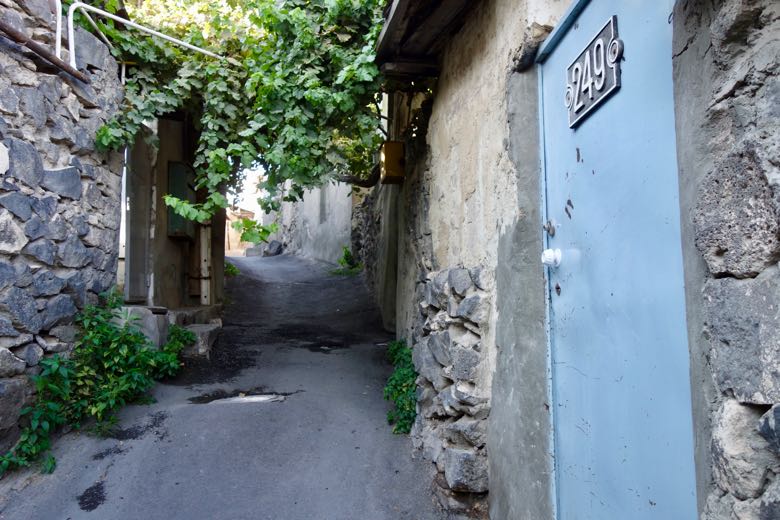 If you are in need of snacks or simply love looking at food (as I do), Gum market is a fun place to explore, with colorful shelves filled with fresh and dried fruit, cheeses, nuts, pickled vegetables and stacks of lavash, a thin bread eaten with most meals. Gum is within walking distance of the popular outdoor market called Vernissage, which sells souvenirs, handbags, jewelry, rugs and other crafts. These days I rarely buy anything beyond my basic necessities, but I cracked on the combination of a sweet vendor and a surprisingly low price for a bracelet I loved. 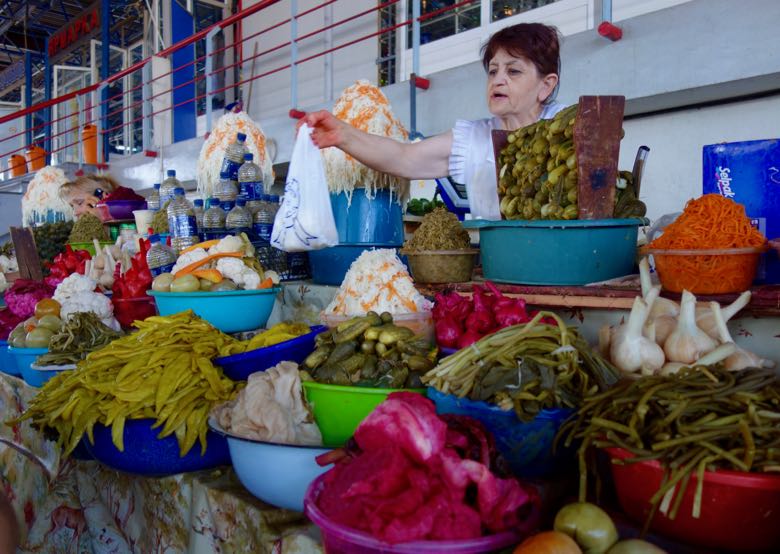 Pickled vegetables at the Gum market

Getting a Photography Fix

Just across the street from the Vernissage market is the Armenian Center for Contemporary Experimental Art, which offers interesting shows and events from Armenian and international artists. When I was in town, I attended the opening night of an exhibition called “Window to the Contemporary Art of Iran,” which included paintings and some gorgeous photography.

Dance to the Music

I was skeptical about the “musical fountains” at Republic Square, thinking it might be a gimmick without much real appeal. Wrong I was. The fountains danced their hearts out to a mix of classical and popular music, with perfectly timed choreography that had them reaching heights I never imagined possible. My favorite performance? A passionate play (and inadvertent spray) to the song “Live and Let Die.” 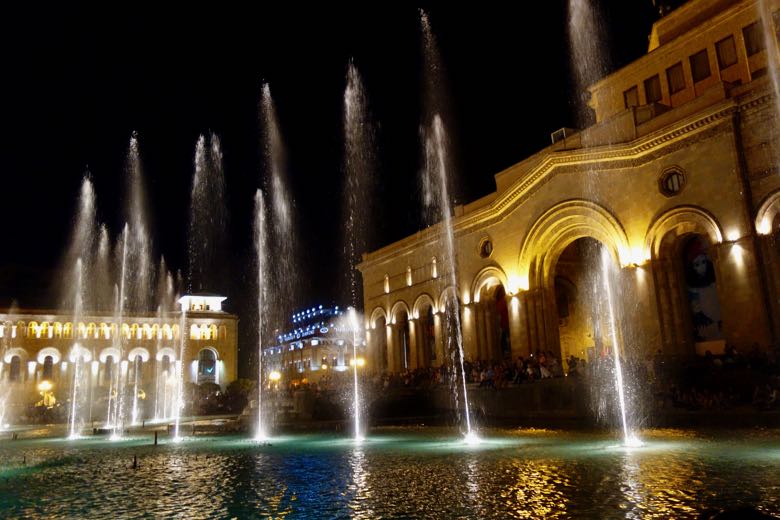 The fountains in the midst of a high kick

Where I Stayed: I had a private room and shared bathroom at the Classic Hostel Yerevan, which I highly recommend. The hosts are a wonderful family, and though it is not directly in the city center, you can easily reach the city center by metro. There is also a kitchen available for making meals.

Where I Ate: Tavern Yerevan (Pandok Yerevan) is one of the more popular restaurants in the city. There are several locations, and some include live bands and singers in the dining room. I ordered the tolmas (meat and vegetables wrapped in cooked cabbage leaves) and paired it with a delicious bowl of red bean and pumpkin soup. Other good restaurants included Karma, which served Northern Indian food, and Anteb, which offered fantastic hummus and kebabs, as well as some of the foods I miss from Jordan such as labneh and za’atar.

Getting Around: If you are staying in the city center, you can reach many of the most popular spots on foot, including sites such as the Cascade, Republic Square and Matenadaran. If you tire of being on your feet, the one-line metro (100 AMD) will help. For places outside the city center (such as the highly recommended Armenian Genocide Museum), you may want to take a taxi, which generally cost from 1,000-2,000 AMD. I did not take any buses, but that is another option you could explore. 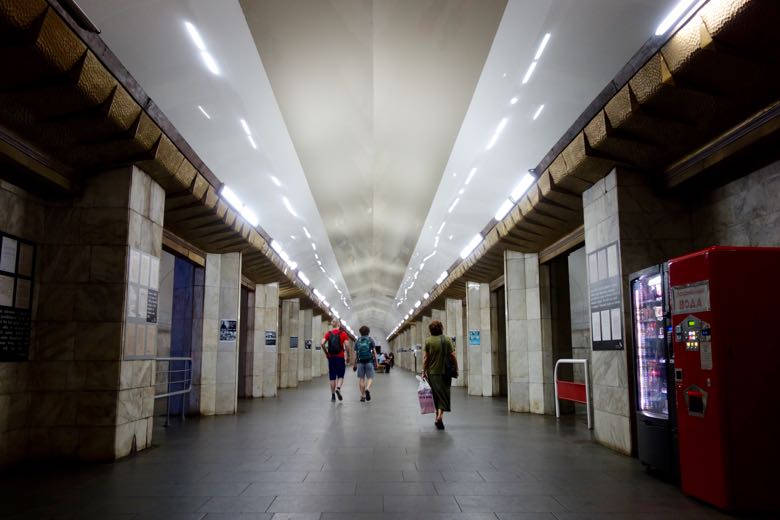 Inside one of the metro stations in Yerevan

Have you been to Yerevan? What were your impressions? Share your thoughts and tips below! 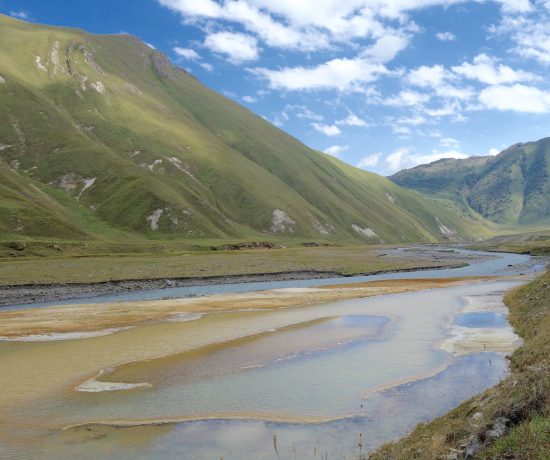 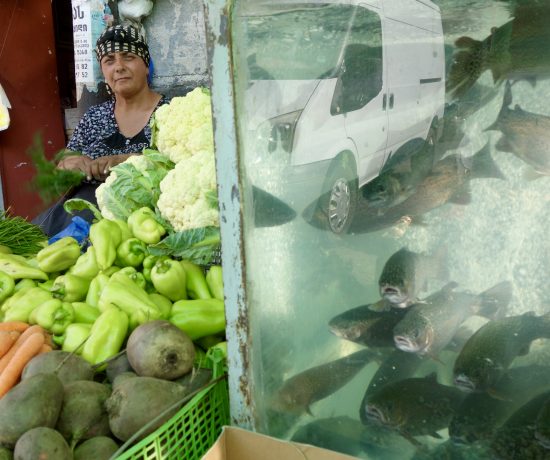