Growing up, when I wanted quiet time I would walk to the less trampled woods of Rock Creek Park near our family home in suburban Washington, D.C. I sat on a rock or a log at the edge of the creek and listened to the gurgle of the water. There had to be others who ventured to that seemingly hidden spot in the woods, but in those moments it was just for me—a place to breathe and to be.

I still treasure that private time with nature, whether in the desert, the forest or the sea. On a trip to the hilltop town of Sighnaghi, Georgia, I was surprised to find it behind the blue painted wooden door of an abandoned building.

Sighnaghi is located in the Kakheti region of Georgia, an area known for its wine production. It features curving roads made of thick rectangular stones and homes with terra cotta rooftops and carved wooden balconies painted in colors such as a soft blue or pale green. With only about 2,000 residents, it is quiet but for the occasional putter of a beat-up-but-still-going Lada or the rumble of a quad bike shuttling a tourist through the sloping streets.

The town has an Italian look and is surrounded by a high wall with watchtowers. The wall once served a defensive purpose. Today, tourists climb it for views of the green Alazani Valley below and the Caucasus mountains in the distance. 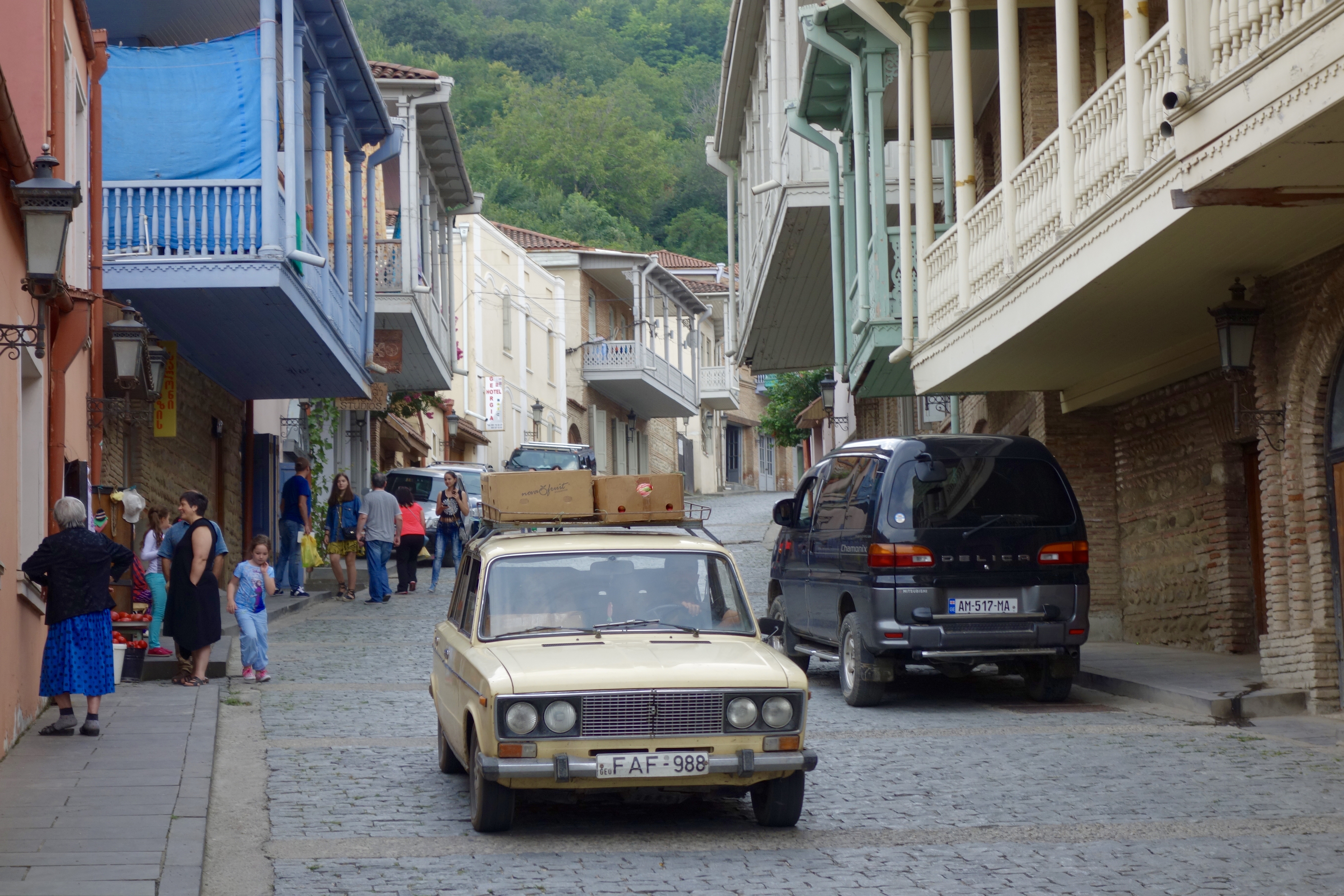 A Lada coming through the center of town. I find them adorable! 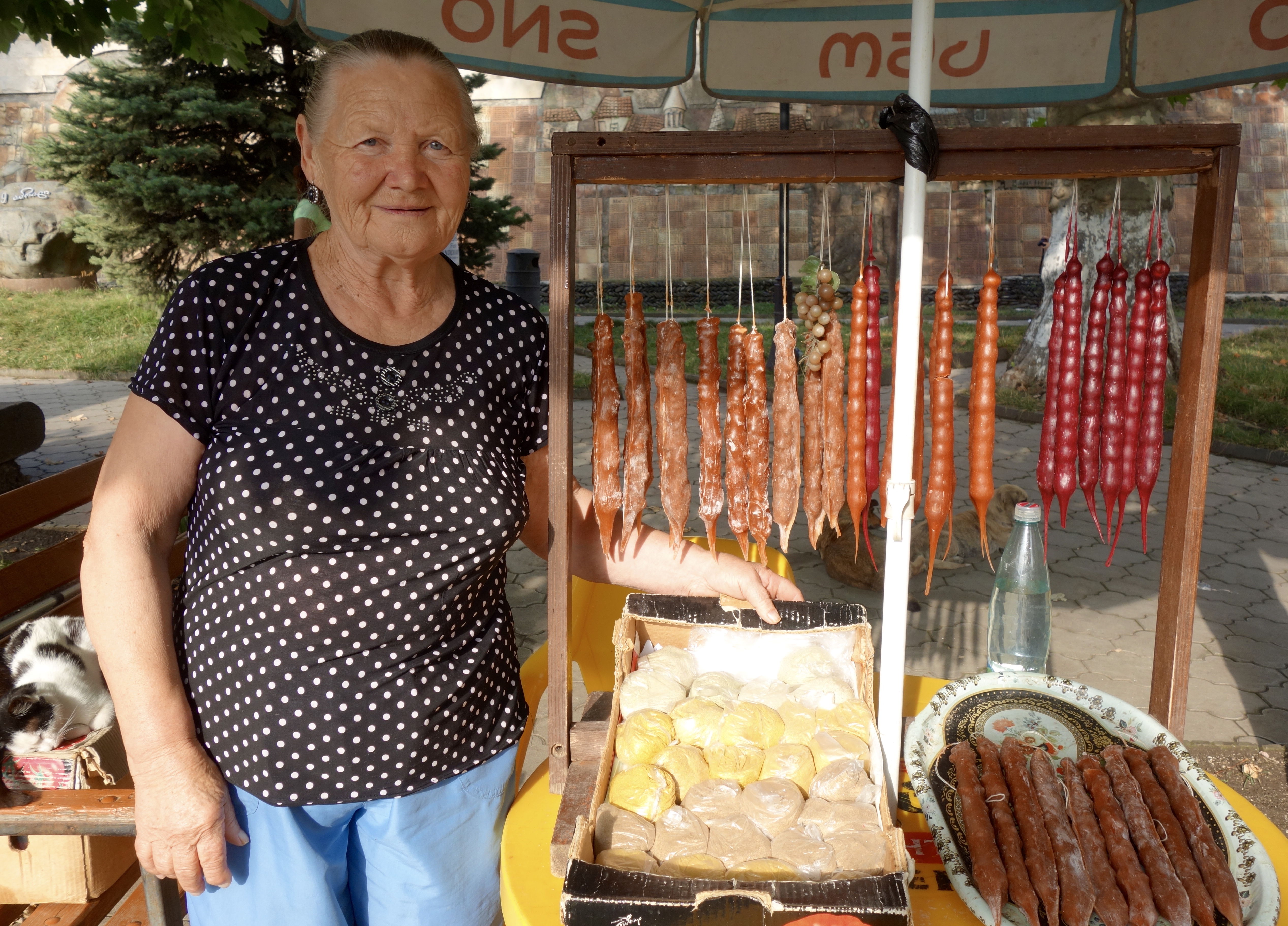 A woman selling churchkhela (a snack made from walnuts, flour and grape juice) 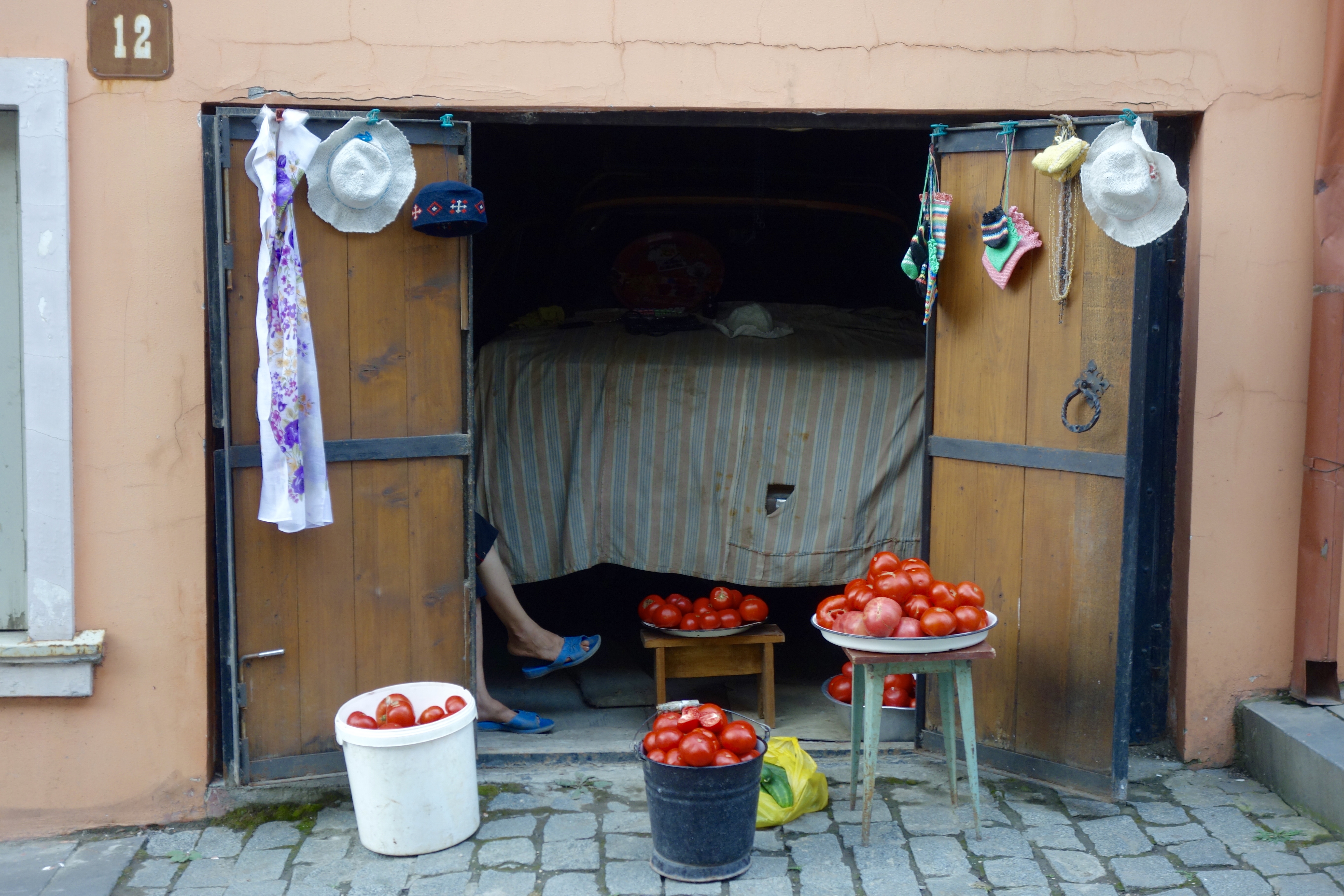 I arrived on a bright weekday afternoon, sitting for a lunch of chakhokhbili (chicken in a stew of tomatoes and herbs), along with roasted potatoes, on the sun-drenched patio of a restaurant in town. I strolled the streets, peering in the windows of abandoned homes with holes in the floors, as well as faded and torn wallpaper on the walls.

Through the dusty windows of one brick building with a blue door, I had a view of puffy clouds in the sky and an abandoned home perched further on the edge of the mountain with an unobstructed view of the green and gold plains below. No one else was in sight. I stepped inside. Empty wine and beer bottles and crumpled cigarette packets decorated the dirt floor. Across a small overgrown field stood the abandoned home I had eyed through the windows. The wooden beams were exposed, the roof long gone. Purple wildflowers poked through the window sills and up through the bricks at the tops of the walls.

From a doorway on the ledge of the one small room in the building, I heard kids splashing in a pool outside a home farther down the mountain, an occasional small dog barking and the buzz of something like a chainsaw a ways away. Most close to me, though, I heard only the sound of fluttering bird wings and the rustle of the wind through the leaves of the overgrown plants. I stood and breathed in the sensation of this still, open space. A feeling of spaciousness spread through me. Though the litter made it clear others had found their way here, too, for that moment it was “my” place. 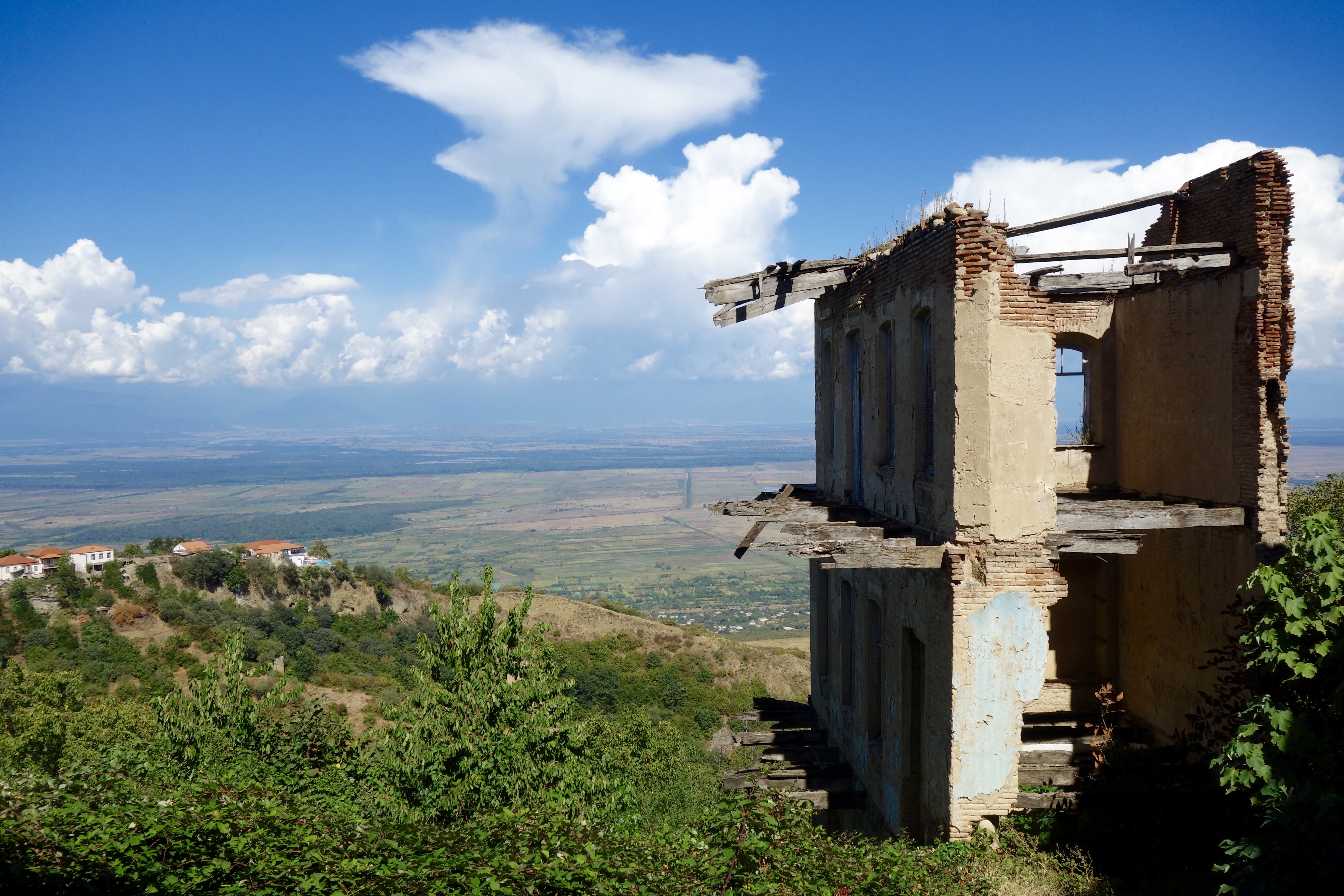 The view from the abandoned building

I explored other parts of Sighnaghi, absorbing more breathtaking looks at the town and valley from both the city wall and watchtowers, as well as a patio behind the Sighnaghi Museum. I peeked in more of the abandoned buildings, enjoying their silence and mystery and imagining their potential. One vacant building with large windows, I decided, would make an ideal space for an art gallery or restaurant. 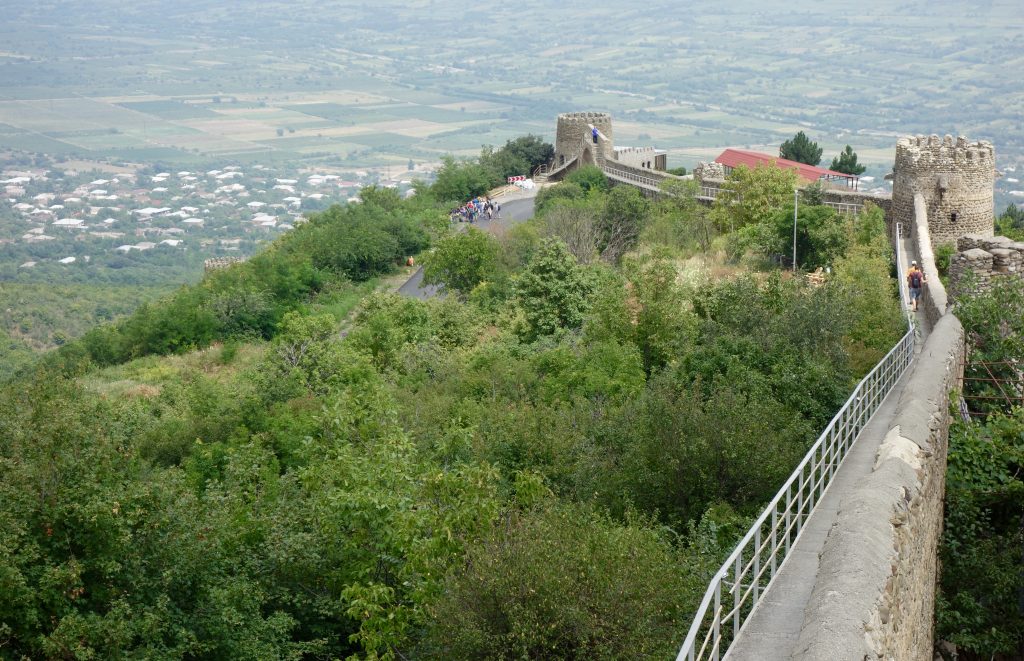 A view from the wall surrounding the town 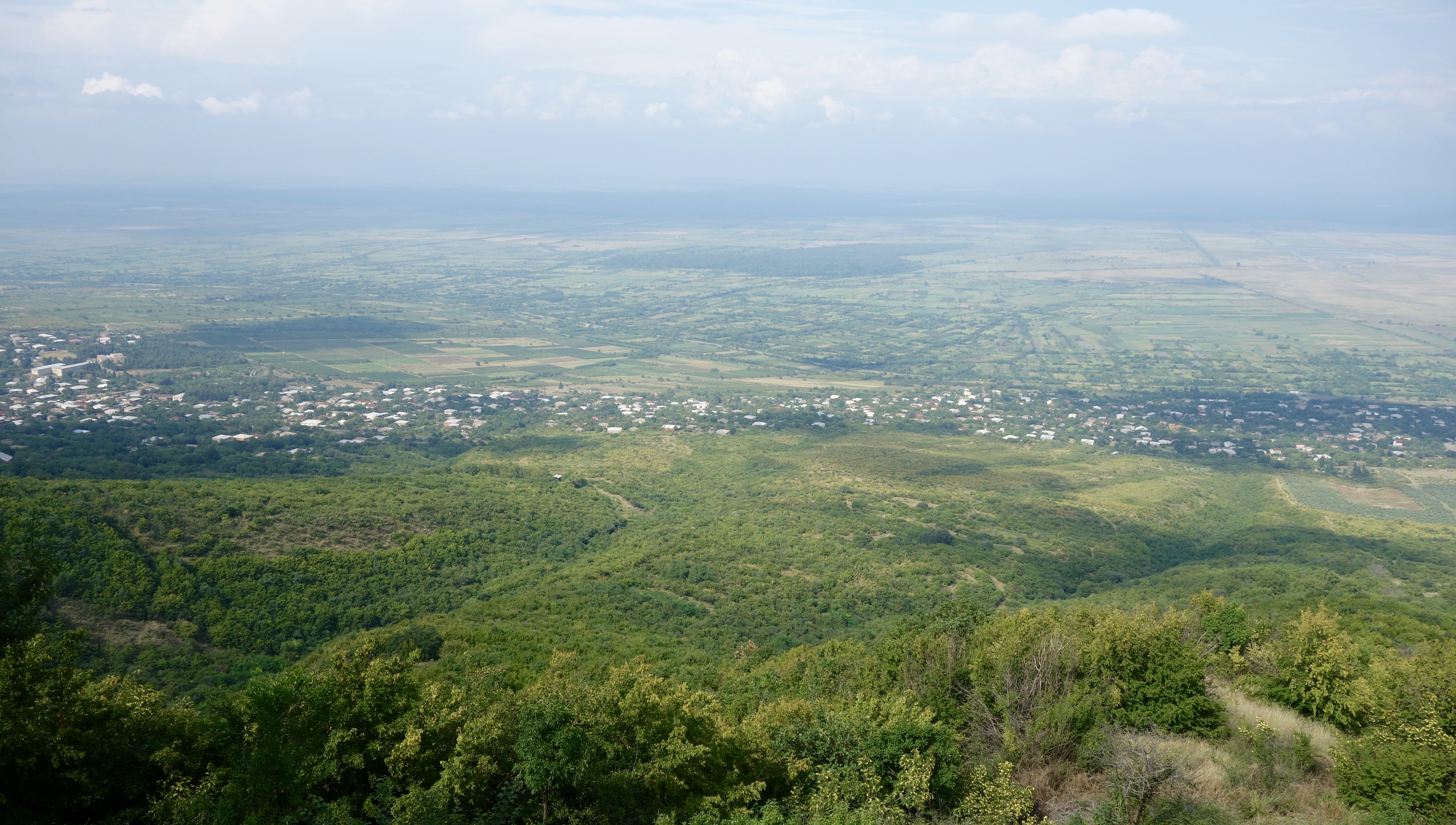 A view of the Alazani Valley from Sighnaghi 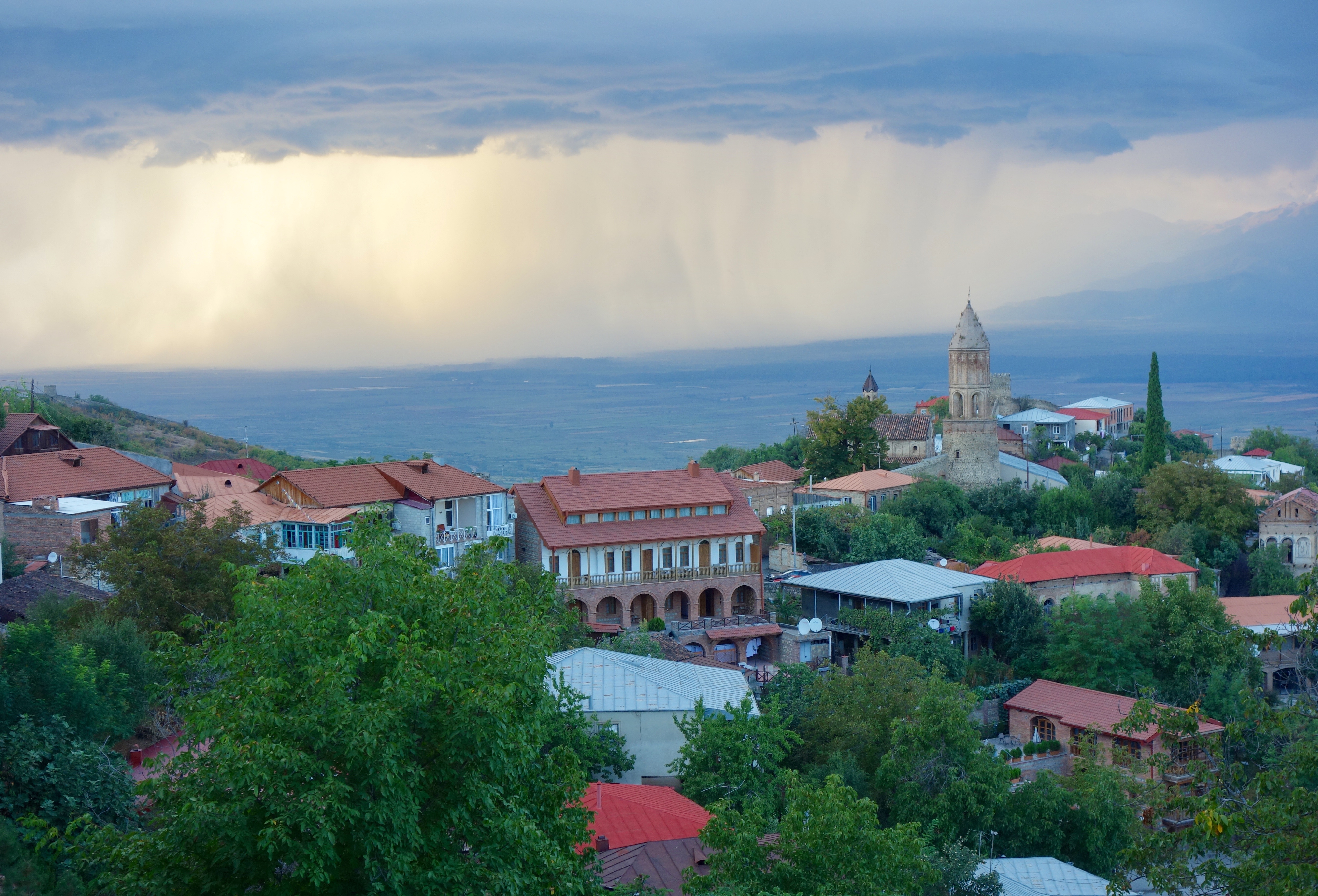 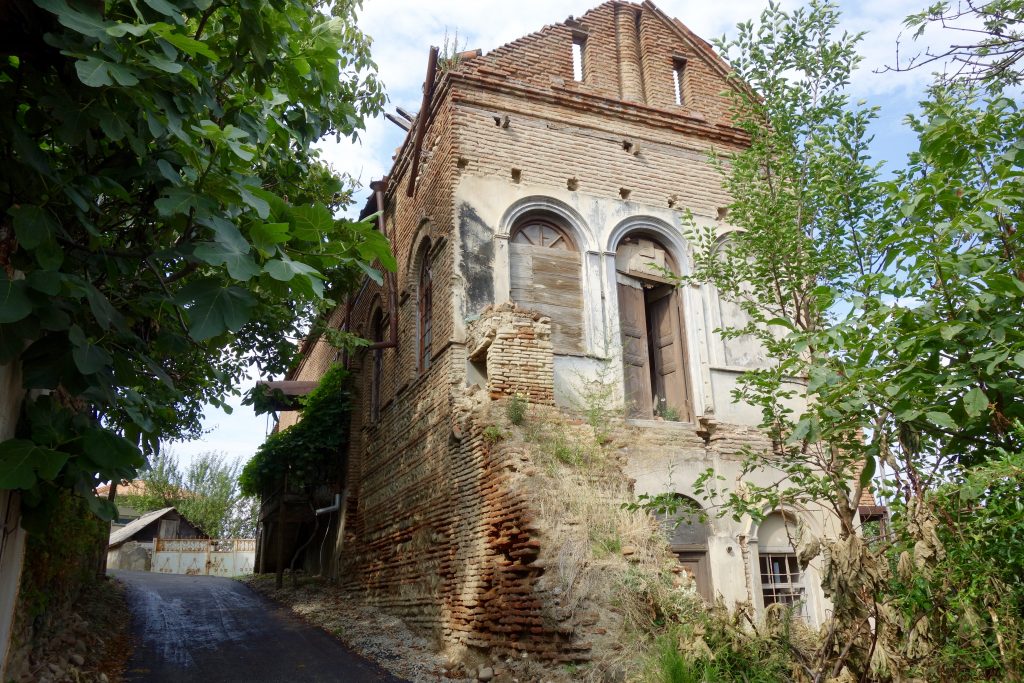 One of many abandoned buildings in the town

Still, my feet kept diverting me to the blue painted door. On return visits, I observed the skies that had changed from white balls of cotton to a heavier gray. By early evening, the sun began to set over the valley, casting shadows of the wooden beams of the crumbling home on its exposed walls.

As I prepared to leave Georgia more than a month later, Sighnaghi’s space and quiet called to me again. In the late afternoon, I arrived and returned to the viewpoints, enjoying the same sense of spaciousness inside. The following morning I woke to a breakfast of homemade yogurt; thick, fresh bread with butter; granola; and a salad of ripe tomatoes and cucumbers. I had missed seeing the Bodbe Monastery on my last visit and decided to go.

The monastery is located just two kilometers from Sighnaghi. It was built on the burial spot of St. Nino, one of the most venerated saints in the Georgian Orthodox Church (the reason Nino is among the most popular names for a baby girl in Georgia). Georgians come to visit the monastery and to bathe in a nearby spring that is said to have healing powers.

As I arrived at the spring, a group of men dunked their bodies in the water. I waited with the women and talked with a young German traveler. She asked me about things to do in Sighnaghi, wondering if it was worth the time in her packed day. She and her Russian boyfriend had stopped in the night before, she said, but “it just seemed like a dead Italian town.”

As I walked back later, I smiled to myself. I guess I really like dead Italian towns.

Other Things to Do: Many people use Sighnaghi as a base for exploring the Kakheti region. You can do wine tastings, go horseback riding and visit monasteries. In addition to Bodbe Monastery, you may want to make a day trip to the monastery complex of Davit Gareja, near the border with Azerbaijan. In town, the Sighnaghi Museum holds, among other exhibits, a collection of paintings by the Georgian artist Niko Pirosmani. Last but not least, you can get hitched in Sighnaghi! The word is that wedding services are available 24/7 at the Sighnaghi wedding house.

How to Get There: Marshrutkas (minibuses) depart from Tbilisi’s Samgori station and return to Tbilisi several times each day. The cost is 6 GEL each way. The ride takes roughly 1 hour and 45 minutes. 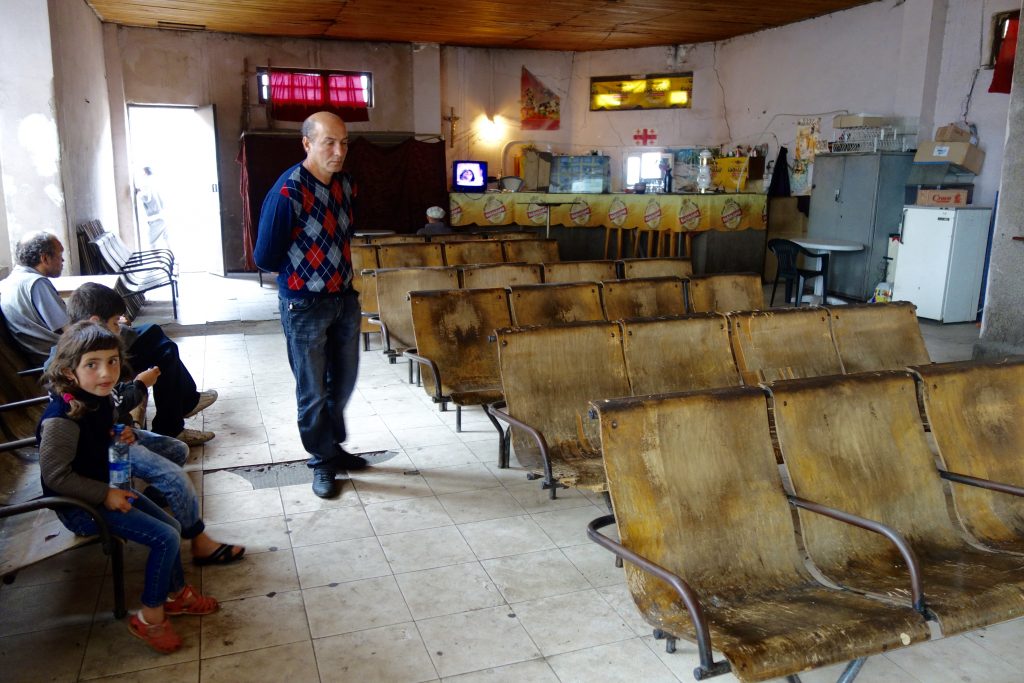 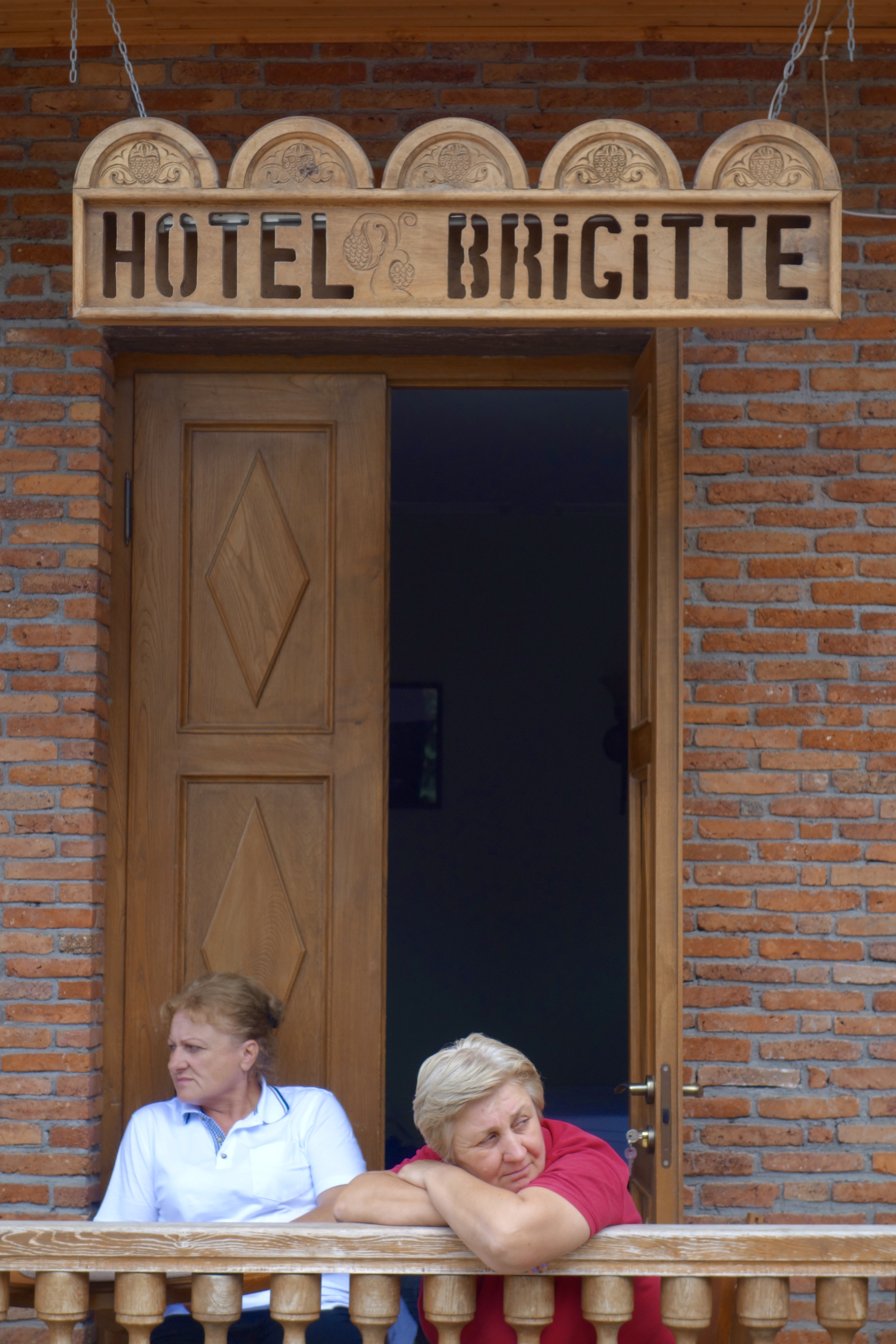 I could not afford Hotel Brigitte, but how could I resist adding the photo?

Where to Eat: If your guest house offers an option for dinner, this is a great way to try Georgian home cooking. Come hungry and be prepared for plenty of homemade wine and chacha (a strong alcohol, sometimes called “Georgian vodka,” that is made from the remains of wine production). I shared a lengthy meal with several other travelers. It started with small plates of food such as roasted chicken; beets; carrots and cabbage; and diced potatoes and vegetables in mayonnaise. The mother of the family then brought out a stew of red meat and tomatoes and followed that with khachapuri (bread filled with cheese). Surely, we were done now? But, no. The son barbecued pork and onions over a kindling of grape vines. Finally, mama delivered small plates of sweet and juicy melon for dessert. Countless toasts filled the space between every bite. By the end of the evening, normally pale cheeks flushed a bright red, words were slurred, and a Latvian man across from me massaged his wife’s red-painted toes at the table.

Of the restaurants in town, I recommend Shio’s, where I ate the chakhokhbili. I also had dinner at Pheasant’s Tears. It offers a lovely setting, and my main course—chicken with tomatoes and garlic—was delicious. However, the primary reason to go to Pheasant’s Tears is for wine tasting. It is more expensive than other restaurants, so if you are not interested in wine, my suggestion is to go to someplace like Shio’s. One of my hosts also recommended Nikala Restaurant, though I did not make it there.

What have been your favorite “secret” spaces in your travels or your hometown? Where do you go when you need to refresh? Share in the comments below! 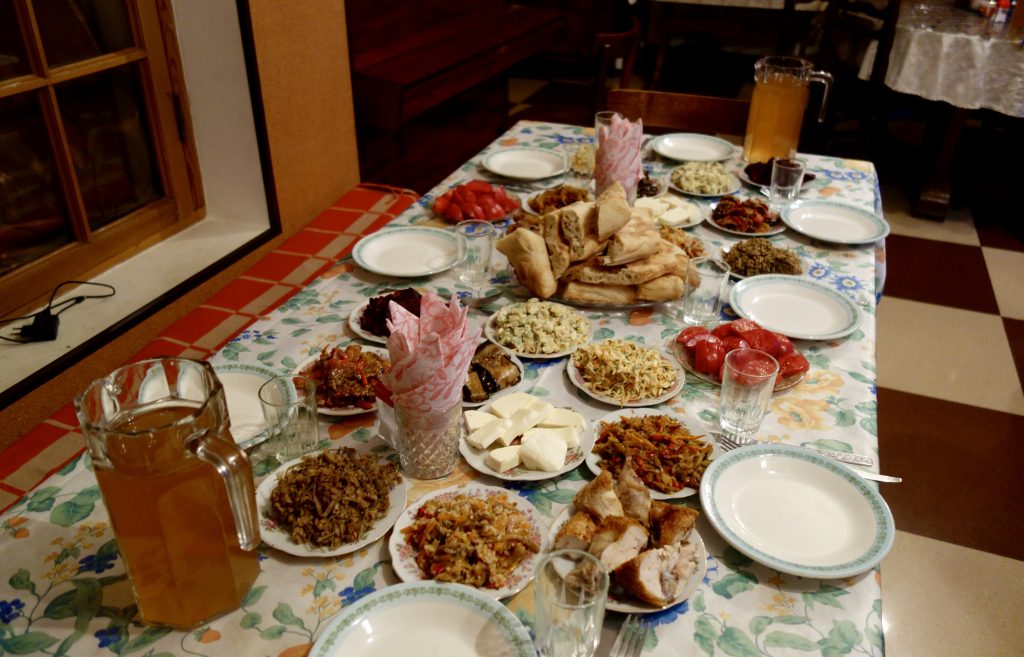 The start of the home-cooked meal 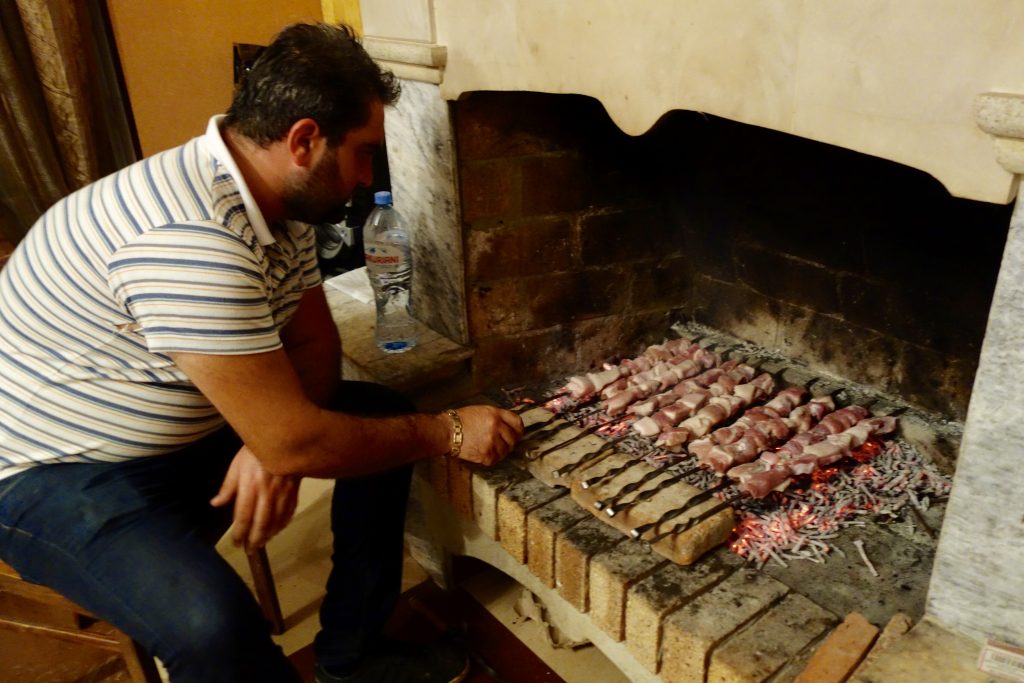