In hindsight, the directions were simple: Follow the path to the right until you get to that coconut tree—you see that one there, right?—then walk through a short jungle area. When you come out of the jungle, walk across the rice fields until you get to the hut. From the hut, there is just one path to Cambulo. The problem was, no, I could not really see the coconut tree. We had already gone over the directions twice, though. I said thank you and figured I would sort it out as I walked.

I had taken a cramped and cold overnight bus from Manila to nearby Banaue, in the Ifugao Province of North Luzon, Philippines, several days earlier. I stayed three nights in Banaue exploring the rice terraces and the Hapao hot spring and then traveled by tricycle to Batad. All of the rice terraces in the region—which pre-date colonial times and are said to be 1,000-2,000 years old—were a lush and vibrant green in April and May, but in my eyes the amphitheater-style rice terraces in Batad were the star attraction. My first afternoon in Batad, I trekked with my guide Sherwin down deep and tilted steps to the Tappiya waterfall and swam in the cool waters beneath it. Sherwin and I then took the tricycle to see the rice terraces at Banga-an, a small village near Batad. Sherwin dropped me back at Batad that evening, where I would spend the next two nights on my own. 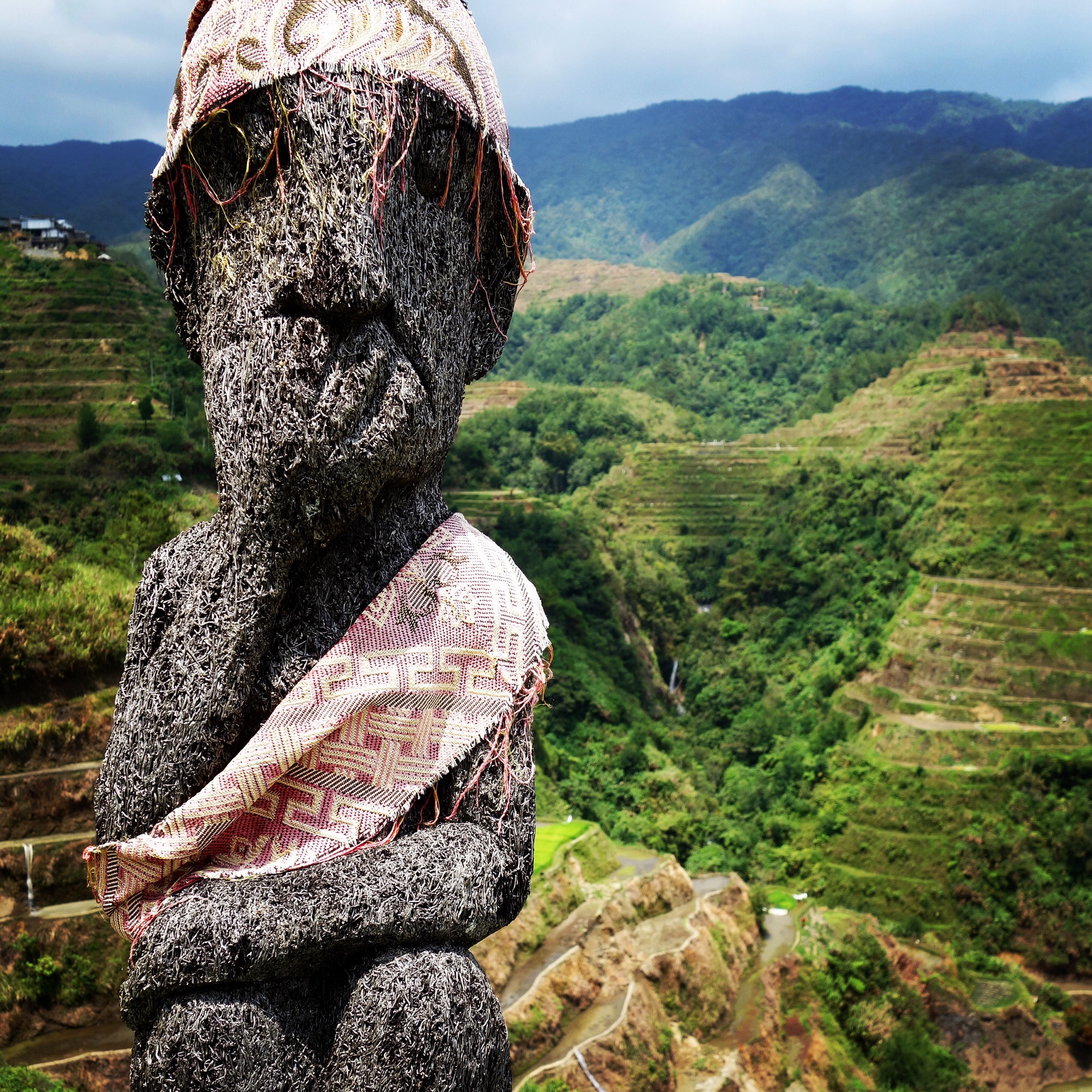 A rice God watching over the Banaue rice terraces 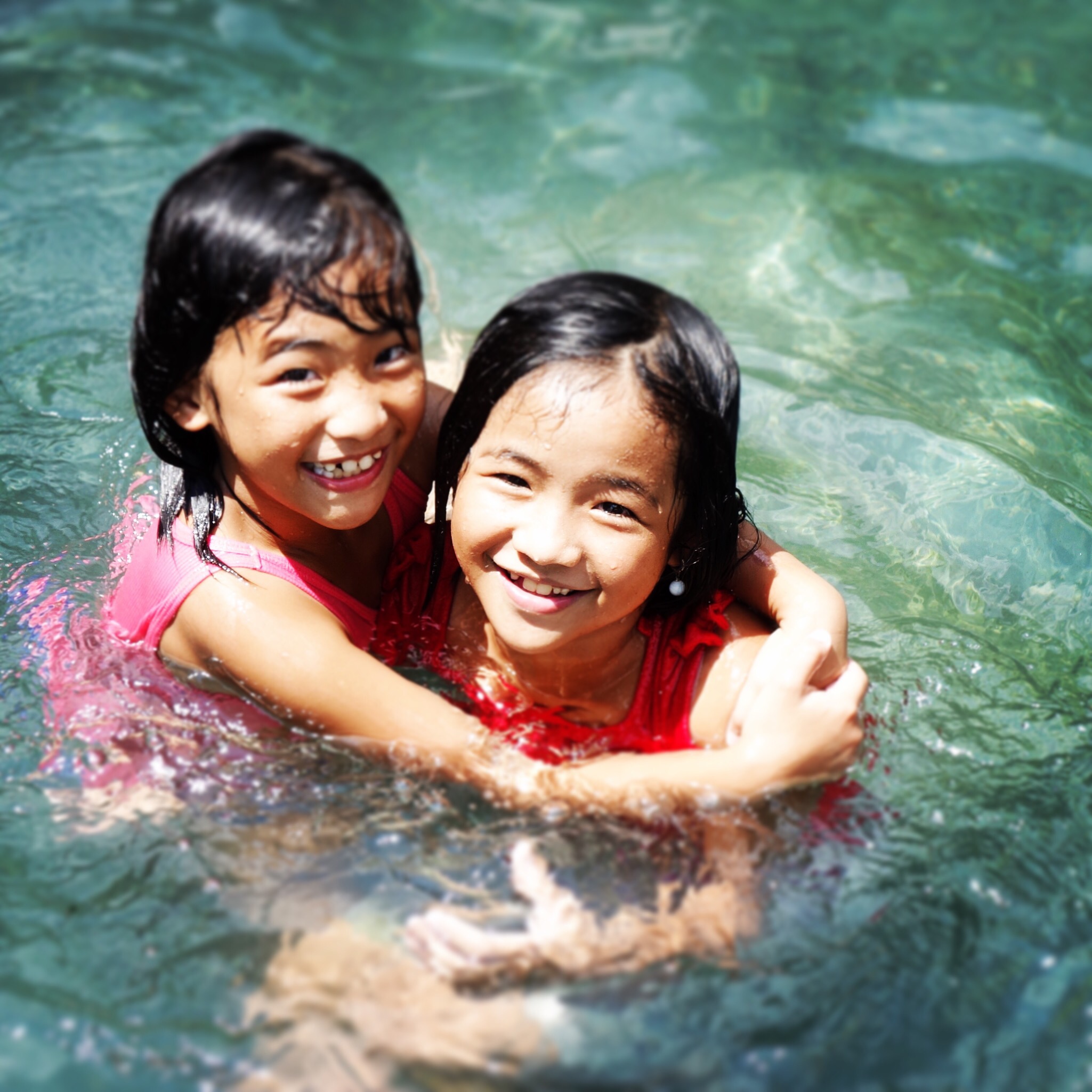 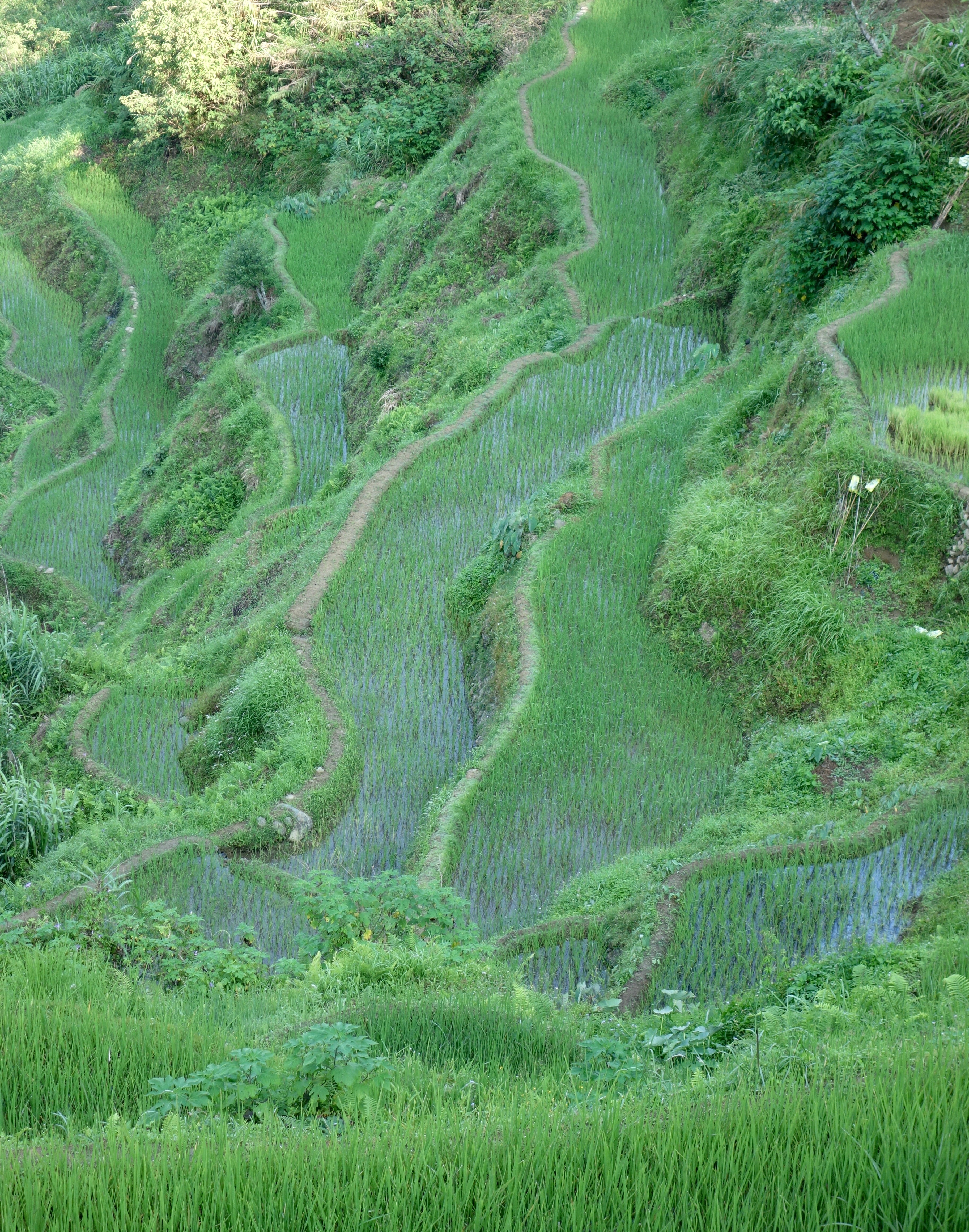 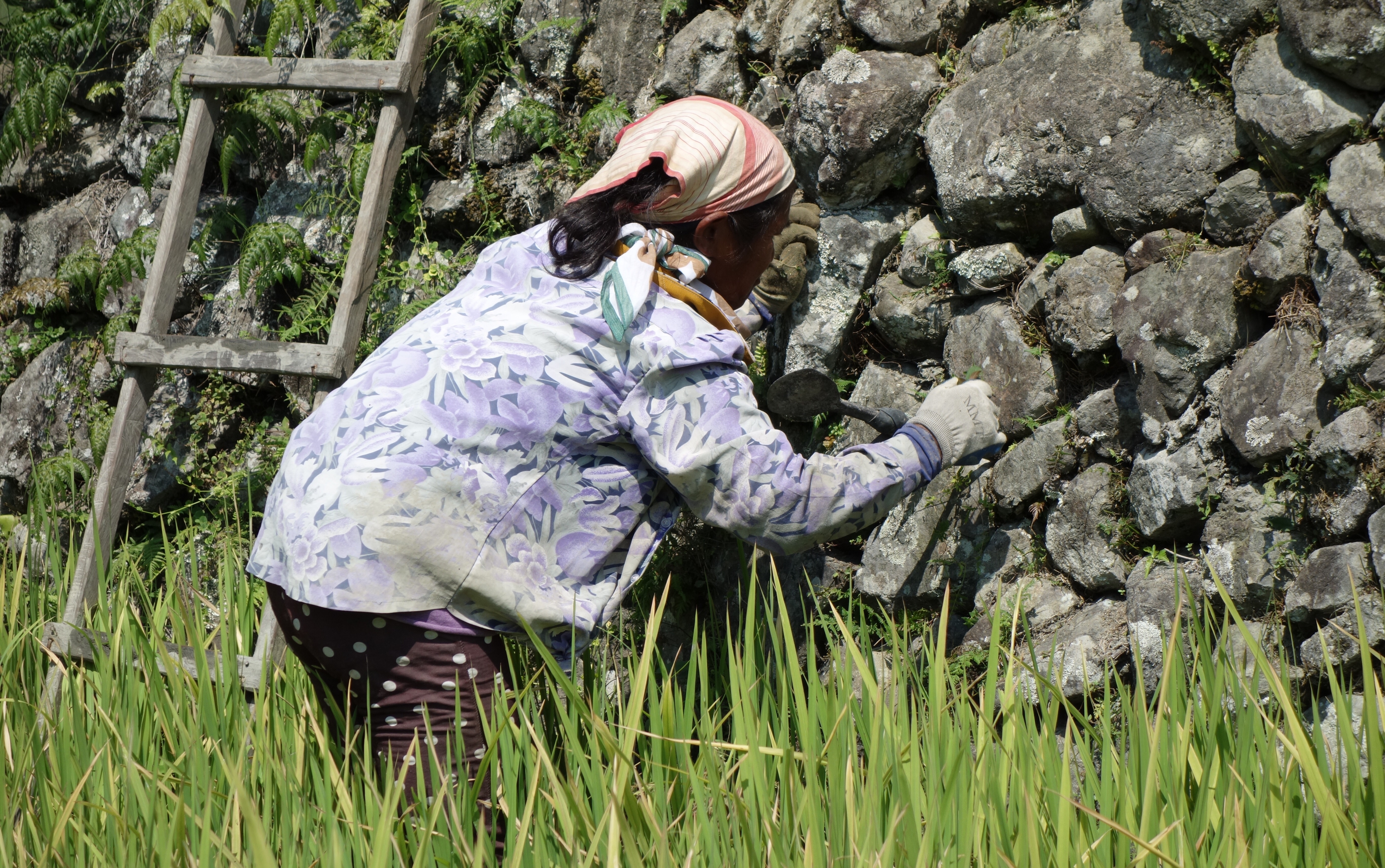 A woman weeding an irrigation wall at the Hapao rice terraces 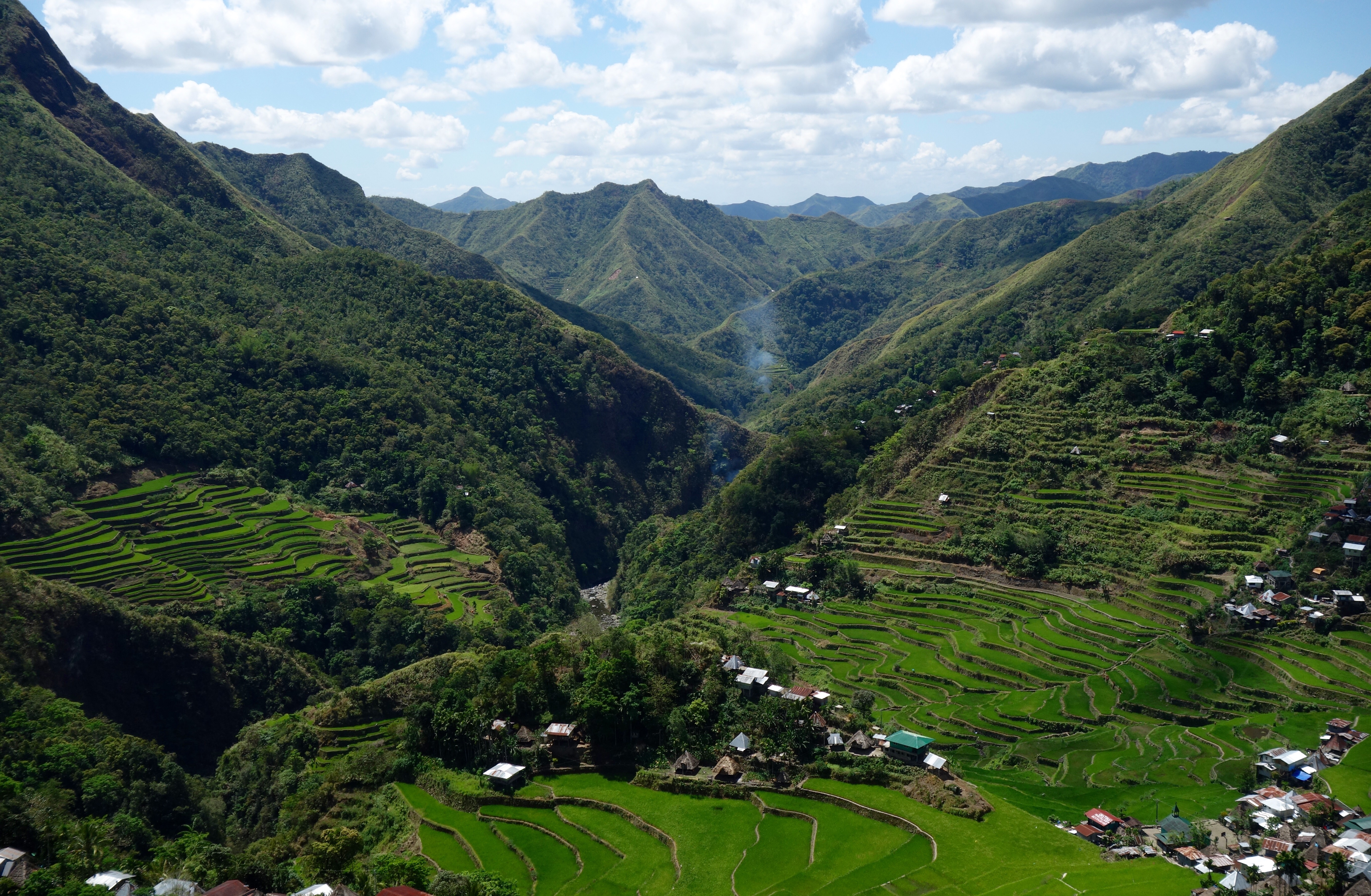 Sherwin had been an excellent guide—patient when I wanted to stop for photos, holding my hand so I could walk across a particularly narrow ledge for a better view—but I was set on making my own way to the village of Cambulo the next day, said to be a two hour trek one way. Most of the hiking I have done in these past 16 months has been with a guide—a necessity on unmarked trails with frequent opportunities for wrong turns—but I most enjoy the days when I can walk at my own pace and soak in the soothing details of nature on my own.

With help along the way, I found my way to the coconut tree. And as I got through the short jungle area, a woman had a hut set up where she was selling drinks and souvenirs. I asked her where to walk across the rice terraces, and she gestured ahead. The path would take me across the top of the “amphitheatre.” Each tier of the terraces was filled with the large amount of water needed to grow the rice and had a ledge that dropped many feet below to the next terrace. Parts of the ledges were covered with small cement squares, parts with rounded and occasionally wobbly stones and parts with packed dirt. Women and men used the ledges to move through the terraces for planting and harvesting. 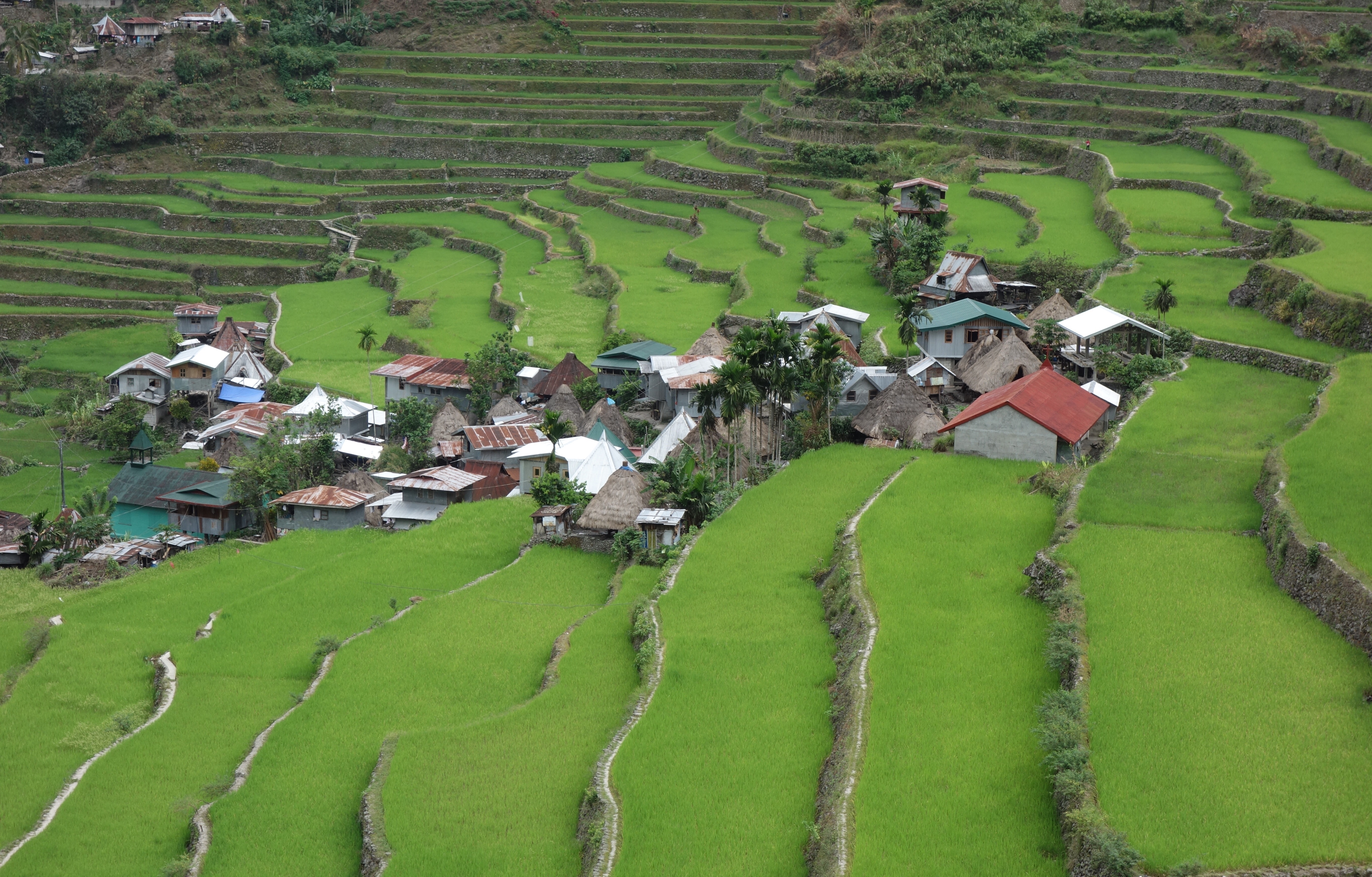 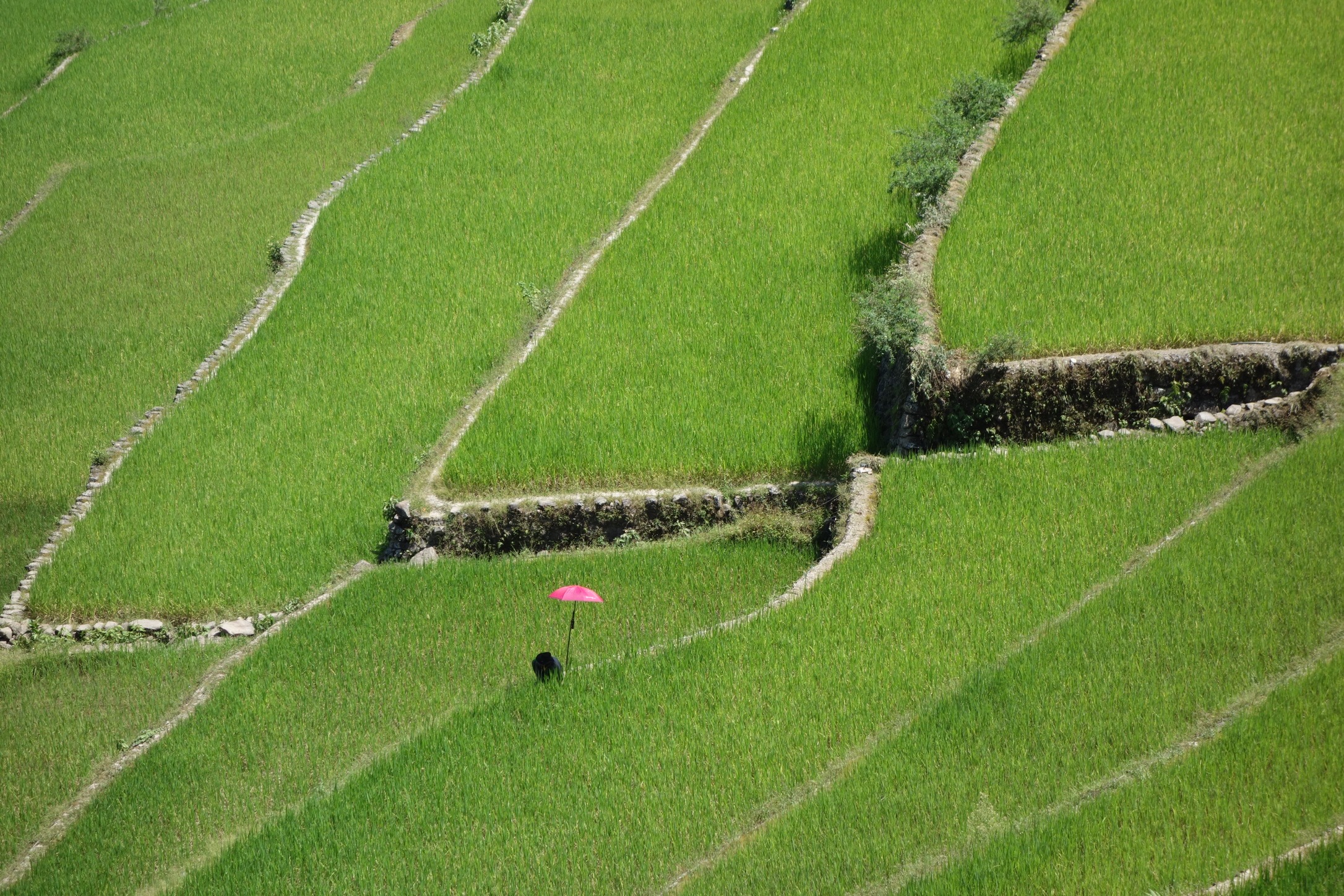 As I got to the ledge, the thought occurred to me to double-check whether this was the right one. I decided to keep going. While the path started with the small cement squares on which to walk, as I continued the squares turned to more narrow and uneven rounded stones and, in some spots, even more narrow and uneven packed dirt. The drop-offs of the ledges had already activated my fear of heights, but the fear got stronger as the spots on which to place my jumbo feet got smaller. I focused on the path in front of me, doing my best not to look at the drop-off into the rice paddy on my left or the open space that would send me much farther below to the rice paddy on my right. I looked back several times, wondering if I should return to where I had started, but at this point the path back would not be easy either. A guide could have shown me the right path. Or, if this was the right path, a guide could have helped me across it. My legs trembled slightly in moments, and I took long pauses between some movements. On one step, my feet took a skid into the muddy rice pond on my left. I continued a slow pace of balancing one foot in front of the other, always hopeful that the path would soon widen, though it never did. 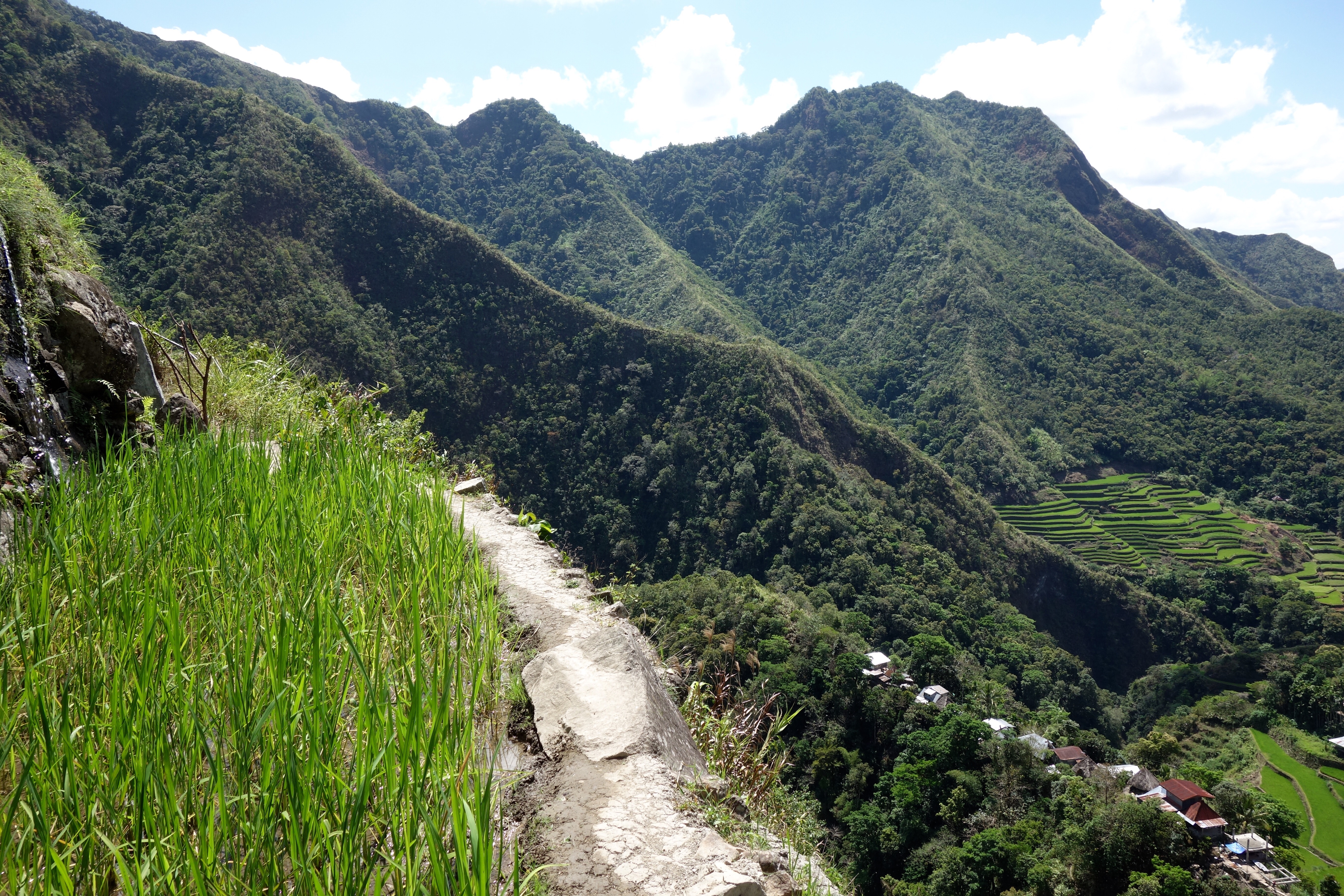 Eventually, I made it to the hut at the other side. There, a  Filipino man sat talking to the shopkeeper about some knives he was selling. I sat on a wooden bench with my back to the shop taking in the view of the rice terraces. The shopkeeper’s five- or six-year-old son tugged at my sweaty ponytail of hair. When I turned to him and smiled, he did things like poking me in the cheek or wrestling with one of my fingers in a not-so-playful way. His father had a front tooth covered in silver with a cutout of a heart. He let me relax at the shop and attempt to get the mud off of my shoes. He showed me the path I should have taken, one where there was an irrigation wall to use for support as you walked across the narrow ledge. Yes, I now remembered, the person giving me directions earlier in the morning had mentioned that wall. I watched a couple follow the same path I had just taken across the terraces, only with significantly more ease. 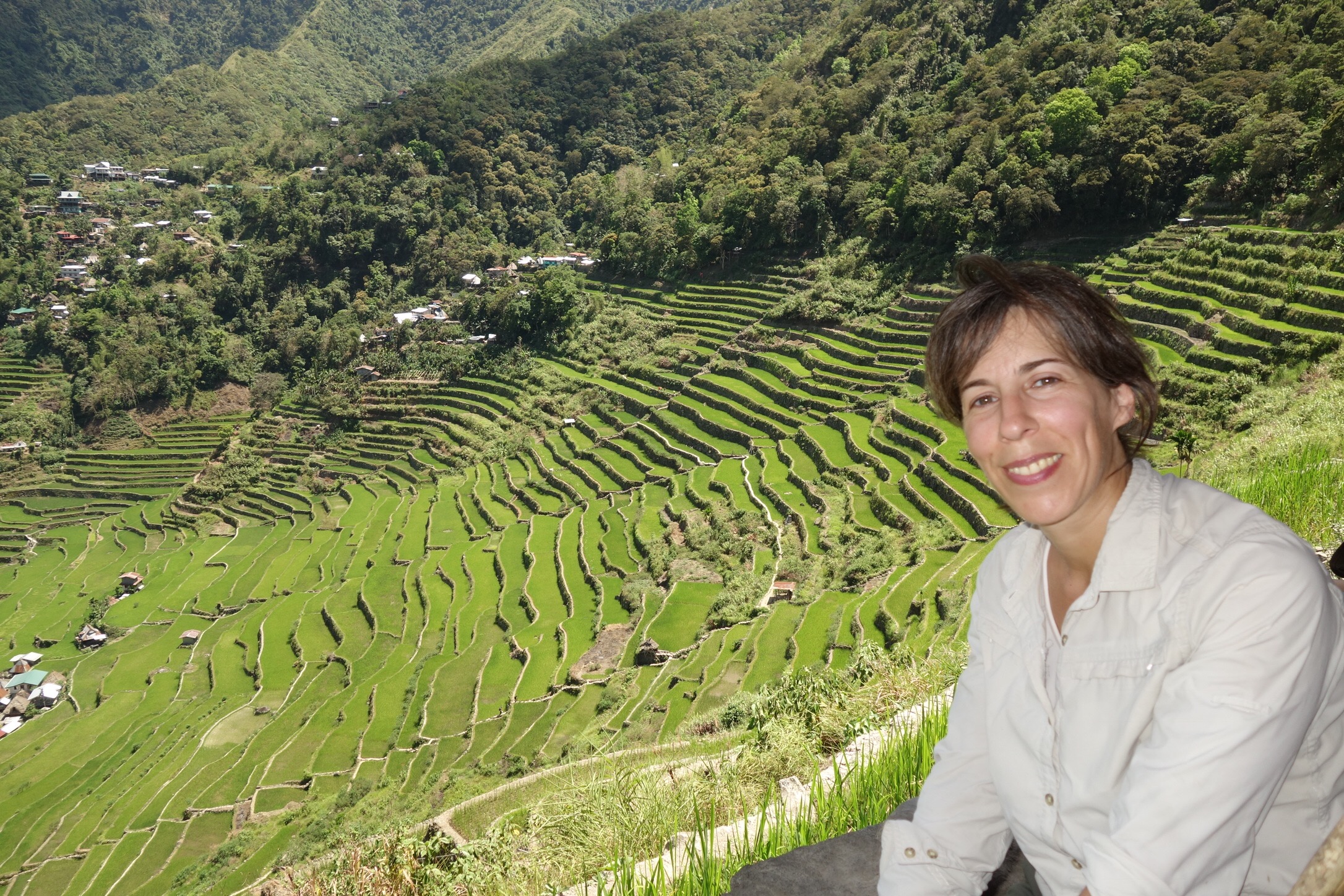 At the hut after I made it across the terraces

From the hut, the trek to Cambulo was challenging but straightforward. As I walked, I listened to the rush of the waterfall far below and the soft scamper of lizards darting away from my steps. I heard the rustle of the wind through the trees, birds tweeting, and the huff and puff of my own breath. I stopped to watch a butterfly fluttering through the grasses of a rice field. I felt the sweat continuously seeping from every pore and the thump of my heart as I got to the top of the steepest segments. Several climbs and another rice terrace ledge later, I had made it to the village of Cambulo. I guzzled water I bought from the only homestay in the village and turned around to make the return trek.

When I arrived back at my homestay in Batad, I looked back over where I had come that day—past the coconut tree, through the jungle, across the tiered rice terraces, up and down mountains and across another set of rice terraces. I could have hired someone to guide me. I could have avoided the balance beam walk through the rice terraces. But there is nothing like making your own way in nature—to listen to its sounds, to observe its details, and then to sit back and see how far you came, trembling legs and all.

Travel Notes: In Banaue, I stayed at the Banaue Homestay for three nights. It is located just outside of the town center—though within walking distance—and has beautiful views of rice terraces. The owner, Beatriz, was helpful in connecting me with a tricycle driver to take me to various spots around Banaue. If you are short on time, you could stay just one night in Banaue and still see the main sites.

In Batad, I stayed at Ramon’s Homestay for two nights. Many people come to Batad only for a day visit. I think it is worth a stay of at least one night, and you can easily fill your time with two nights. There are multiple homestays from which to choose. Ramon was friendly and works hard to share the traditional Ifugao culture with his guests. I also had a gorgeous view of the terraces both from my room and from the restaurant, though I think many of the homestays have similar views. 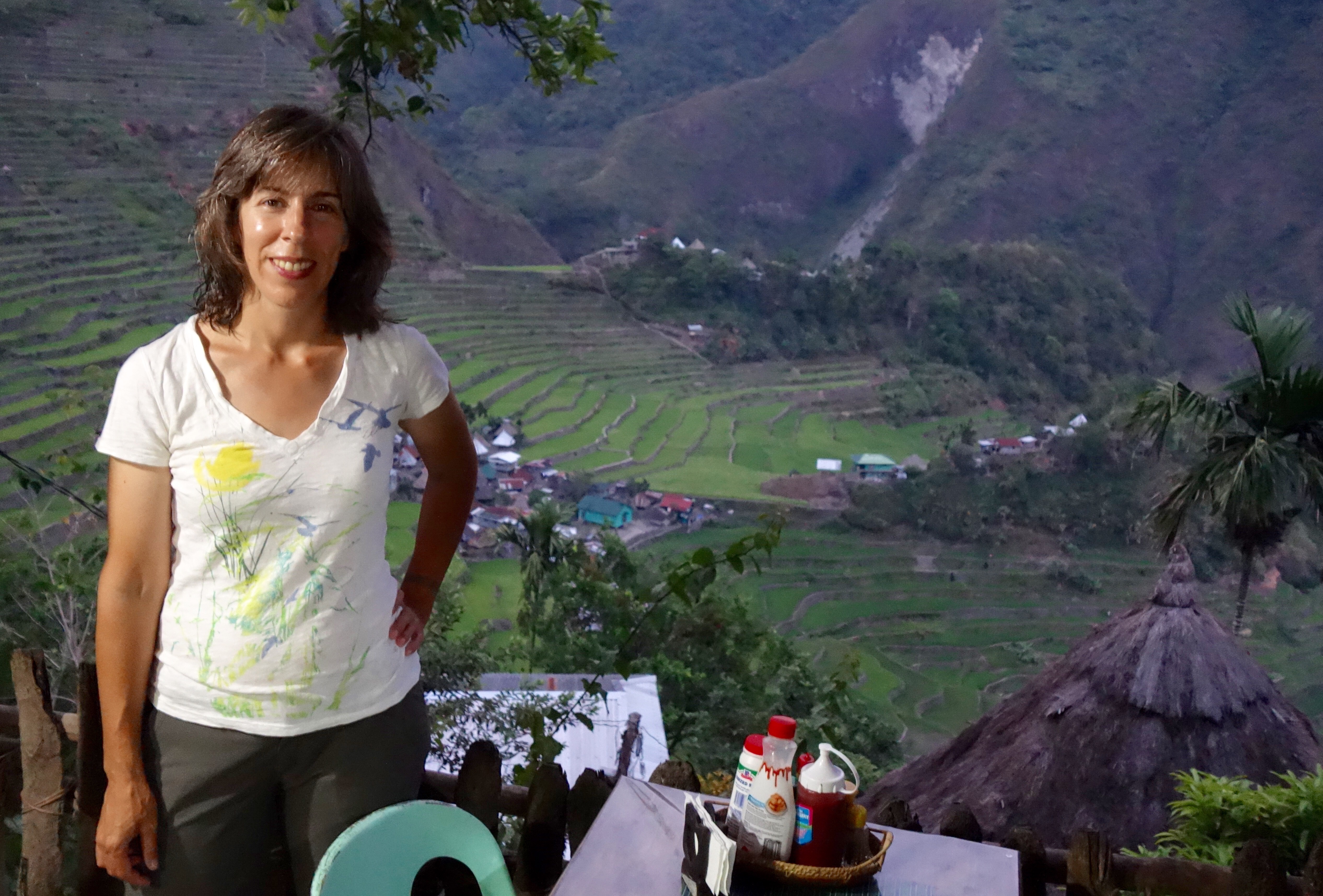 This was taken at the restaurant at Ramon’s Homestay

As I mentioned, I got to Banaue by the Ohayami overnight bus from Manila. To reach Batad, I took a tricycle from Banaue. From Batad, I took a jeepney back to Banaue, where I got a minivan to Sagada, a beautiful and inexpensive mountain town where I relaxed for a week before heading back toward Manila, breaking up the travel to Manila by staying in Baguio City for two nights. If you stay in Baguio City, I recommend the Baguio Village Inn as an excellent budget accommodation.

Last, if you are looking for a tricycle driver/guide in the Banaue/Batad area, I recommend Sherwin. He can be contacted via Facebook under the name Erwincarl Dumalilis.