One Foot in Front of the Other: Walking Naxos & Koufonissi

The wind was strong enough to keep the sailboats docked and to make the shutters covering the balcony doors squeak and bang. It nixed any snorkeling plans, but thankfully I hadn’t only come to Naxos to swim.

In fact, I had settled on Naxos in part because of its extensive network of trails—some in the port town, Hora, and many spreading from small villages in the interior of the island.

Naxos is the largest of Greece’s Cycladic islands, as well as the greenest. Its hills hold olive and citrus trees, and it is known for its citron liqueur and quality marble. In the village of Apiranthos, the narrow—and mostly empty—pathways that connect people’s homes feature stairs made of the stone. 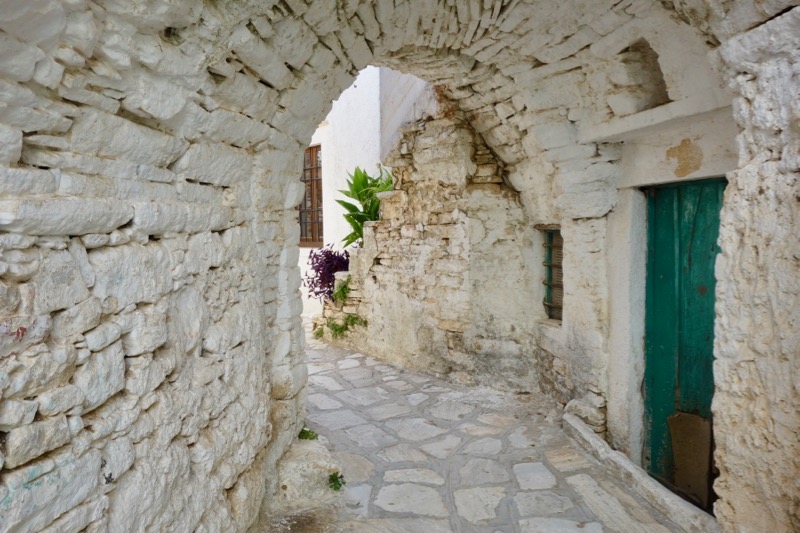 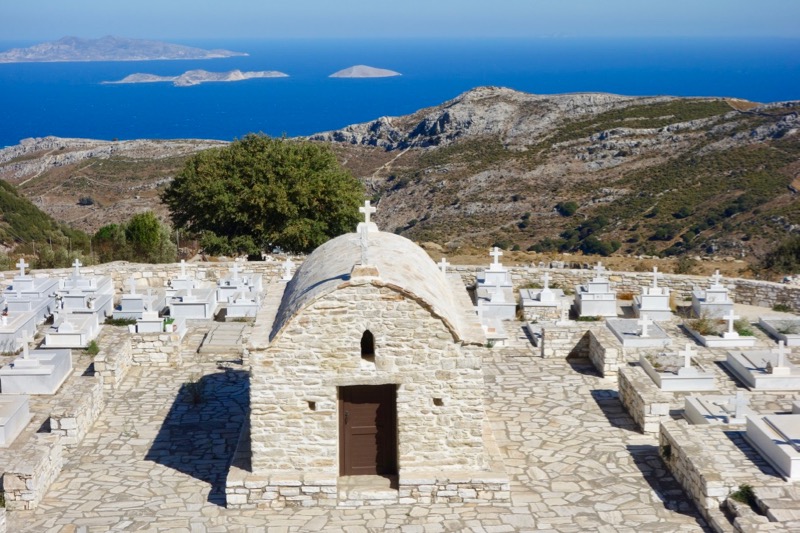 A view on my walk near Apiranthos

Each day, I paired a walk with time in a nearby village, where flowers and painted doors added pops of color against white buildings and blue skies. The dirt trails outside the villages took me past quiet farms, abandoned houses, olive groves, and gigantic oak trees. Periodically, the trails offered views of the Aegean and surrounding Cycladic islands, and periodically I got lost, ending up in a dry riverbed filled with large boulders at one point and in the midst of boxes of buzzing beehives at another. I punctuated my walks with outdoor meals at family-run tavernas, tearing off fresh bread that I devoured with plates of gigantes, tzatziki, and tender lamb with vegetables.

Mt. Zas, the highest peak on the island (1,001 meters), was my first destination. The bus dropped me at Agia Marina. From there, I climbed a winding road with views of the valley and churches perched on lower mountain tops. The air was warm and dry. Once on the trail, I passed farms, and as I climbed, mountain goats grazed along the rocks and paused to eye the intruder. 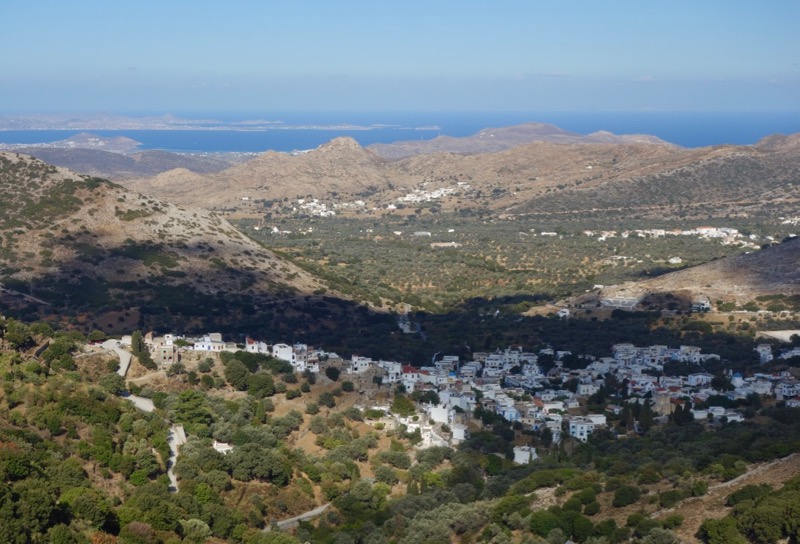 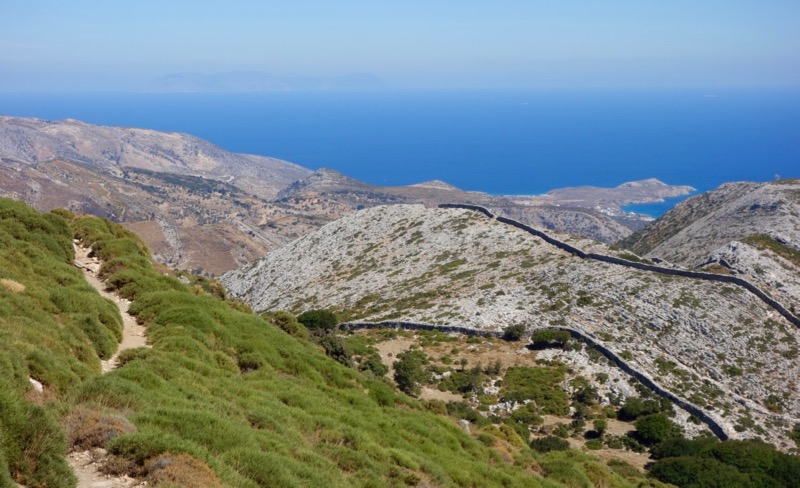 On the way up Mt. Zas

Near the top, the trail got more rocky, and cairns guided me to the peak, where a man sat by himself. He worked on a sailboat taking passengers around the Cyclades, and this was his break at the end of the season.

The day was clear, and he pointed out other islands, including Paros, Ios, Iraklia, and Koufonissi. I sat on a rock enjoying the spaciousness of the panoramic views along with the colors of the deep blue water paired with the green on the mountains. 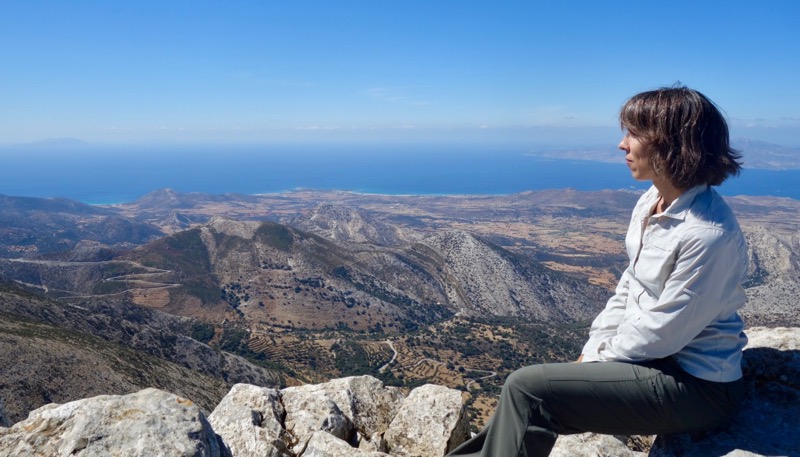 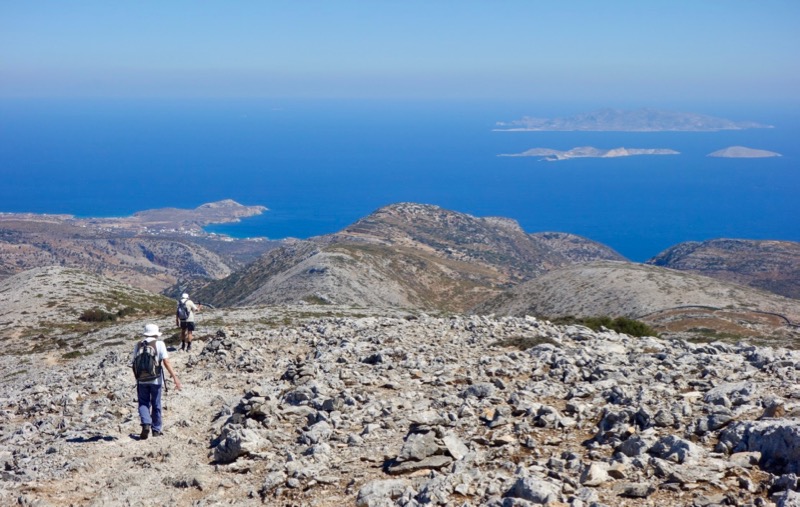 Coming down from Mt. Zas

At last, I had my best chance to swim in that water a few days later. The winds were still gusting on Naxos, but I booked a spot on a large boat that motored to Iraklia and Koufonissi for the day. 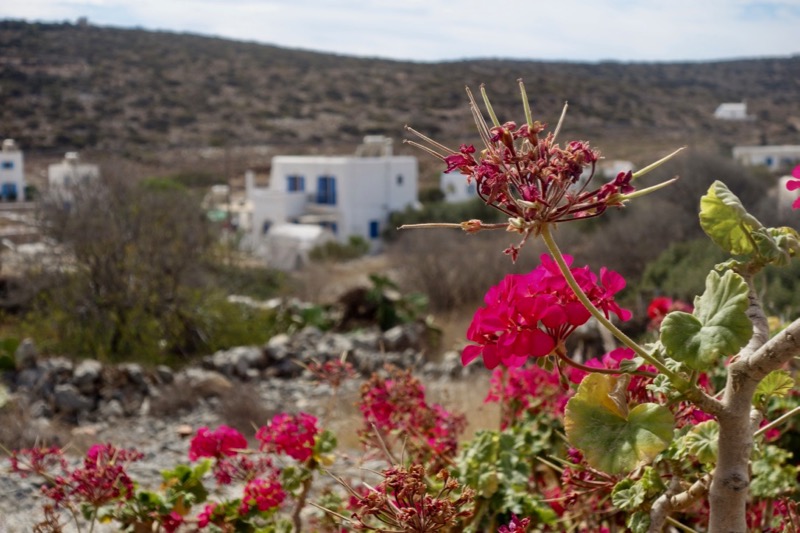 On a walk on Iraklia

Even before we docked on Koufonissi, its colors struck me. I peered through a porthole to see the water in varying shades of a milky light blue. As I walked toward the main town, I passed steps painted a crisp white with bougainvillea petals dusted in their corners. 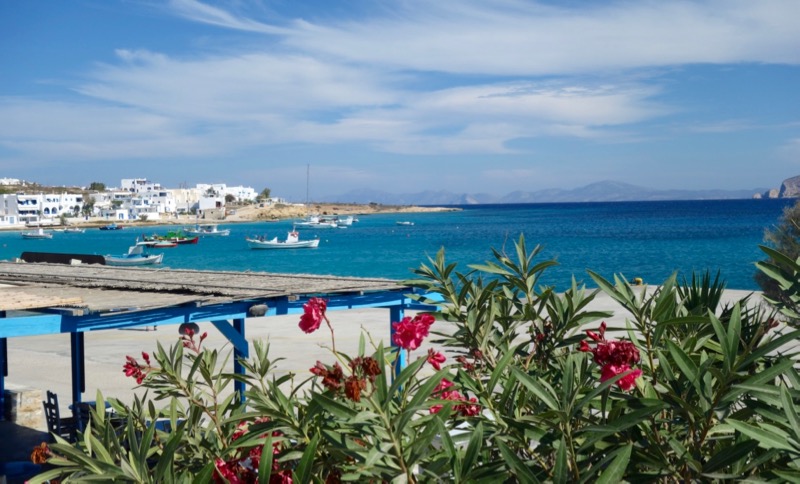 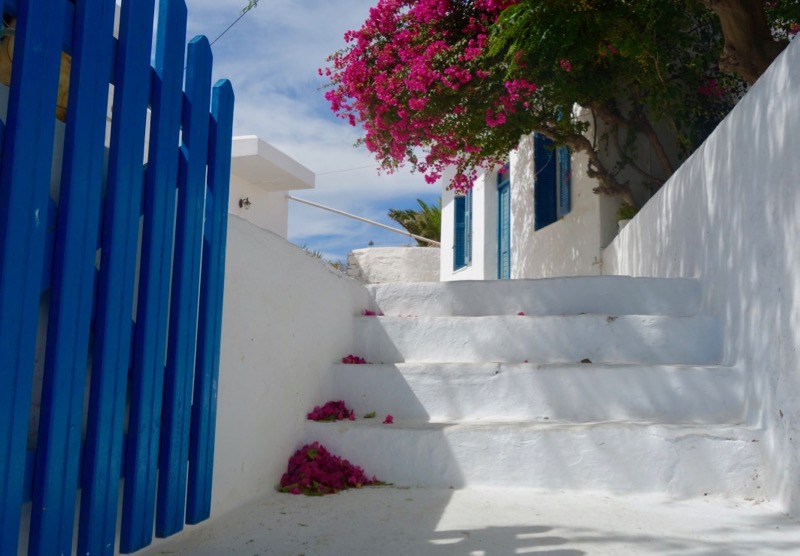 I met some fellow travelers on the boat and joined them for a lunch of Greek salad and calamari at the only open restaurant. One of them, a British man, had a beard and balding head of black and gray windblown hair. After a month on the islands, his skin was so dark that he had taken on the look of a Greek fisherman.

He mentioned a trail that ran along the perimeter of the island, and after lunch I made my way there. It alternated between golden sandy beaches—the most beautiful of any I saw in Greece—and a wide dirt and gravel path. Rocky cliffs hung over the sea, creating coves where clear green water brushed along the shore as the sun reflected off of it in flashes of gold. A few men fished at the edges of the cliffs. There was little wind. At last, it was the ideal moment to jump in the water, but my feet kept moving to see more of what was around each bend. 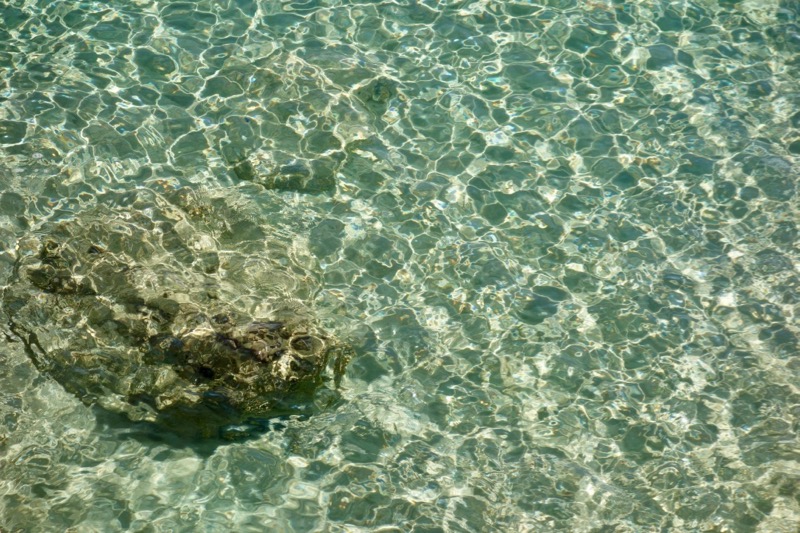 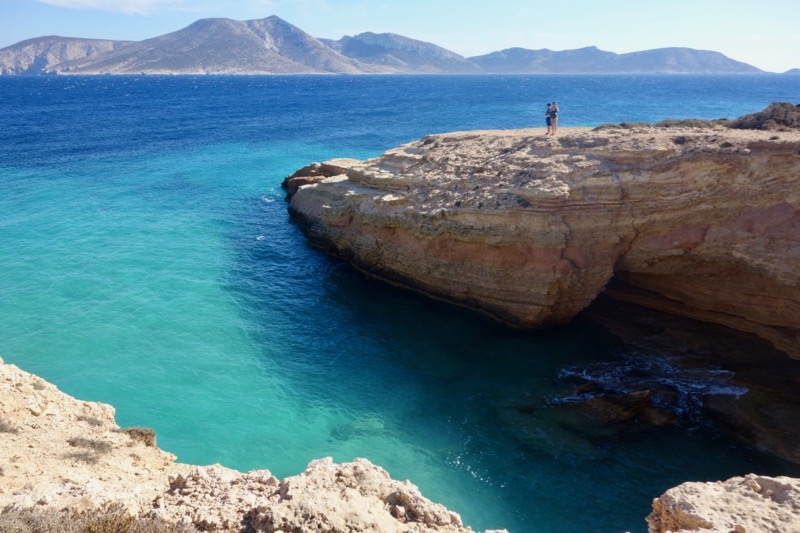 Getting to the Trails: Naxos has a good bus system that you can use to reach the villages and many of the trailheads. You need to buy tickets before you board, and you can get them at the bus office in the port area or at many small grocers in town. The price varies depending on the distance you go. Of course, if you can rent a car, that is more convenient.

Cycladen is an excellent website for information about walks on Naxos and other Cycladic islands. Trails are marked, though some are better marked and easier to follow than others. These are the walks I did on Naxos:

Apiranthos: I took the bus to Apiranthos, had lunch in town, and then wandered through the village and on a trail of a nearby mountain. You will see on the website that there are various trails you can take to or from Apiranthos. I arrived there somewhat late in the day and just made my own walks for the time I had. The bus takes roughly an hour to get there, so it is best to get an early start to give yourself plenty of time to explore.

Mt. Zas: The bus dropped me off at the stop for Agia Marina, where I walked to the trailhead to climb Mt. Zas. Despite being a climb to the highest peak on the island, this route was not particularly difficult (I have read that there is an alternate route that takes you past Zas cave that is both more challenging and harder to follow). When I came down, I walked the road to Filoti, where I had lunch and strolled the village. 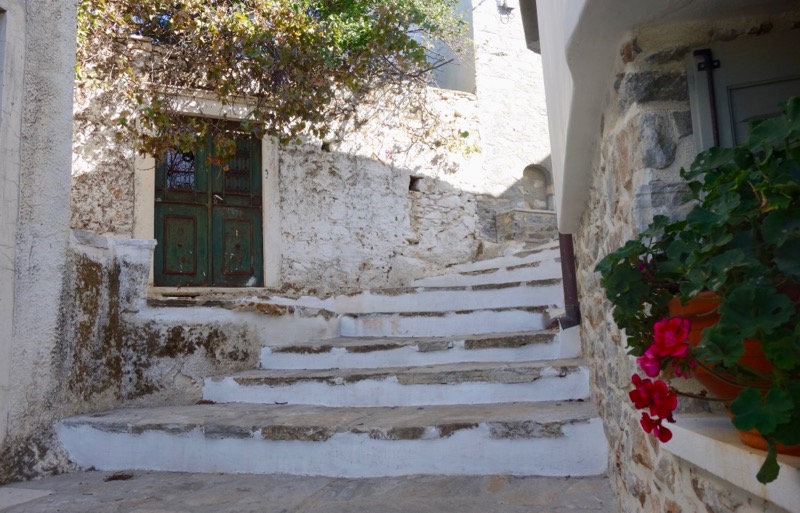 Halki – Panagia I Drosiani – Moni – Kaloxylos – Halki: Halki is the first of the charming villages you reach along the bus line that eventually takes you to Apiranthos and beyond. That also means it gets more visitors, but the trail was quiet. I walked past olive groves, farms, churches, and abandoned homes. When I reached Moni, I stopped for lunch at To Panorama, which has beautiful views of the valley and small villages. After, I popped in some shops to see the textiles Moni is known for, and then made my way past huge oak trees and through quiet villages as I headed back to Halki. 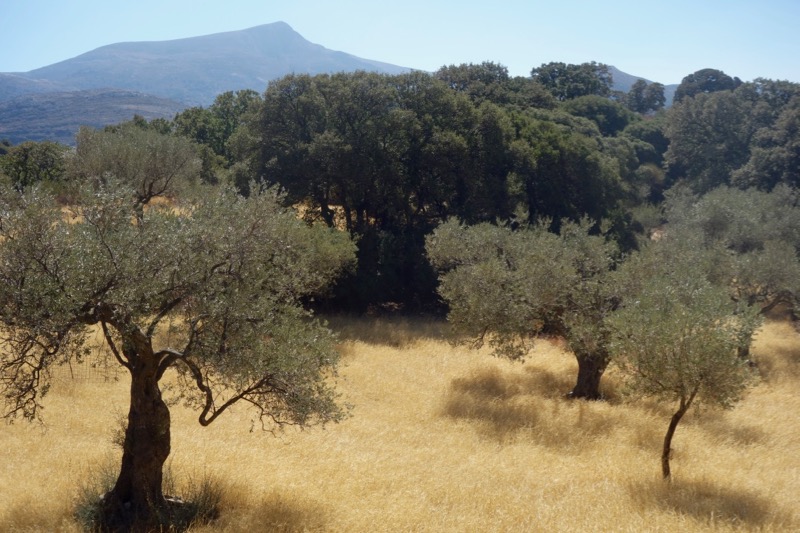 Olive trees, with Mt. Zas in the distance 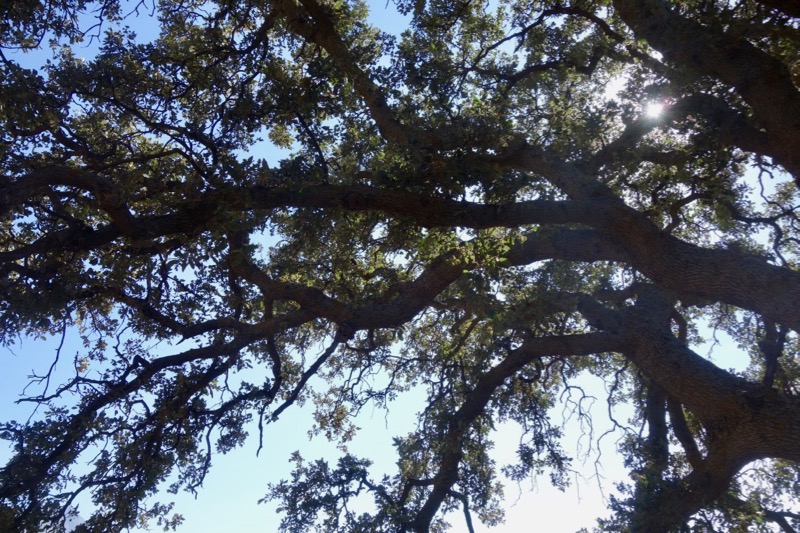 One of the oak trees along the trail

Koronos – Bay of Lionas – Koronos: Koronos is more than an hour on the bus from Hora (it is past Apiranthos), so it is another trip where you will want to get an early start. I did not take the earliest bus, and between that and some wrong turns on the trail, I didn’t make it to Bay of Lionas. It is a peaceful walk with views of the sea, mountains, and farms, and I saw only two other hikers on the trail. I finished off the day with a late lunch in Koronos at I Platsa, my favorite meal on Naxos both for the delicious food and the wonderful hosts. 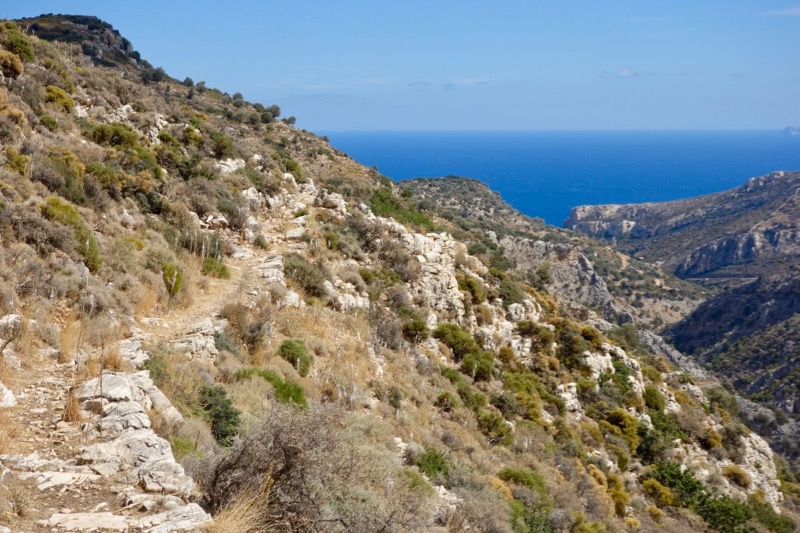 Heading toward Bay of Lionas

Each of these walks has something to offer. But if you have only one day, I might pick the Mt. Zas trail and then see if you can get to Apiranthos afterward for lunch and exploring the village. If you can’t get to Apiranthos, you can easily walk to Filoti, which is also a lovely village.

Have you done any trekking on the Greek Islands? Share your experiences and suggestions below! 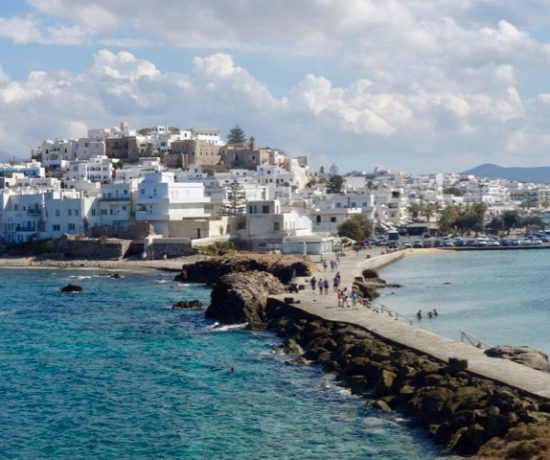