Like many people, I imagine, I made my way to Athens with visions of the Parthenon floating in my mind. And even after leaving the city, it is still one of the experiences that stays with me, along with visiting places like the stadium in which much of the first modern Olympic Games took place and the remains of a 5th century B.C. to 9th century A.D. neighborhood.

But together with its ancient monuments, Athens is also a city with plenty of modern grit. The first thing I noticed as I traveled on the metro from the port of Piraeus to the city center was building after building tagged with graffiti.

Some of the tags had a dash of style, but many of them were simply quickly sprayed scrawl. A notch above those tags was the street art that decorated some city walls. The best examples I saw were in Psirri, an area popular for its nightlife, where the creative work added color and life to the streets.

Modern life in Greece, of course, also includes the worsening refugee situation, and Athens gave me a chance to hear what life is like for some refugees living there. I met a Syrian couple anxious to hear the news of which country they would be moving to and fearful that the agency helping them might send them each to separate countries. They had barely enough money, the stress of not having a home or knowing what would come next, and could not work, but their situation was better than what many refugees in Greece are facing.

Athens was also the place I saw more of how the country’s economic problems have affected people. I rented a room from a woman in Exarcheia, a neighborhood known for its anti-government protests. The woman who owned the apartment had recently lost her job as an architect.

With little money for building, there is less work for architects, she said. She hoped to develop a freelance career in interior design but was concerned about her prospects. She had started renting out a room to travelers to supplement her income. Many of her friends, she said, had also lost their jobs.

Workers discovered the remains of that 5th century B.C. to 9th century A.D. neighborhood during the excavation of the building site for the outstanding Acropolis Museum (I highly recommend the free tours guided by archaeologists at the museum). The plan was to do more work on the site and open it to visitors by 2010. The austerity measures have left the project on hold.

The neighborhood is partly visible through a glass platform you walk on to reach the entrance of the museum. As you gaze through the floor at the former streets, homes, and baths, you can’t help but imagine the life that once took place there—and wonder what stories you might uncover under more of Athens’ busy streets. 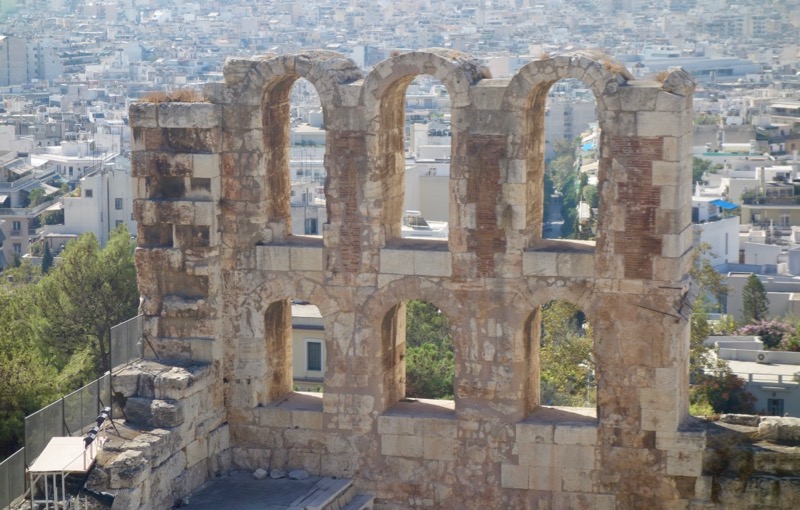 Athens as seen through part of the Odeon of Herodes Atticus 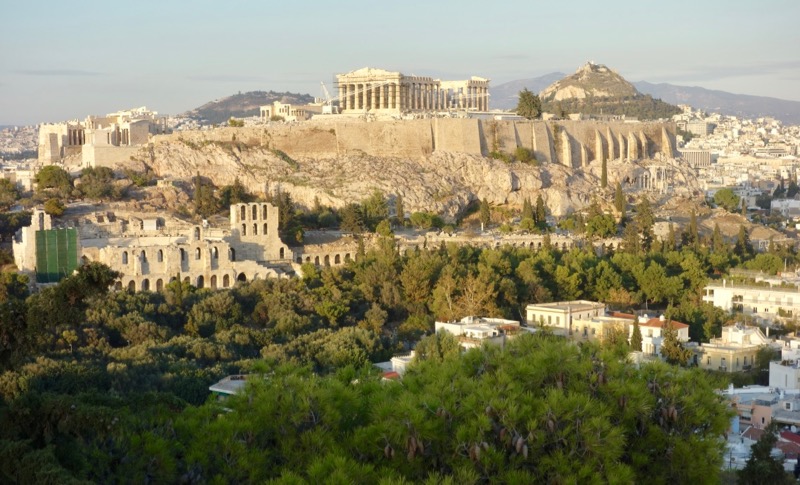 A view of the Acropolis from Filopappou Hill My favorite building at the Acropolis: the Erechtheion 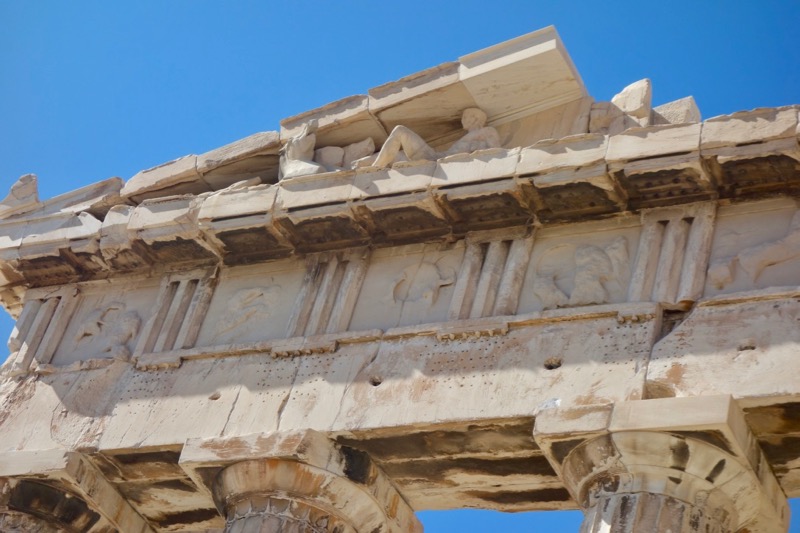 A part of the roof of the Parthenon 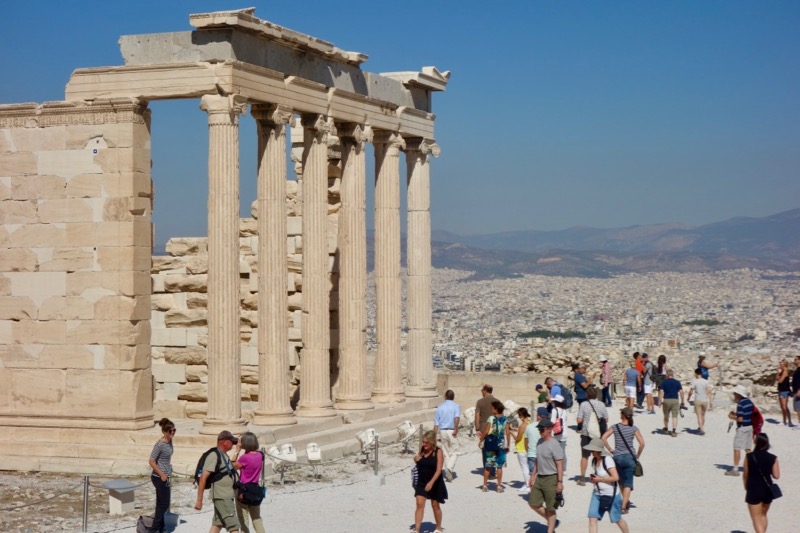 More of the Erechtheion The Temple of Zeus 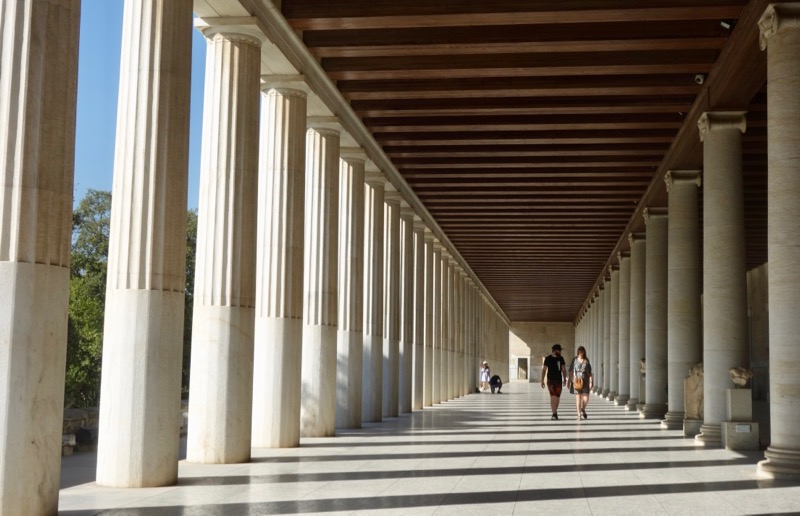 The Stoa of Attalos at the Ancient Agora 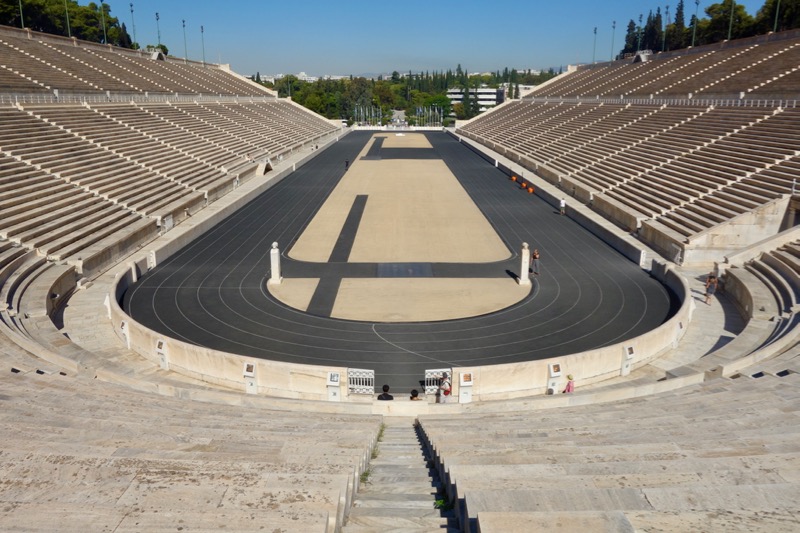 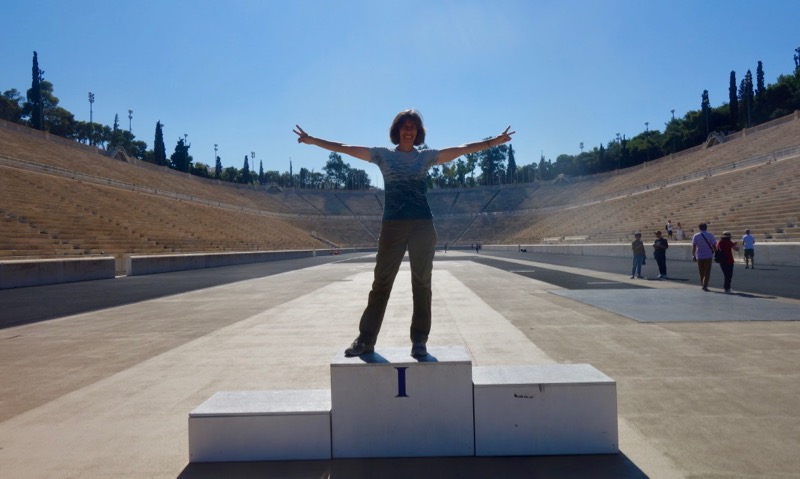 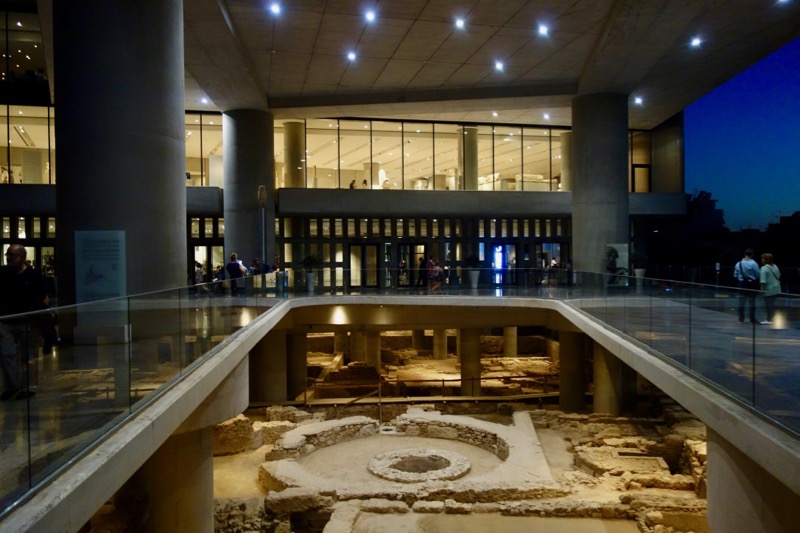 The Acropolis Museum and the ancient neighborhood beneath it 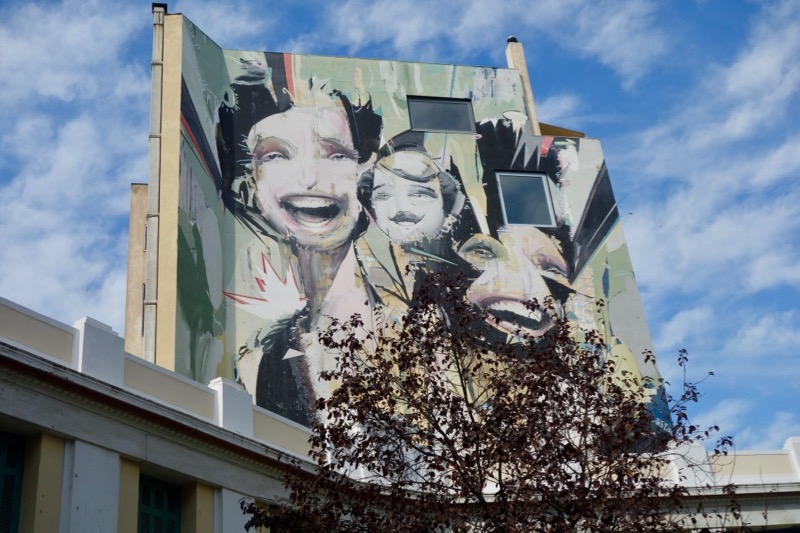 A mural in Psirri 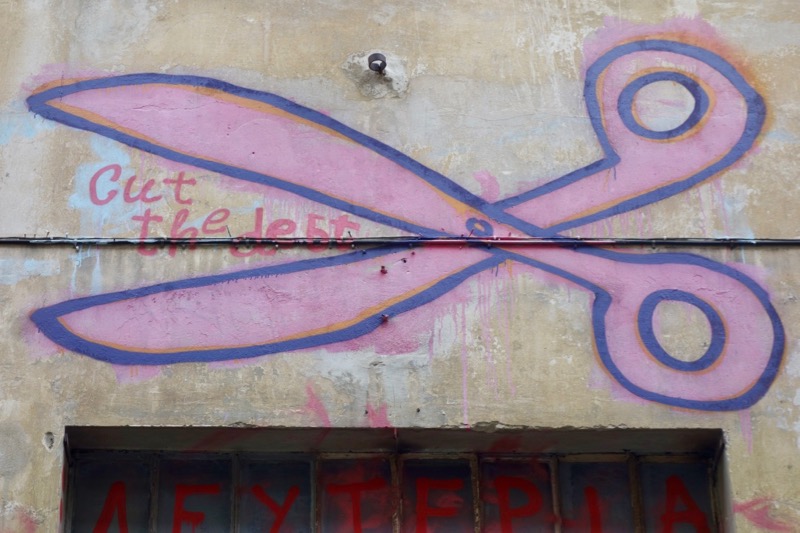 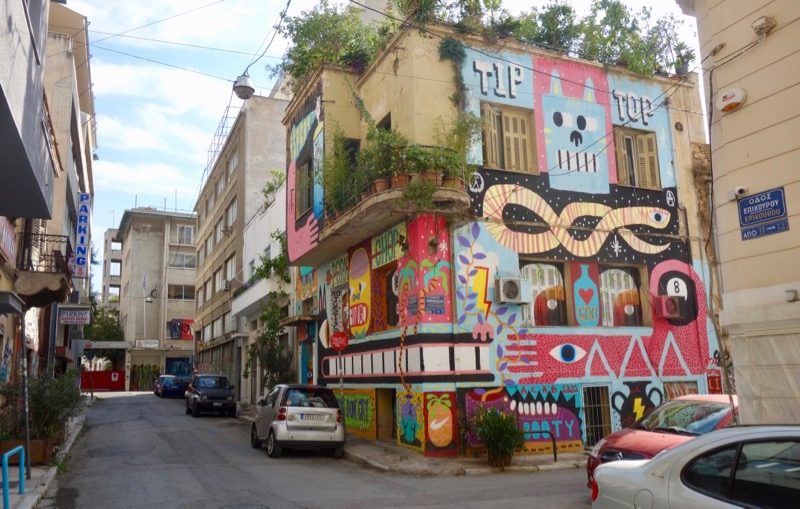 A street in Psirri 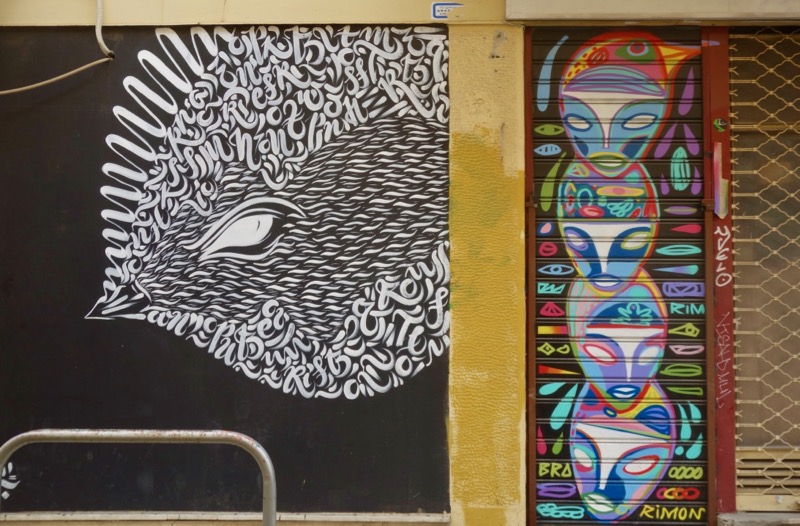 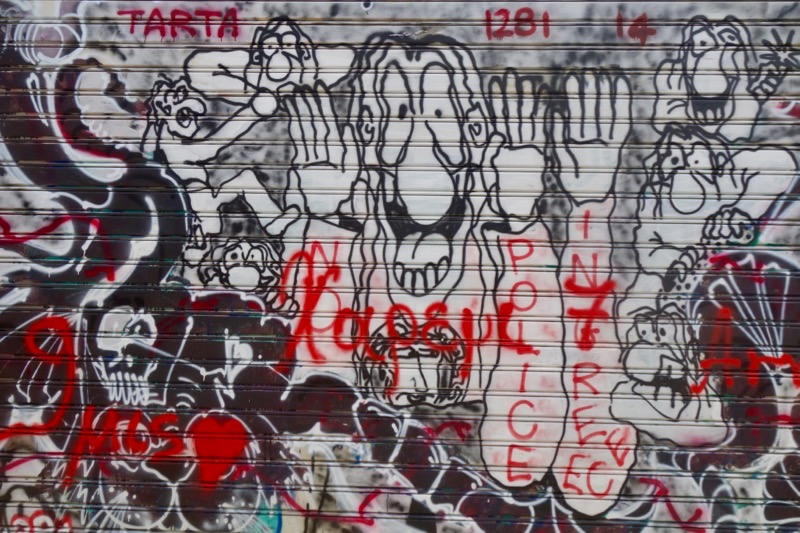 Most metro cars did not have graffiti, but the cars on the green line were covered in it. 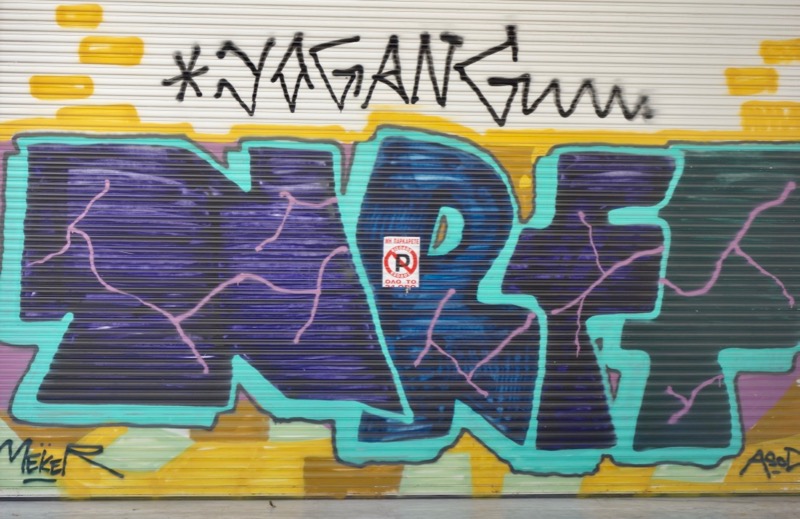 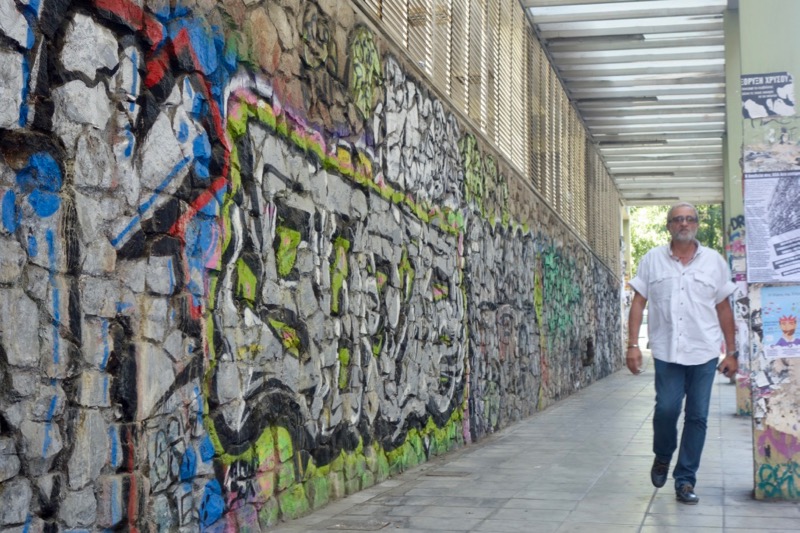 A man walking in the heavily-tagged neighborhood of Exarcheia 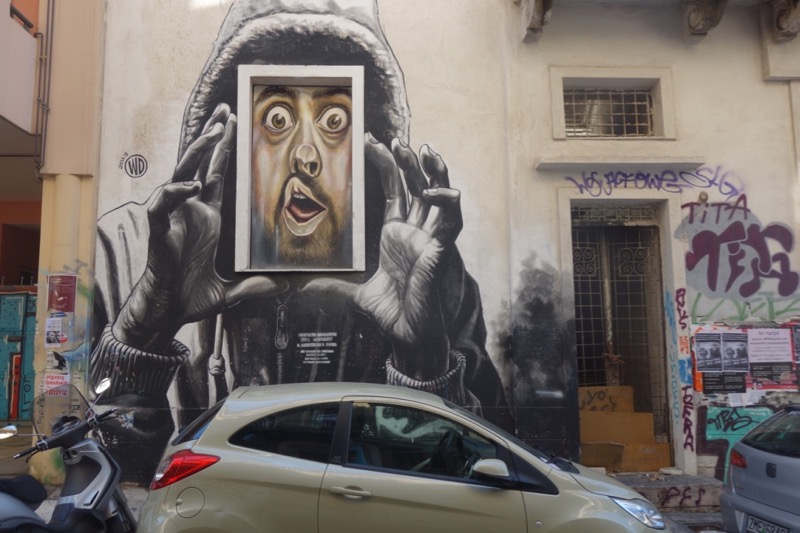 A mural in Exarcheia

Eating, Sleeping & Getting Around

I stayed twice in central Athens, renting a private room and shared bathroom each time off of Airbnb. It was the least expensive accommodation option I found ($15/$21 U.S./night).

As for food in Athens, my best meals were at a place called Savvas in Monastiraki. One afternoon I had a juicy and tender souvlaki sandwich for a cheap and quick bite. Another day I sat for a longer meal that included a dish of eggplant, tomatoes, and green peppers prepared with olive oil and vinegar; and chicken yaurtla–kebabs covered in yogurt and tomato sauce and sitting on top of warm pita bread. My meals in Athens generally ran from 10-15 € ($11-$17 U.S.), but that did not include alcohol. You can save more if you eat something like a gyro/souvlaki sandwich for lunch most days.

Getting around Athens is easy by metro and bus. As is usually the case, I found the metro faster, so you might want to consider that when you choose where to stay. This site is not an official government site, but it seems to have good information on Athens transport and tickets, including how to get to and from the airport and port.