“This—finish,” the man in the camouflage shirt and pants said to me as he made a criss-cross motion in front of his chest with his arms. I was walking in the Truso Valley area of Georgia, not far from the Russian border, and I knew this was coming—the point at which I would be told I had to turn back.

The border patrolman had light brown hair and a slight belly. He called over another patrolman, a tall and younger man with broad shoulders, large green eyes and a shaved head. He spoke a few more words of English. “You can go there,” he said, pointing to the crumbling stone walls of the Zakagori fortress on a hill to my right. “Then, when you come down, you can teach us some English,” he said, smiling. “Okay,” I agreed with a smile.

When I returned, it was lunch time, and the younger patrolman offered to share the meal—a small, fine-boned fish he said was only present in mountain rivers, along with bread and a homemade wine. 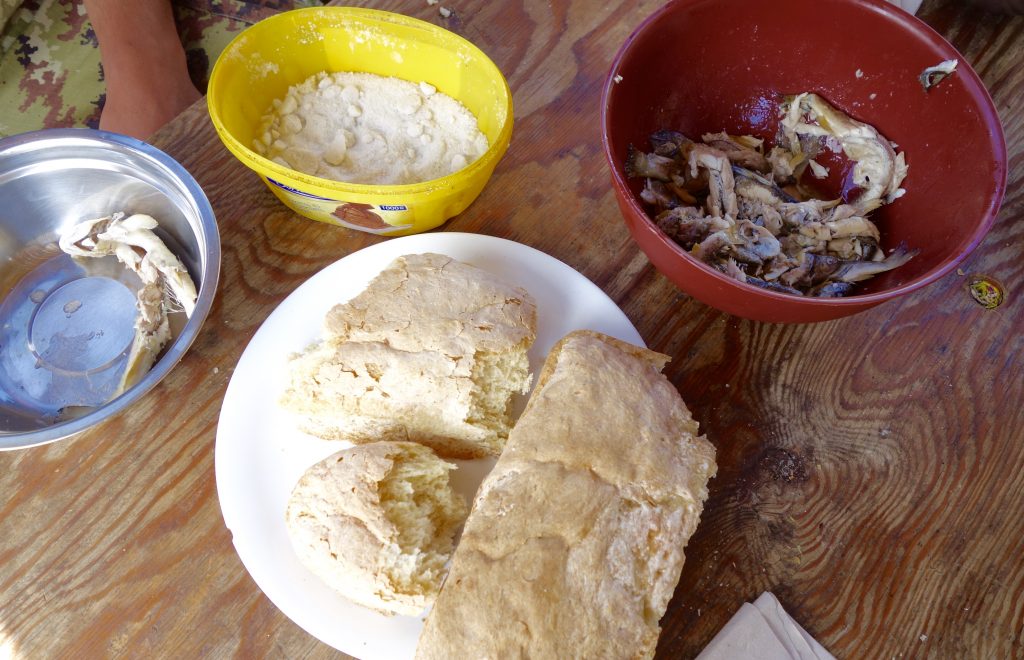 I had heard about Georgian hospitality from fellow travelers long before I arrived in the country. I got an early dose of it on the plane to Tbilisi when a man offered me his wife’s number in case I needed anything while I was in Georgia. At the airport, a man at a tourism kiosk stuffed my bag with pamphlets that touted the Georgian saying that “a guest is a gift from God.” It was one of the primary draws for me in coming to the country.

But while I experienced the warmth I anticipated in moments—the man on the plane, another man who, after I had asked him for directions to a home I could not find, had taken my number, tracked down the information and texted it to me later that day—overall I did not feel the open arms I had expected. The language barriers created shyness on both ends. There were few smiles or “gamarjoba” (hello) on the street. At the sight of my camera, I got suspicious glances and some spirited lectures. And when I made a mistake, there were immediate eye rolls and reprimands. One day, I attempted to throw out a large plastic bottle in the garbage bin outside a supermarket (the place I had thought my Airbnb host had told me to dump trash). A worker scolded me in Georgian until I wrestled the bottle out of the can to take it someplace else.

Every time I had an encounter similar to the garbage bin incident, I remembered the words of a Ukrainian woman I had met early in my stay: “Georgians are passionate and expressive,” she said. I began to wonder if Georgians were a bit like New Yorkers. New Yorkers are often accused of being gruff, but from having lived there, I know that is a misunderstanding.

It had taken me time to get to know New Yorkers. Undoubtedly, I needed time to get to know Georgians better, too—in particular to adjust to the surprise of things not being what I envisioned, to begin to learn the everyday customs and ways of thinking, as well as to learn that what could feel personal was not.

Meanwhile, it was in some of the more isolated spots in the country—trekking in Svaneti and eating fish with my hands with the patrolmen in the Truso Valley—that I felt more of the warmth I had expected.

Four of us sat at the lunch table—the two patrolmen, me and a monk from a nearby men’s monastery who got up repeatedly to check his phone in the one spot that was good for reception. We talked and joked in simple, broken sentences. They said they slept at this border post for two weeks at a time, then went back to their village of Gergeti. In the winter, the younger man said, the snow is so high that the post is closed, and he works at a separate post where he is brought in by helicopter.

Other than our small group, some cows grazing the land and a few dogs meandering near the river, the broad valley was empty. I had arrived around 9:30 a.m.—early by Georgian standards—by taxi from Kazbegi. The driver dropped me and a man with a red hooded sweatshirt at an area marked with white and pale yellow travertine rocks. 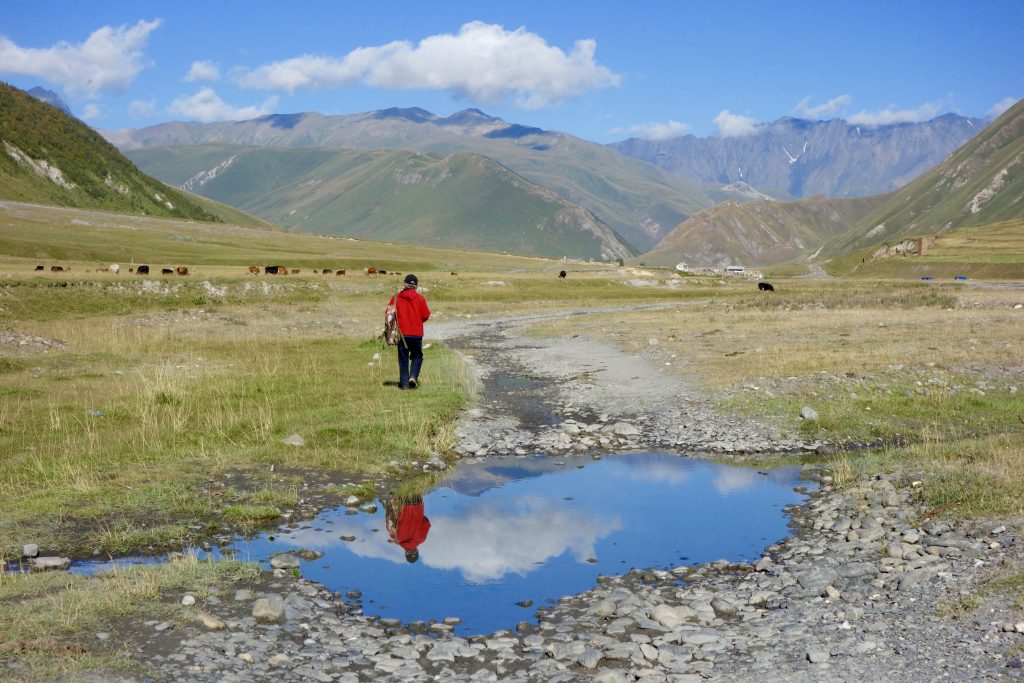 The man in the sweatshirt had black and gray hair and the stubble of an also dark but gray speckled beard. We picked him up hitchhiking on the Georgian Military Highway. He and I walked separately in the same direction and traded leading as I stopped for photos—of the mineral waters in rust, red and beige and the spacious valley with a river of soft gray water rushing on one side and tall green mountains as its borders. Across the river, a man led a large herd of sheep. 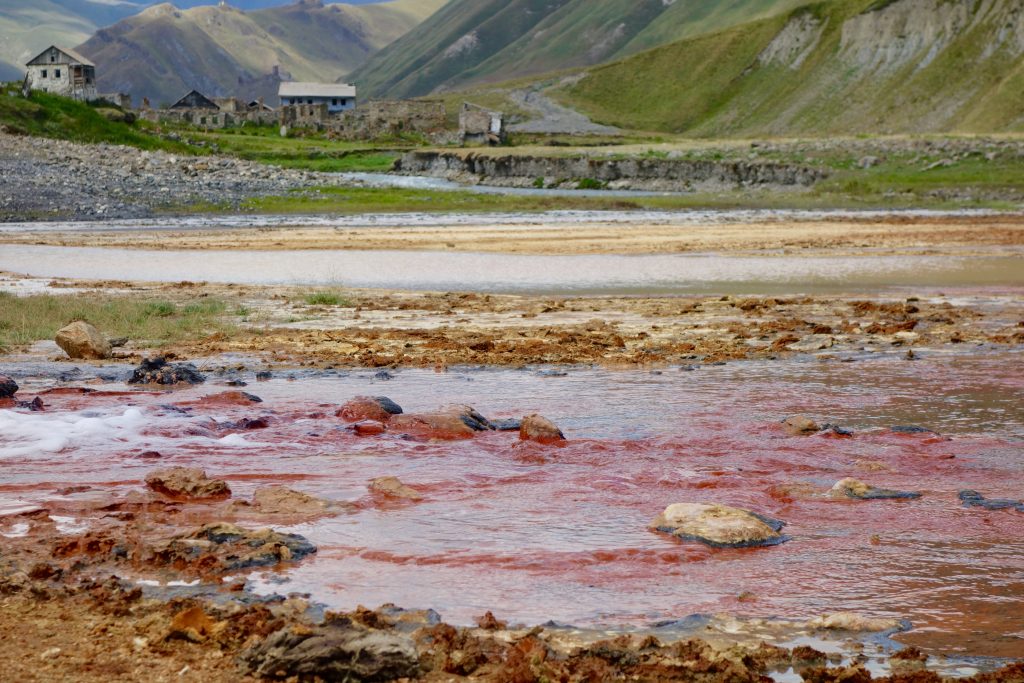 Mineral waters in the Truso Valley 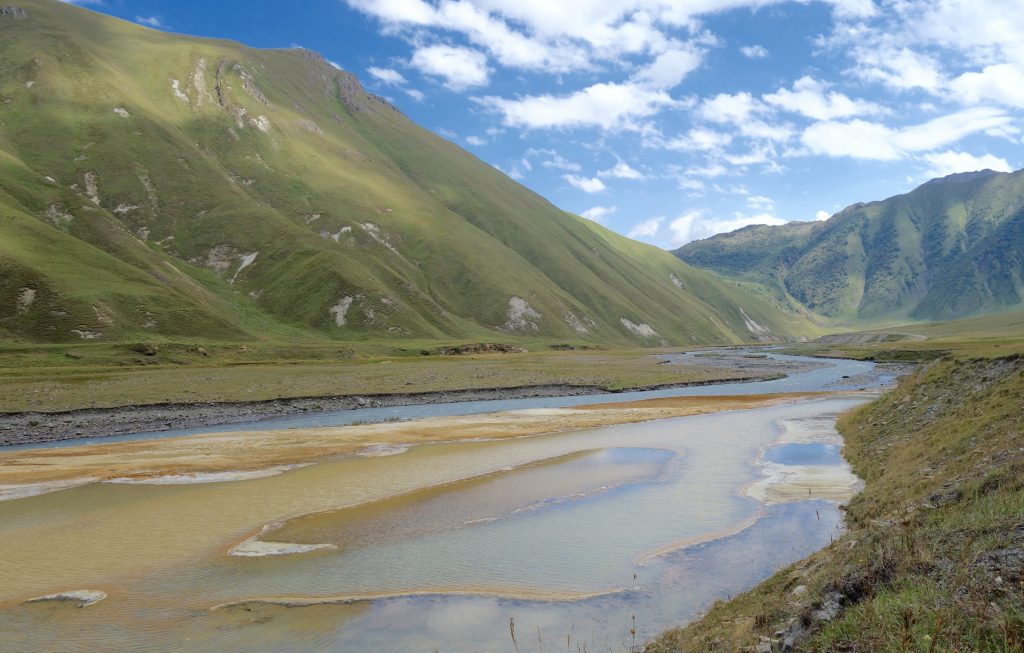 After a half hour or so, I arrived in the village of Ketrisi. The man in red sat on a log talking to another man and a woman in the tiny and mostly abandoned village. Ahead, a woman with dark hair who I guessed to be in her 20s chopped wood with an axe. Clear water poured in a stream toward the river. I saw just two families: a woman with two young boys dressed in heavy, dark clothing that seemed to suit the remote and rugged area and two men near the river, one of them older and with pale skin, who was bathing in what I imagined to be a chilly river.

As I continued, I passed a men’s monastery with a purple roof that matched the color of wildflowers in the field in front of it, as well as a women’s monastery. Soon, I ended up at the place from which I could only return, the border zone station. 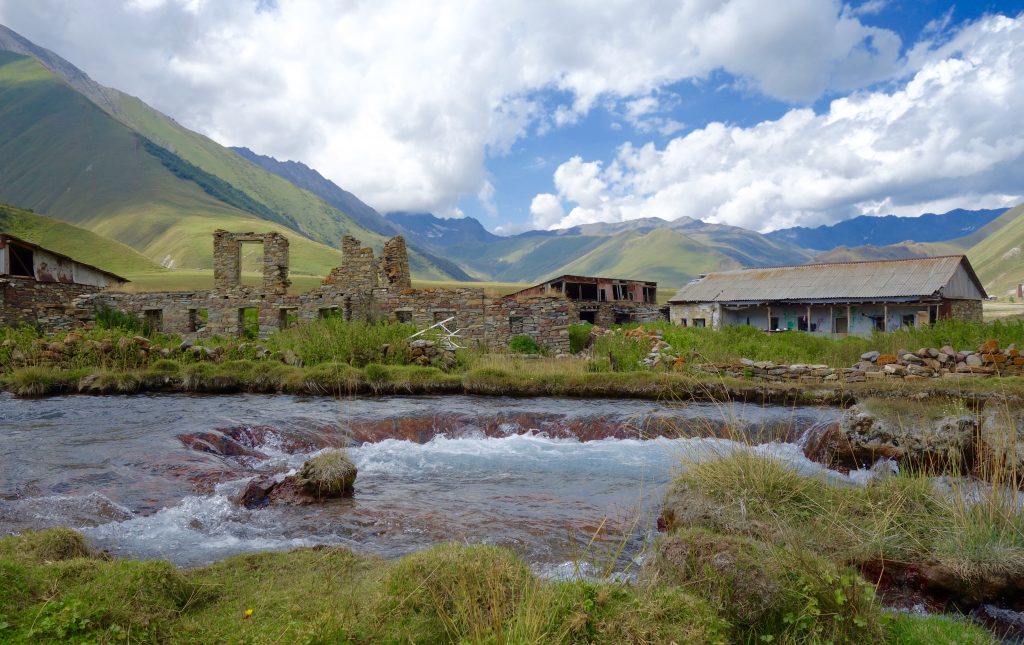 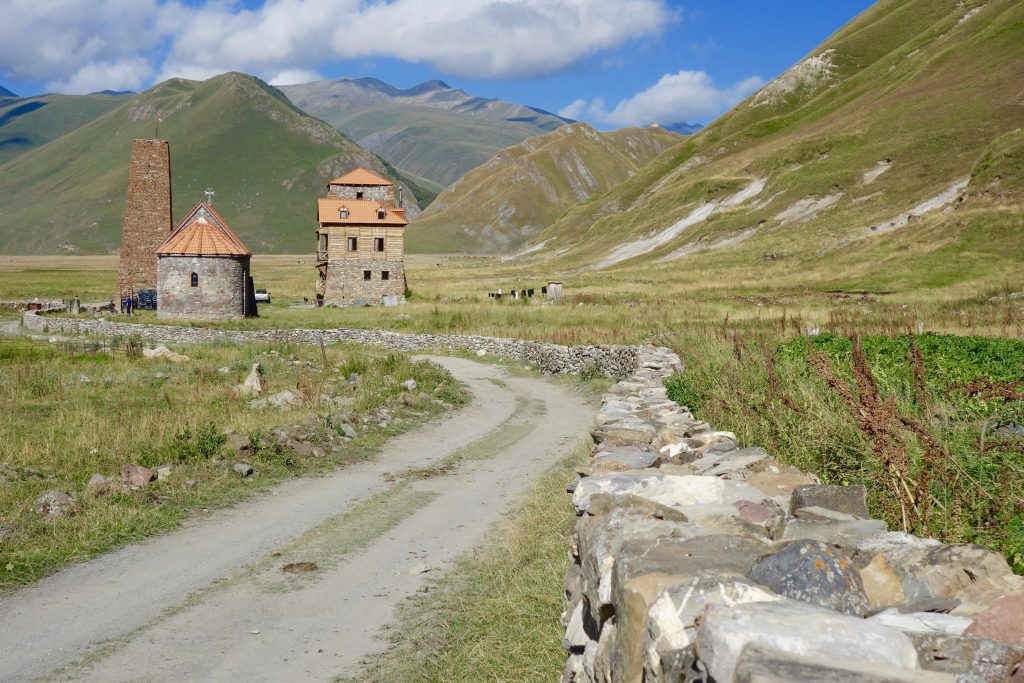 Walking toward the women’s monastery 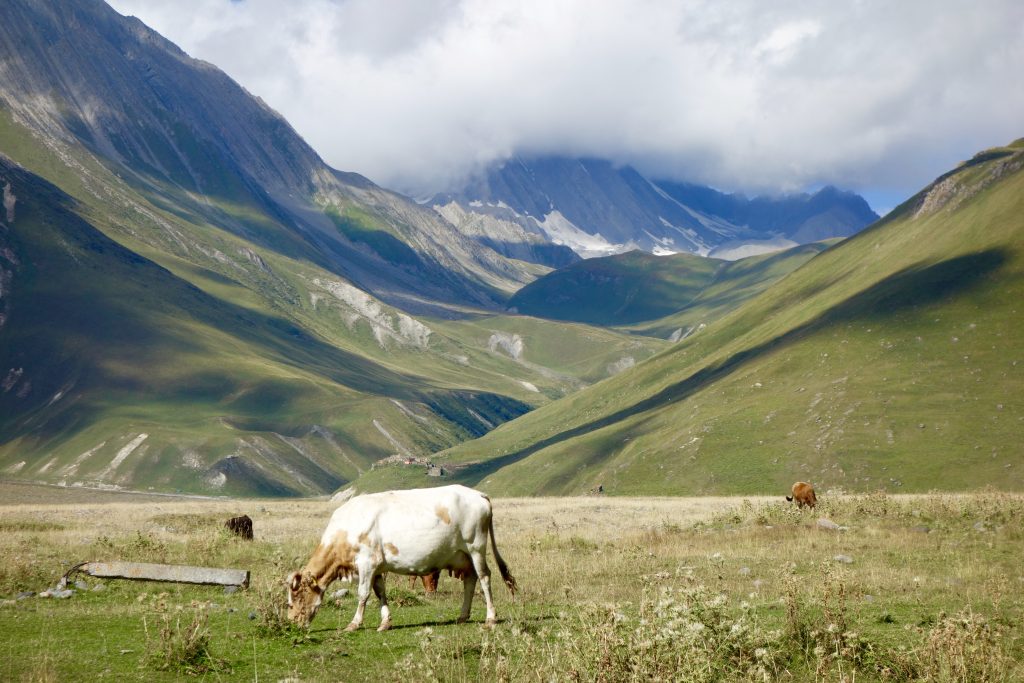 I lingered on the way back, knowing my taxi would not pick me up for several hours, and stopped at the women’s monastery. Two mixed St. Bernard dogs trotted my way, and a young woman dressed head to toe in black walked toward me, assuring me that they were friendly. The dogs sniffed intensely, their noses picking up the scent of khachapuri (bread filled with cheese) that I had stashed in my bag for lunch.

The young nun offered to show me the church. Inside, the walls were white and decorated with paintings. She explained that it had been destroyed many years ago and rebuilt only recently. She had been at the monastery for one year and lived with two other nuns. The three of them prayed together four times a day.

She invited me to stay for coffee, and we sat on the porch of the nuns’ wooden and stone home, the ceiling beams of the porch made from a dark wood with darker veins making wave patterns in each block of wood. I asked the young woman what drew her to the monastery. She said that having “things” could not give her what she gets from this way of life. 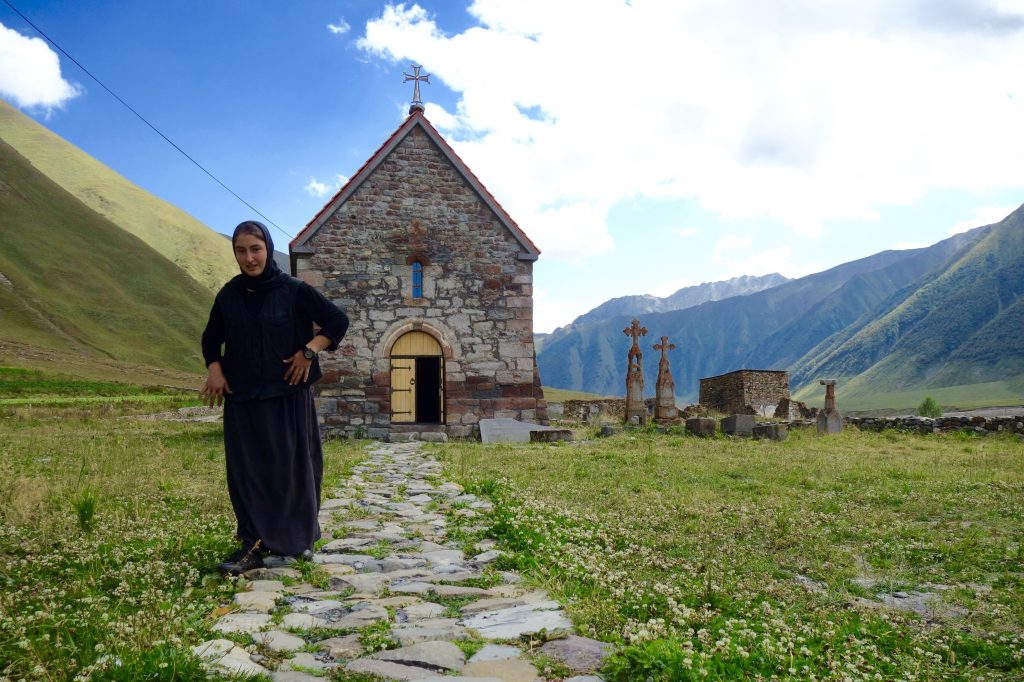 One of the nuns leaving the church near the monastery

As I walked back I thought about what it would be like to live in this vacant valley year-round, in particular in the quiet of winter with two meters of snow on the ground and presumably no one coming to visit. I passed through Ketrisi again. The same young woman who had been chopping wood earlier now sat on a log vigorously scrubbing a large metal pot.

It was roughly 10 days before I would leave Georgia. After nearly two months in the country, it still did not have that intangible feeling of a home, but I was beginning to find my way. I had learned a few more Georgian words and combined them with the use of props and hand signals when I needed to do things like find a place to sew my ripped pants or get the right size bandage for a cut. I had recently discovered an expat group I could join on outings. I knew where to dump garbage. I had relaxed more, which led to more smiles.

When I arrived at the travertine rocks, the taxi driver took me to Kazbegi. From there, I got a seat in the front of a marshrutka (minibus) to return to Tbilisi. A few minutes into the drive we stopped next to a man holding a briefcase-sized bag. The driver looked at me and pointed at the window toward the man. I rolled down the window, hoping the driver was not suggesting that the man share the front seats with me. Wrong. The driver chastised me in Georgian and pulled at my arm to bring me toward him. I scooted to the middle, with my legs squeezed next to the gear shift and my backpack on my lap.

There were two empty seats behind me. I looked at the driver, pointed at myself and then to the seats. Without understanding his next several sentences, I knew the answer was “ara” (no).

Soon after, we stopped again. The driver hopped out. An older woman sitting behind me saw me look at the empty seats and motioned to me to move there. I started to climb back, and the driver began his grumbling. This time, the older woman stepped in for the “guest.” They exchanged words, and then I was free to take my place next to the woman. As I settled in, she looked at me, smiled and patted my arm. I touched her arm and smiled back.

Truso Valley: I did the walk in the Truso Valley as a day trip from Kazbegi. I hired a taxi through Mountain Freaks in Kazbegi and paid 80 GEL for the driver to take me there and back. The drive took 45 minutes each way. From what I have seen, 80 GEL is a fair price, though you may be able to get something cheaper if you negotiate with the taxi drivers in Kazbegi. If you have people to share the taxi, that will bring down the cost since the 80 GEL would be divided by the number of passengers.

Getting to/from Kazbegi: Marshrutkas run multiple times a day from Tbilisi (Didube station) to Kazbegi and back. The ride was 2.5 hours and cost 10 GEL each way. I did not get a ticket in advance to go or come back. I just showed up and took the first available marshrutka.

Sleeping and Eating: In Kazbegi, I slept at Guest House Cico. It was the home of a friendly family. I paid 40 GEL for a single room and shared bathroom. They offer breakfast for 10 GEL, but they do not offer other meals. I had dinner in town at Restaurant Khevi, ordering a delicious soup called kharcho with rice, beef and herbs, as well as a plate of tender barbecued chicken and onions. Restaurant Khevi is also the place where I bought the khachapuri that the St. Bernard dogs were investigating. I highly recommend it.

Where have you experienced the best hospitality? What was it like? When have you struggled with settling in to a new place? How did you deal with it?