What is my favorite time in the airport? I am checked in and have made it through security. I find the nearest book store, where I plop my bag on the floor and scan the photos of the latest surfing magazines. While I have never been a surfer myself, I have long loved watching it—for the sense of synchronicity with the wave and that moment in time and for the sensation of something that feels wild, loose and free.

In my years in New York City, I got my surfing fixes by going to see photography shows focused on surfing, watching surfing documentaries and making summer treks to the Rockaways and Long Beach. When I decided to go to Bali, I knew I had to take advantage of the chance to see probably the best surfers I have ever watched in person. I researched where to go and settled on Uluwatu, an area in the south of the Bukit Peninsula of Bali that is famous for having some of the best surfing in the world.

It happened that one of the days I visited was the first day of the Uluwatu Boardriders Challenge. That morning, I sat on a stool just near the judges and the announcers watching heat after heat of surfers trying to score the highest points they could. Uluwatu is known for its multiple breaks, as well as its long and consistent waves. “They just kept coming,” I heard legendary surfer Gerry Lopez say of what he saw when he first came to Uluwatu, as he and Wayne Lynch, another well-known surfer from Uluwatu’s early days, spoke at a fundraiser for Project Clean Uluwatu that was hosted by the surf shop Drifter Uluwatu.

I learned what Lopez meant as I watched the competition. After a somewhat slow start to the morning, lines of long waves started rolling in, one after the other. The announcer called out, “Look at those lines! Uluwatu!” That afternoon, I returned and sat at one of many warungs (a local, often family-run restaurant) built into the limestone cliffs of Uluwatu. I slurped fresh banana juice through a straw and draped a sarong on my arms to block the searing sun. A fellow observer guessed the waves to be about six to eight feet—nothing gigantic but still bigger than what I had seen that morning. Surfers picked their waves, dropping down the face, some wiping out in ways that drew “ooohs” from the crowd, some going in the barrel of the wave to the point where you could not see them anymore, only to emerge later and continue to carve up and down the face of the wave to the crowd’s applause. Watching the best surfers that day gave me the sense that I was flying with them as they rode that moment with absolute focus. 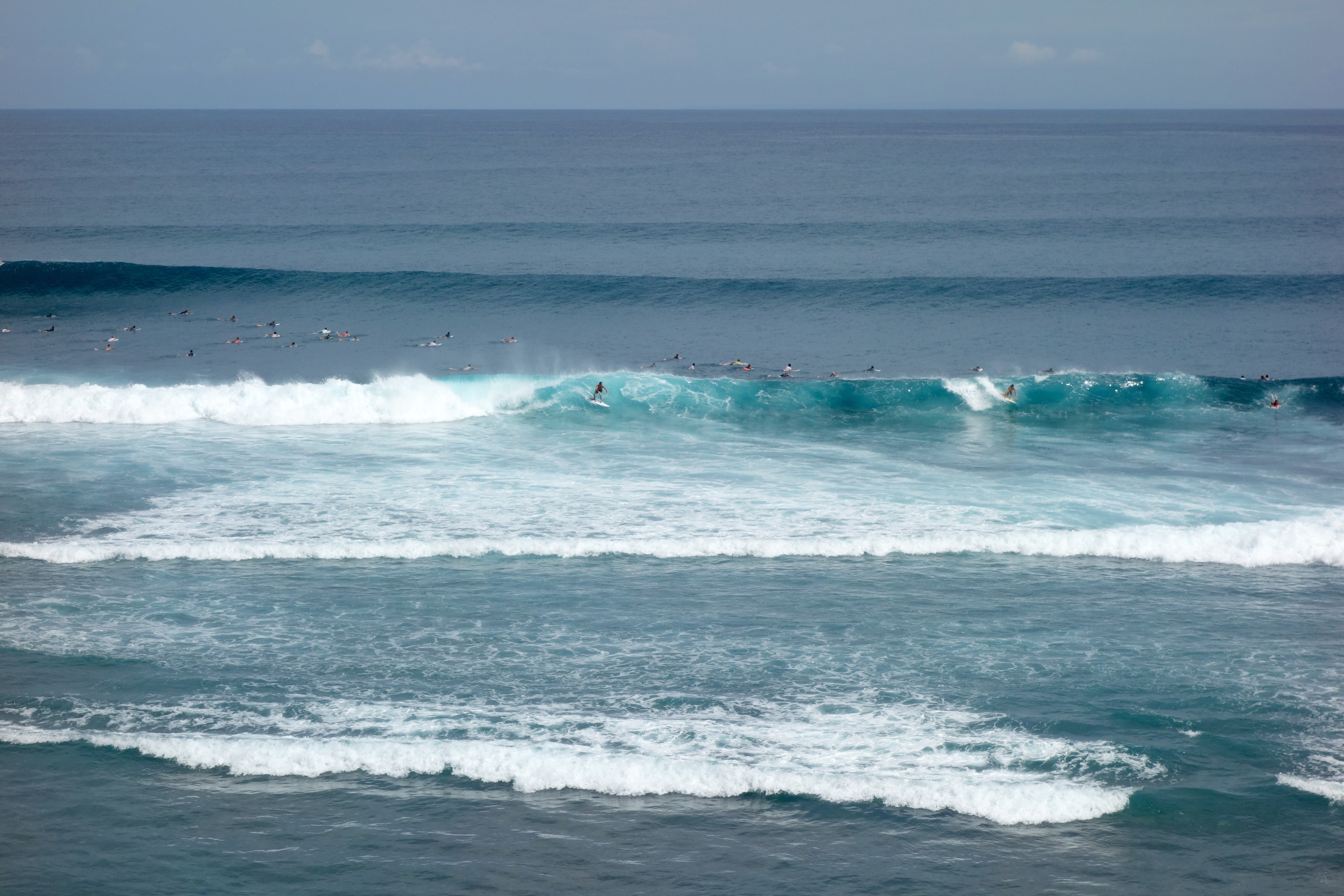 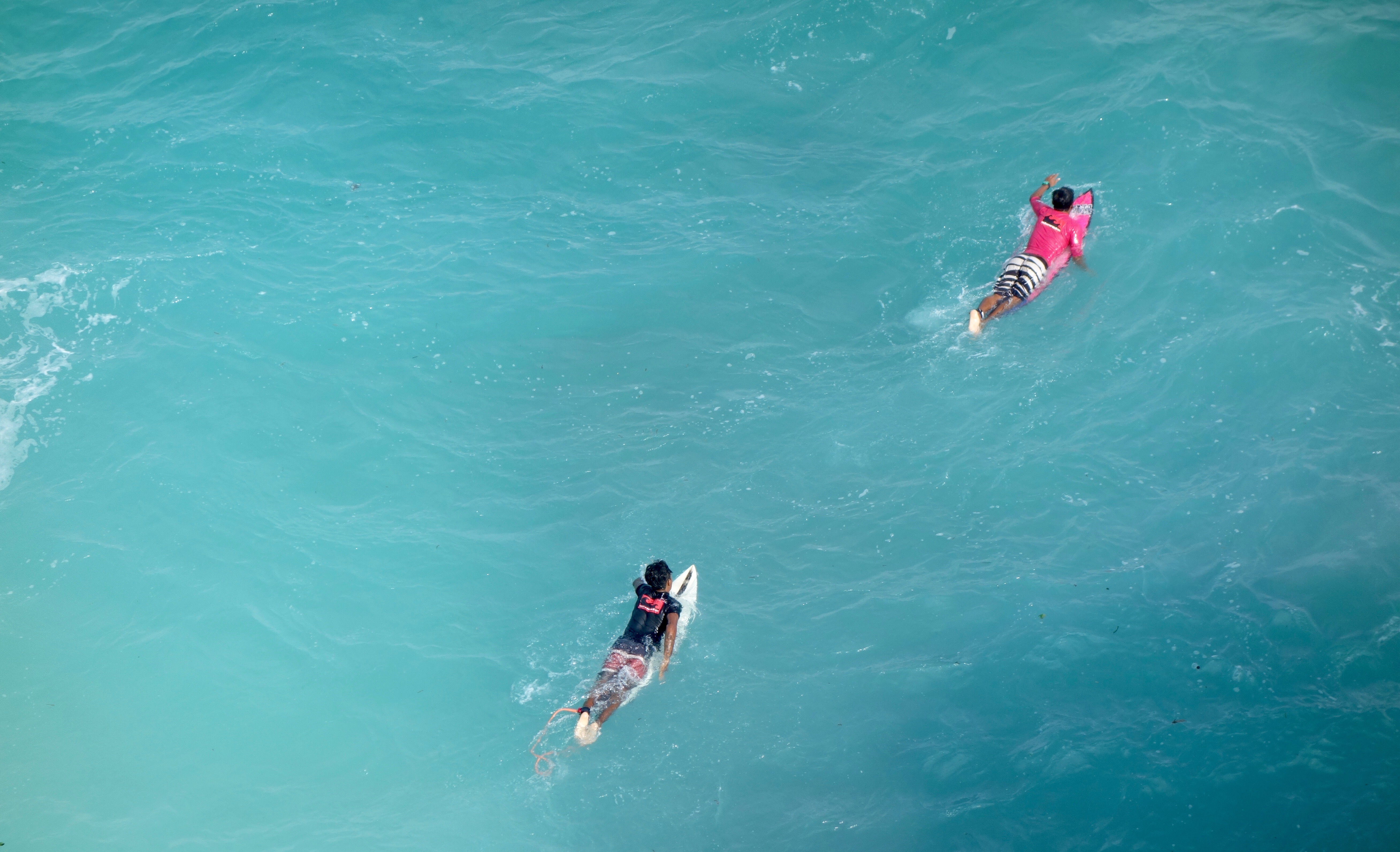 Paddling out to the breaks at Uluwatu 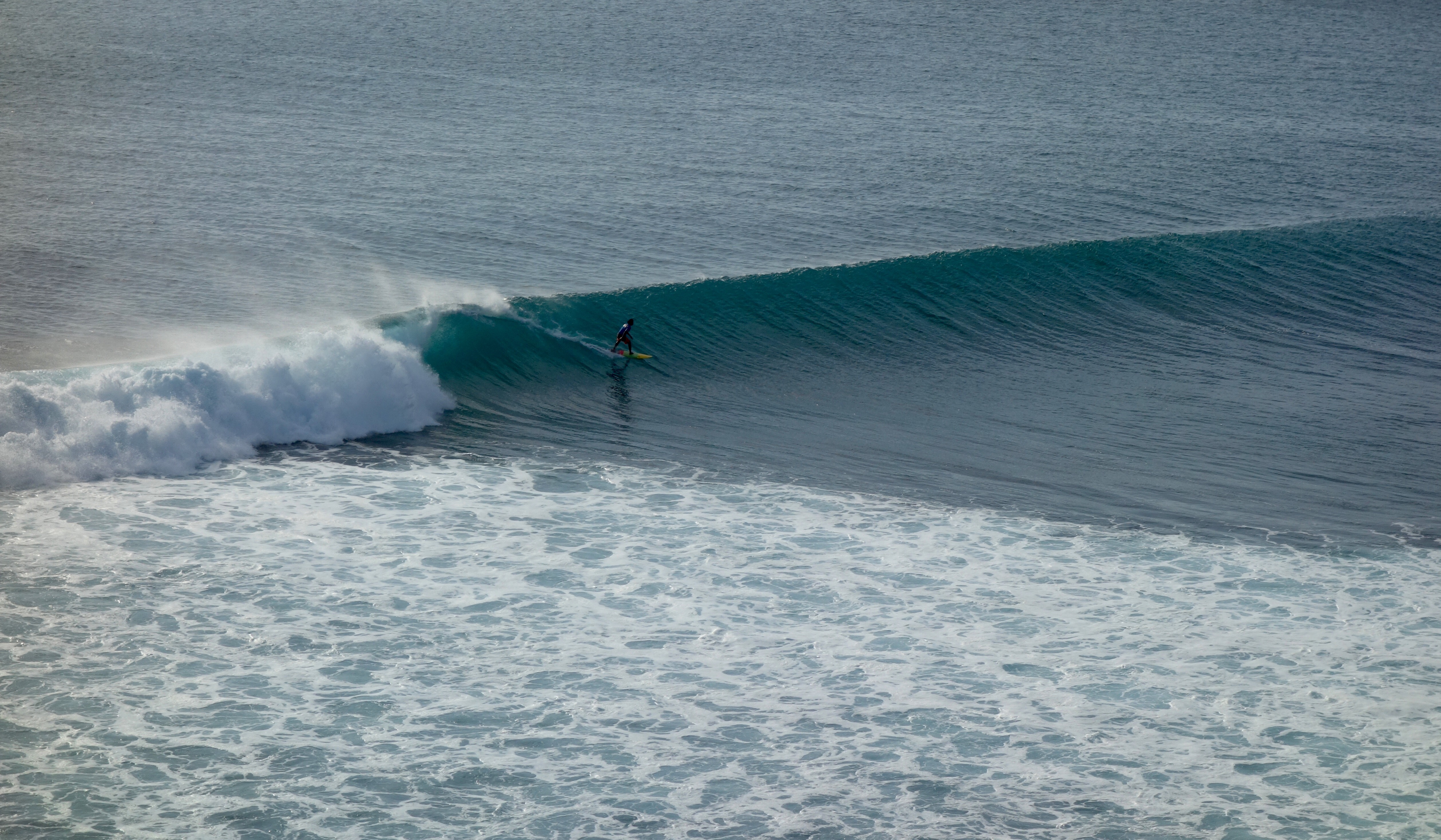 Riding a wave at Uluwatu

Uluwatu had seen some surfers in the 1960s but started drawing more in the early 1970s after the classic surfing film “Morning of the Earth”—filmed in part in Uluwatu—was released. At that time, there were no roads to take you to the surf spots, and the surfers sometimes had difficulty reaching them. People like Gerry Lopez and Wayne Lynch hired locals to carry their boards for them. Back then, they said, it was a novelty, and everyone wanted to be a part of it. Today, there are paved roads and stone steps that lead to the shores of the surfing spots. Homestays and warungs line the main road, along with more expensive hotels and lodges. Petrol signs are made from surfboards. On the streets you hear accents from around the world—Australian, American, Brazilian, Italian, British and more. Local women sell bracelets and sarongs along the beaches, sometimes begging you to buy something to give them “good luck” that day.  The tourism has boosted the economy, but the rapid development has also come at a cost to the environment and, some would say, to the local community.
Times have clearly changed since the 1970s and, as evidenced by some large hotels under construction, they will continue to change. What are the constants? The massive limestone cliffs; the Uluwatu Temple perched on the edge of a cliff overlooking the Indian Ocean; the aqua waters that slap and splash against the rocks creating white foam and then settling to a blue so clear that you can see the round rocks on the ocean floor; the Hindu culture that is pervasive in Bali, including the colorful offerings of rice, flowers and incense that are laid out daily, mostly by women, around homes, businesses and on the rocks and steps near the beaches; the lush green trees and the brown cows on the land along the back roads; and, of course, the waves. They just keep coming. 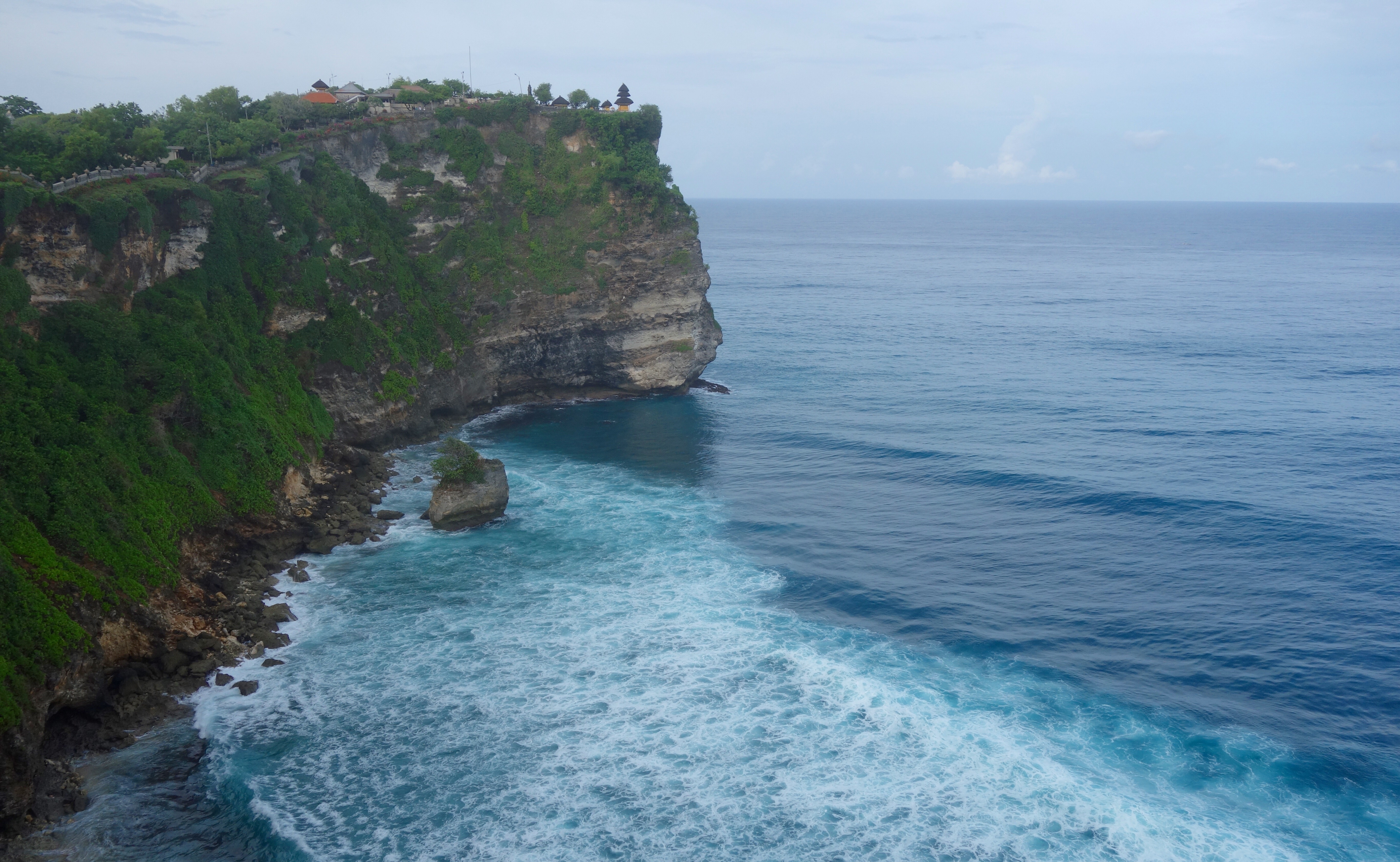 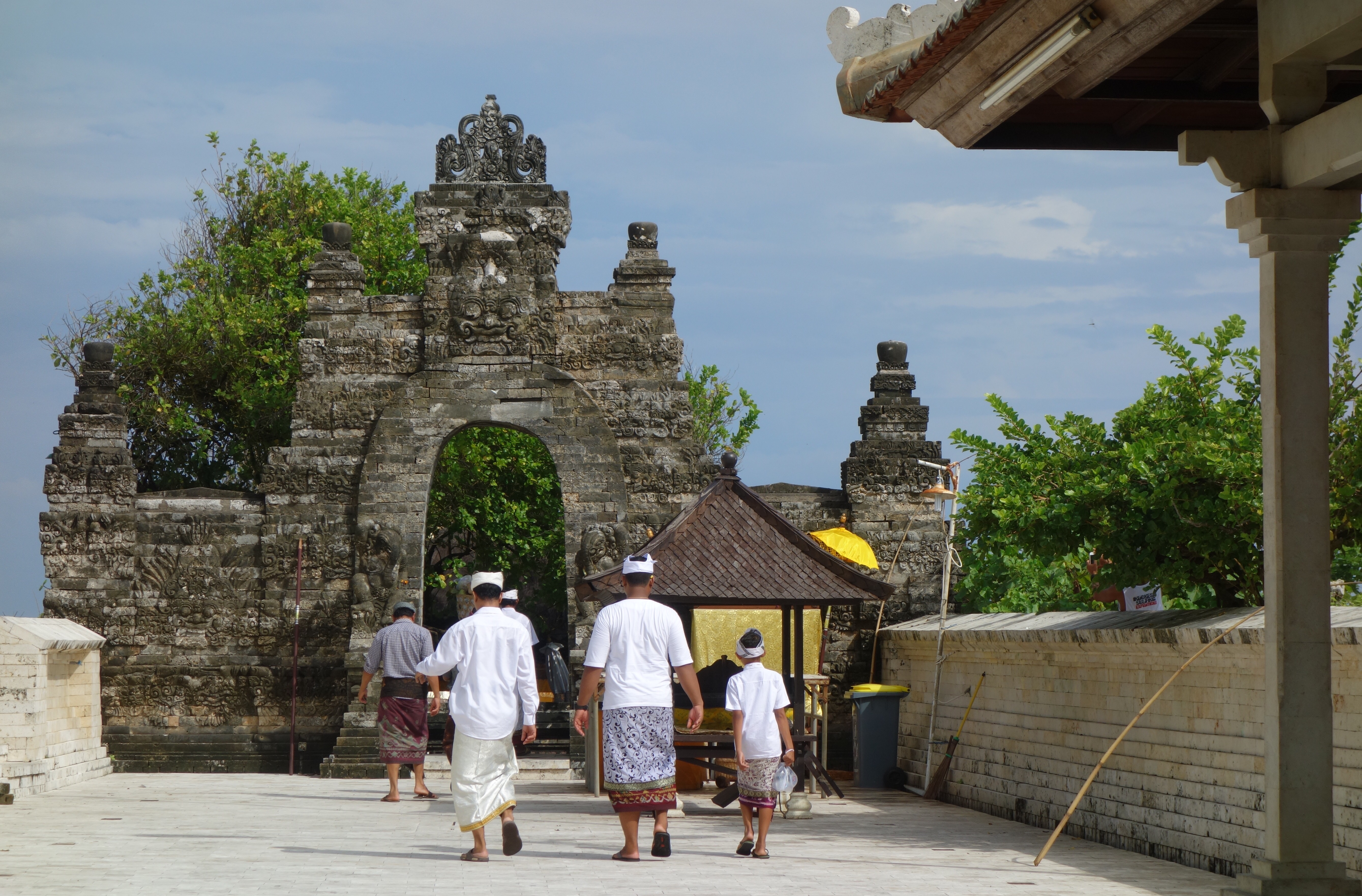 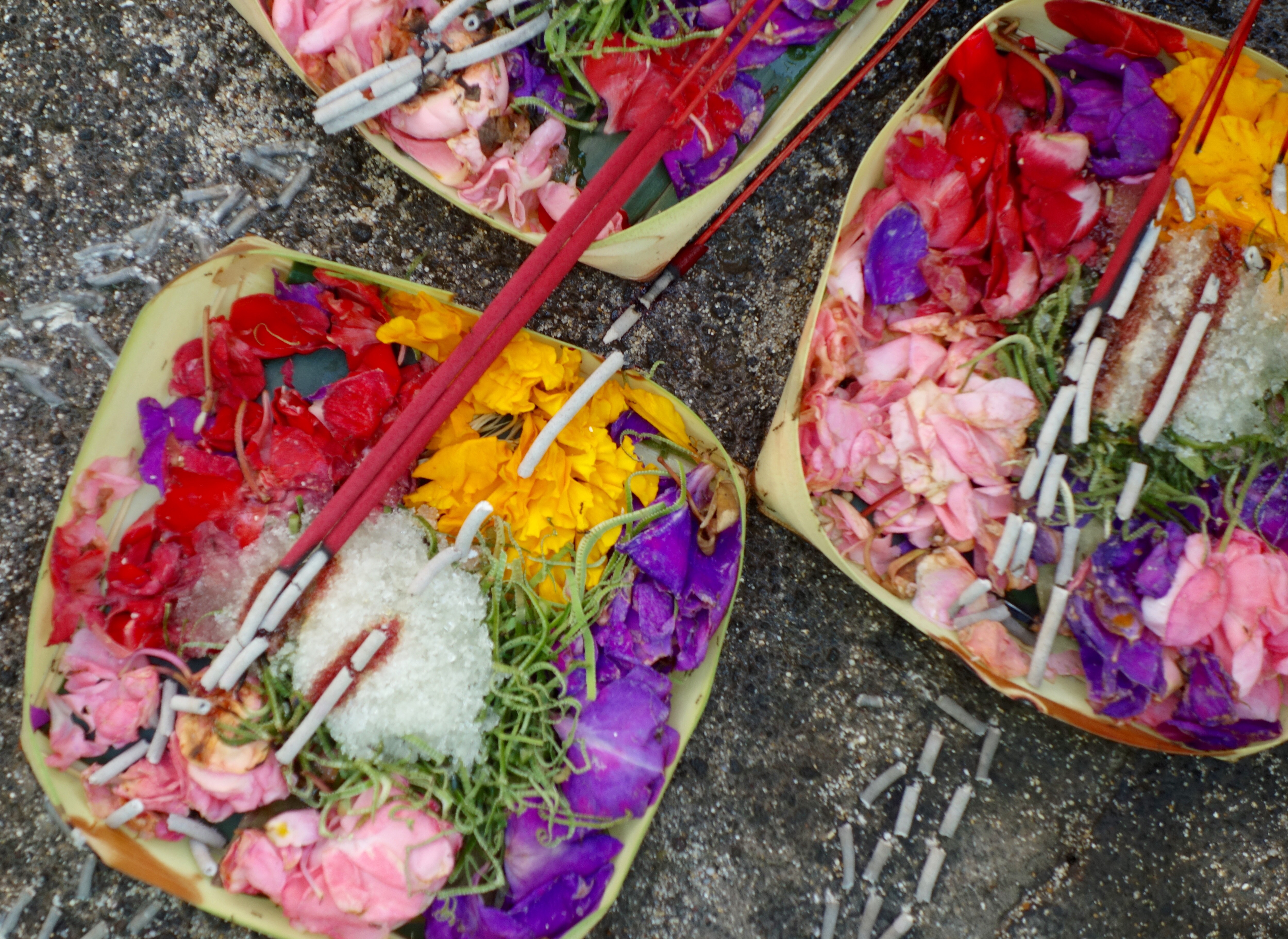 Hindu offerings left on rocks at the Uluwatu beach/cave area 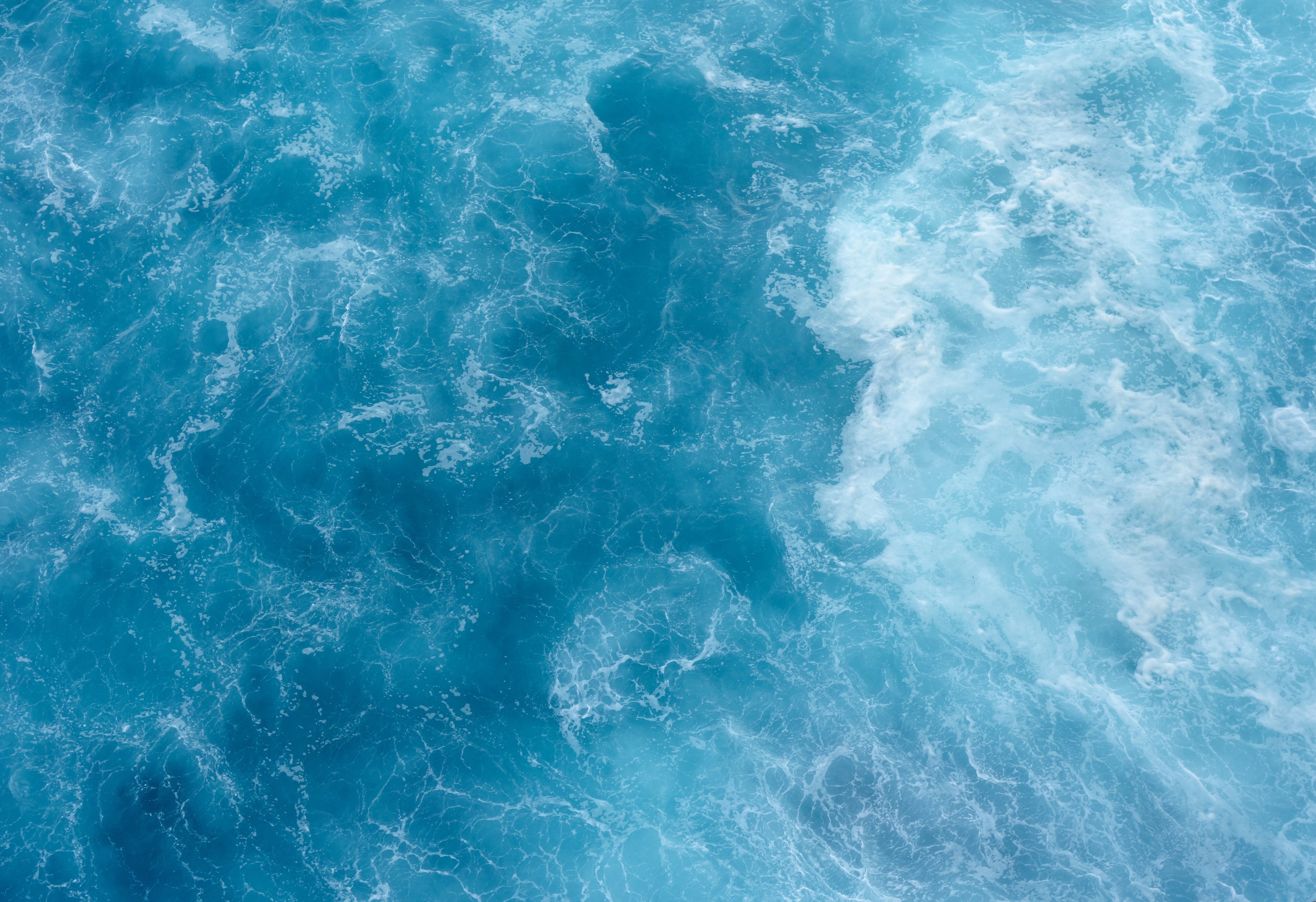 If you want to learn more about the early days of Uluwatu, as well as the impact of tourism on the community and the environment, these may be helpful:

Best Non-Surfing Experience in Uluwatu: Kimi Werner is a freediver/spearfisher/artist/chef from Hawaii. As part of the fundraiser at Drifter, she gave a presentation in which she shared about a recent experience free diving in the Arctic and played a short film in which she touched on the importance of hunting her own food, humans’ role as one part of the ecosystem and seeing a great white shark one day while she was free diving. From her experience, she could see the shark was not looking at her as prey. Rather than panicking, she had the instinct to move toward the shark and spent an extraordinary moment swimming with it. As I listened to her tell the story, I had the visceral sensation of our shared connection with every living thing. It took my breath away. You can watch the video, called “Variables,” on YouTube. 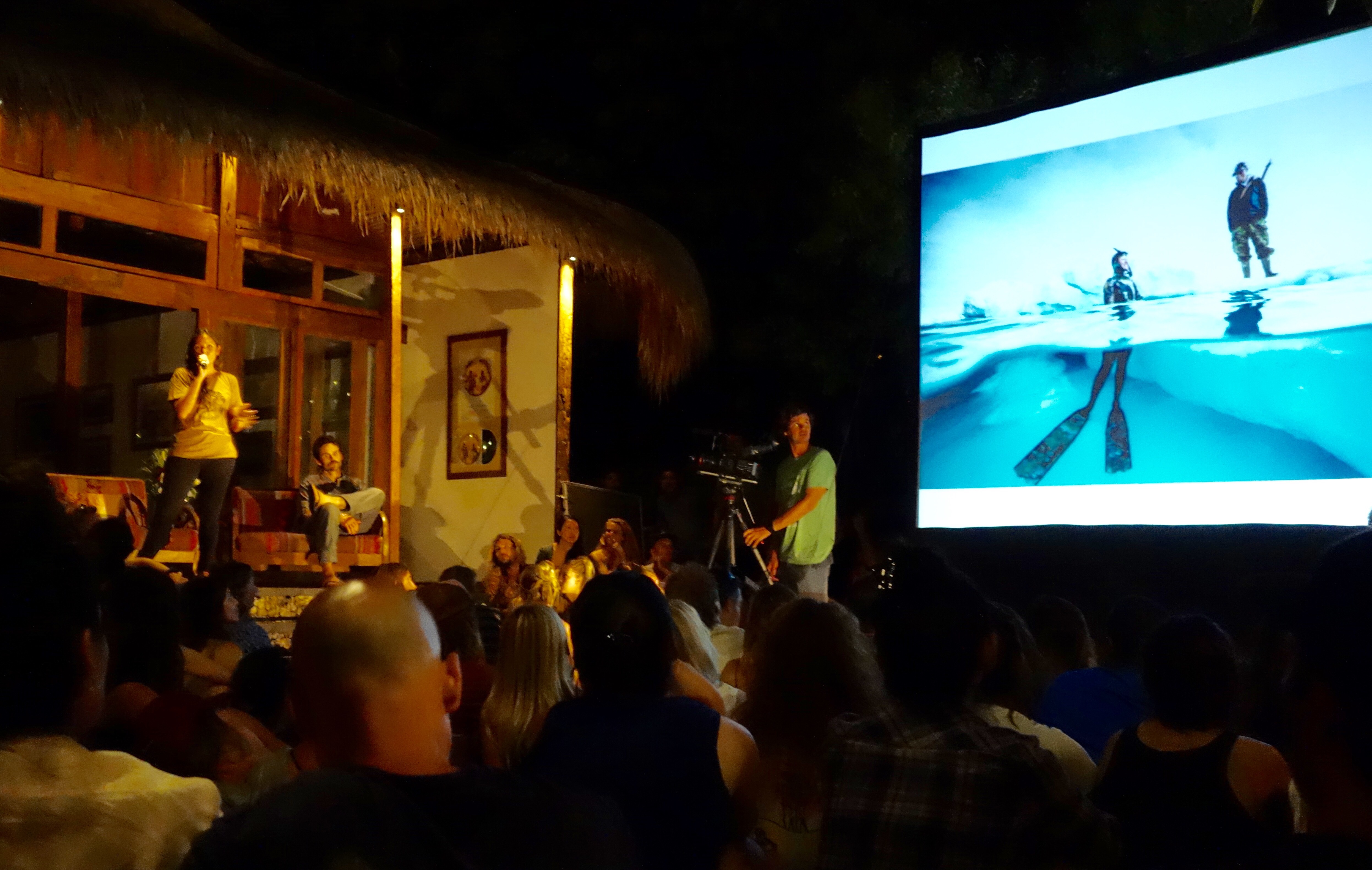 Kimi Werner speaking at Drifter, with a photo of her in the Arctic on the screen

Best Spot for Watching Surfing: I visited Uluwatu, Bingin, Padang Padang, Green Bowl and Pandawa. For several reasons, Uluwatu gets my vote as the best place to watch surfing. One, you need to be an advanced surfer to ride the waves there, so you have the potential to see some of the more talented surfers. Two, the warungs are built into the cliffside and face the ocean, giving you amphitheater-style seating with expansive views. And, three, the long and consistent waves give you a chance to watch some beautiful and lengthy rides. 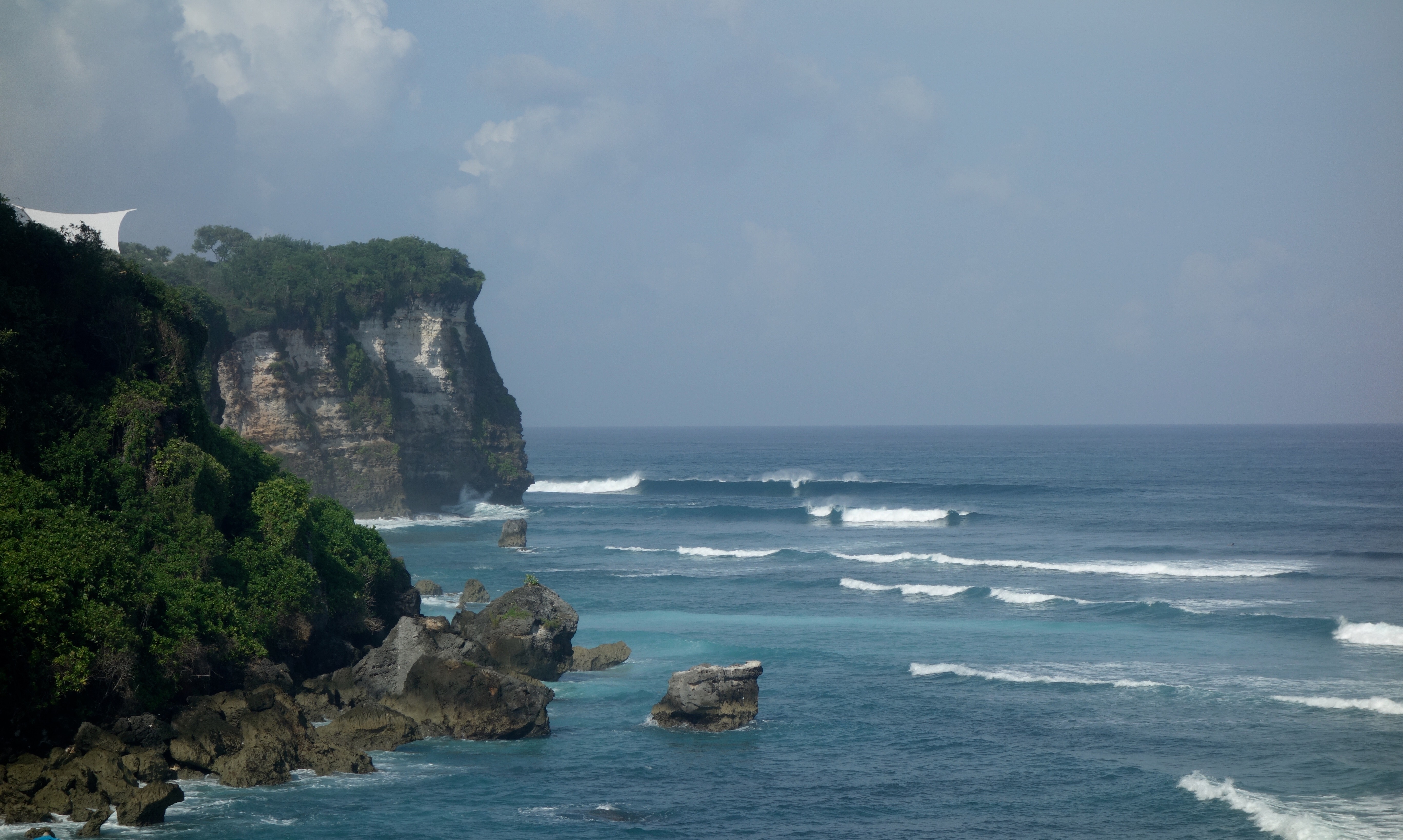 A view of Uluwatu from a warung on the cliffs 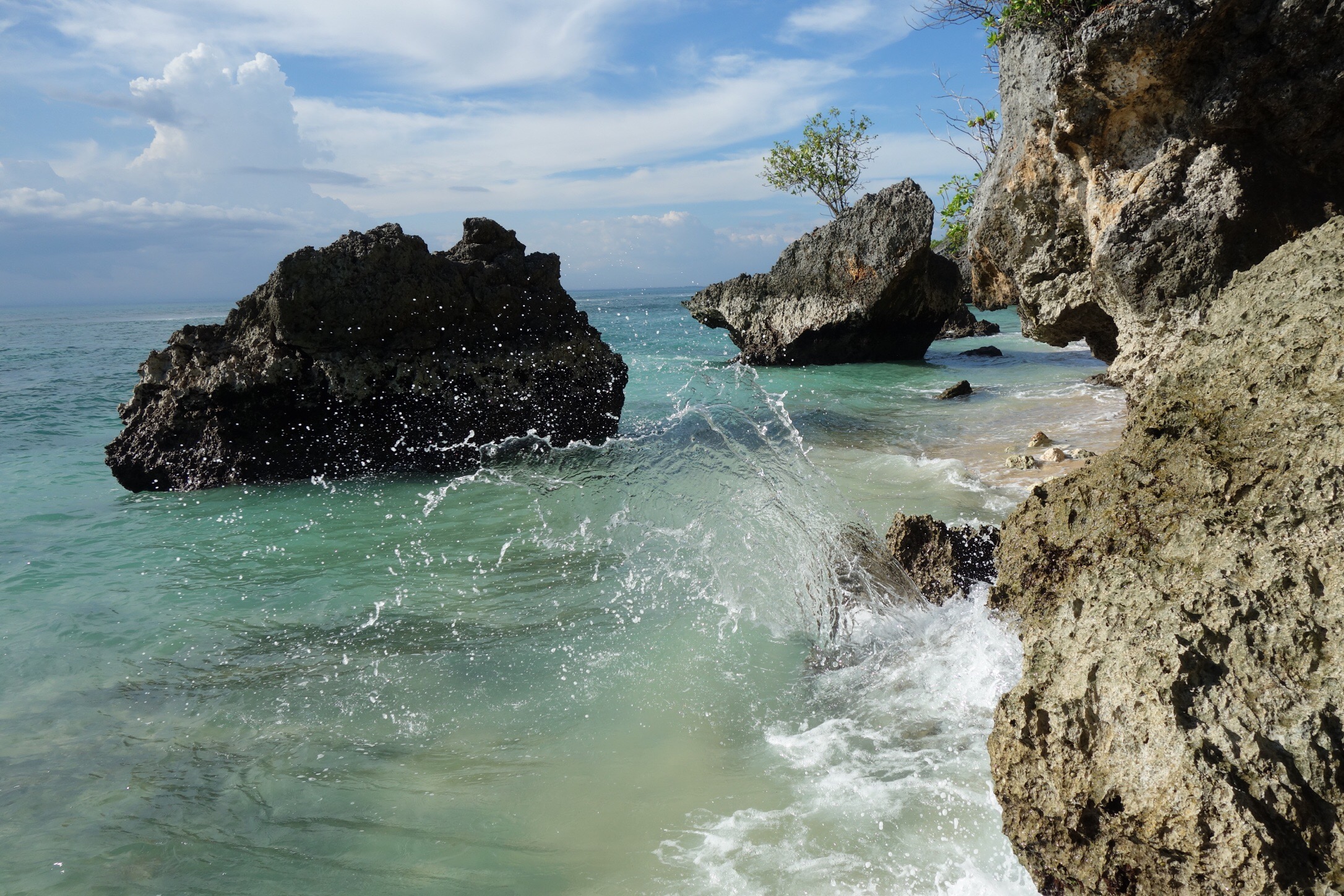 Best Overall Beach in the Uluwatu Area: Bingin Beach is located down a long staircase that leads to a more quiet and peaceful area than Uluwatu. It also has warungs where you can get food or drinks and watch surfers who are riding waves closer to the shore than at Uluwatu. If you just want to relax, you have the option of sunbathing on the beach or swimming in the water. Yes, you can swim in a small section of water at Uluwatu, but I found the currents there very strong and not the best for a leisurely time in the ocean. That said, the rocks at the shoreline of Bingin—and many beaches in the area—are a drawback. It will help if you have water shoes. 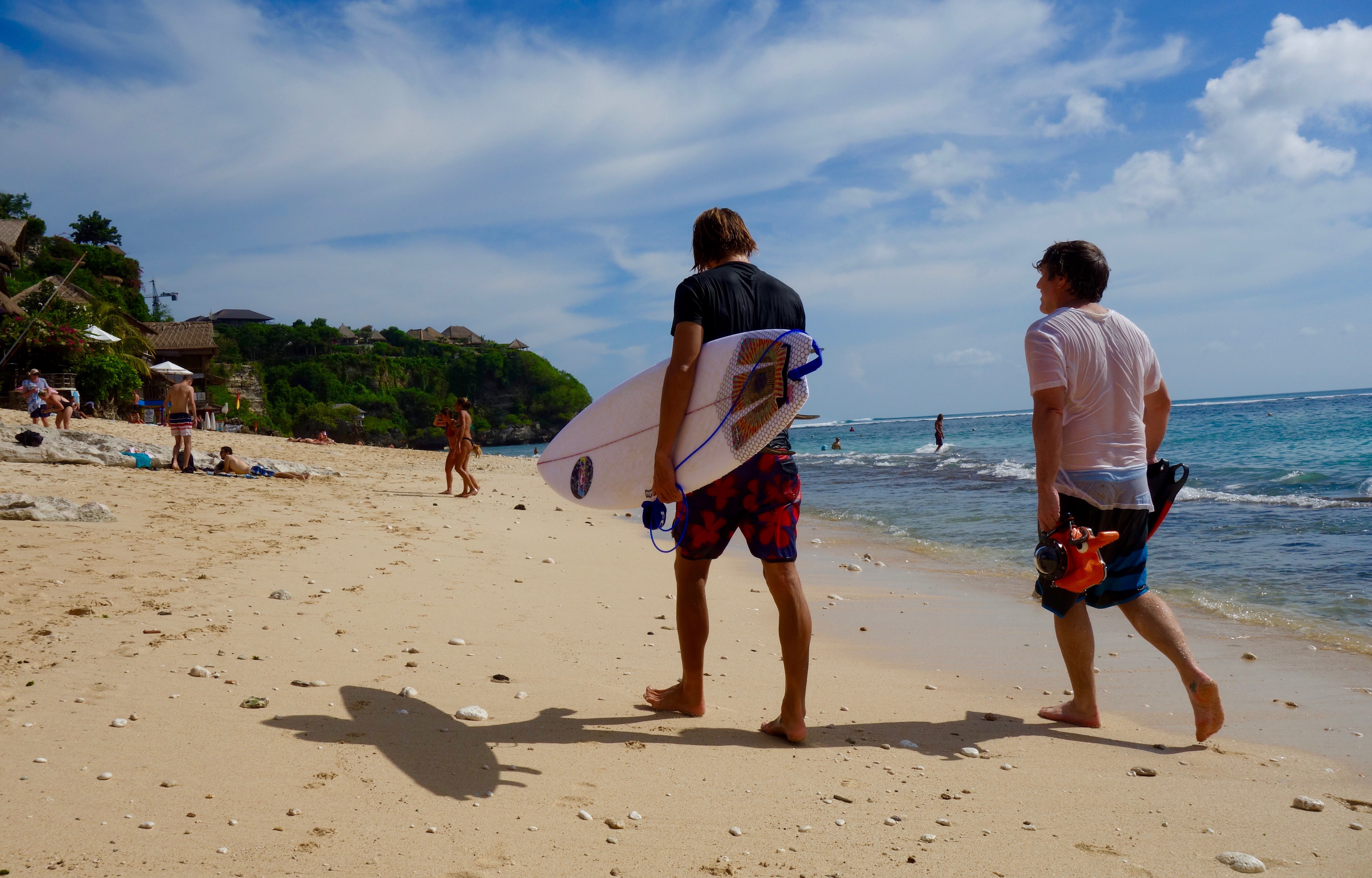 A surfer leaving the waters at Bingin 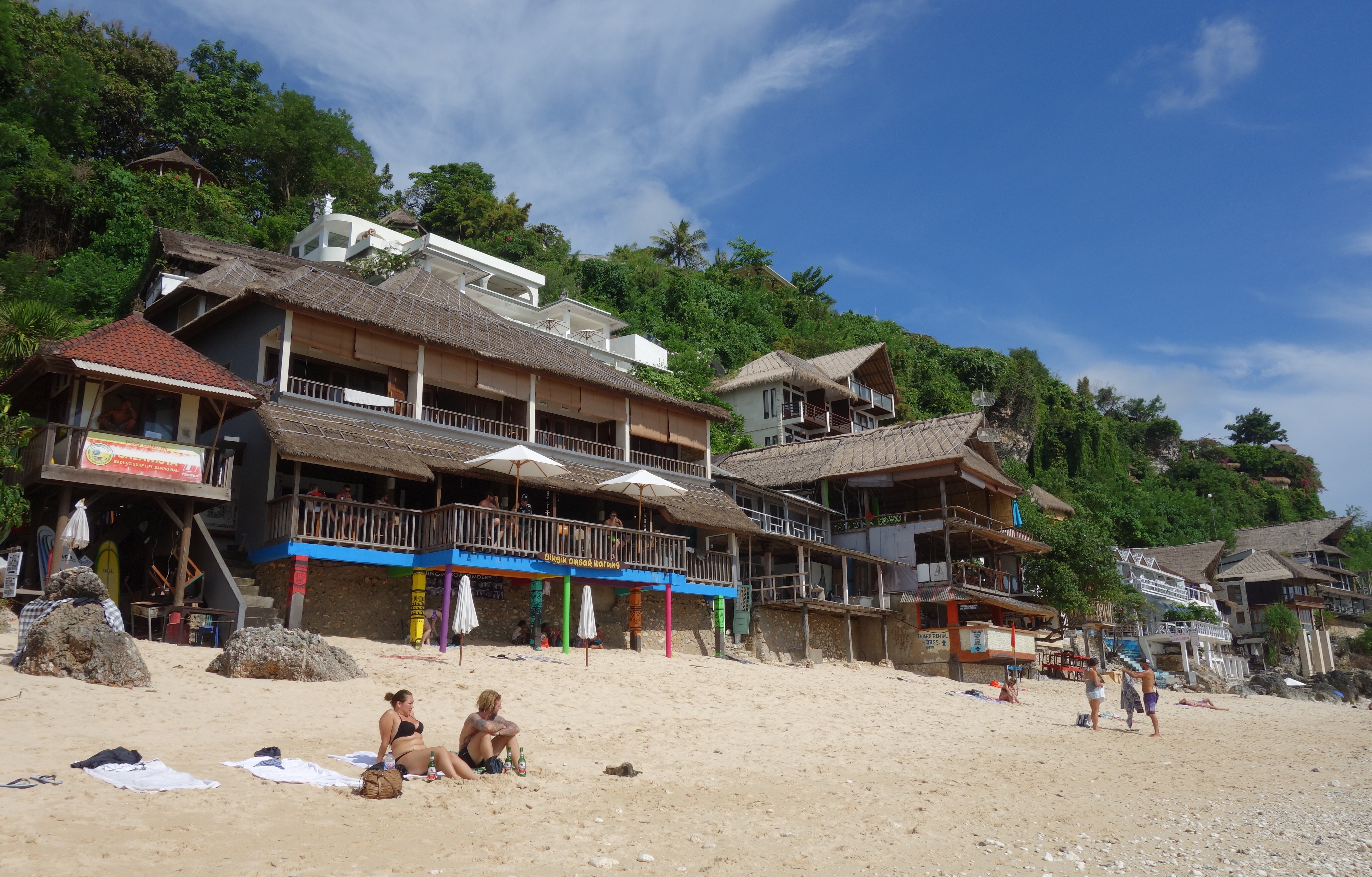 The warungs on the beach at Bingin

Where I Stayed: I slept four nights at 3D Homestay on Jalan Labuan Sait. I had originally booked the cheapest private room with a fan, but when I arrived the room was in bad shape with significant mold, damp sheets and a squishy mattress. I decided to upgrade to another room that was recently remodeled and had air conditioning. The staff said there are some cheaper fan rooms that have been remodeled more recently than the one they had available for me. Surfers often rent those rooms for long periods of a month or more, so the old, dirty one was my only option. If you want a fan room, you may want to specifically request one of the newer ones. The upgraded room that I changed to was comfortable and clean. The staff was friendly. The homestay also had a nice pool and a good warung for dinner.

I met my motorbike driver as I was walking the main road one afternoon. Instead, you may want to ask your homestay for a recommendation. My driver had a tendency to look everywhere but in front of him as he drove, leaving me to call out to him, “The road! The road!” as we flew along. “It’s okay,” he would say with a smile as he gazed off to the side again. He later lost the key to the motorbike and called in a friend to finish the day with me. In the end, I considered the lost key a blessing in disguise. 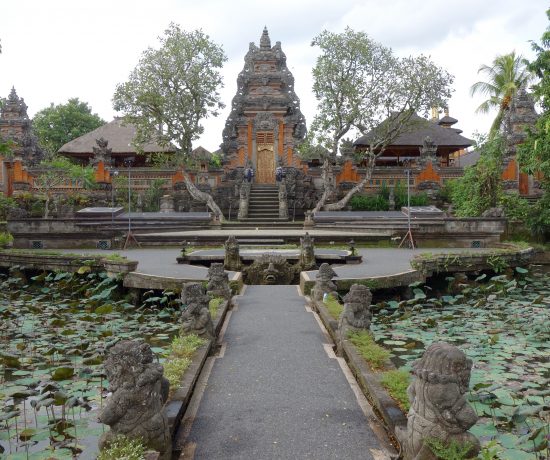 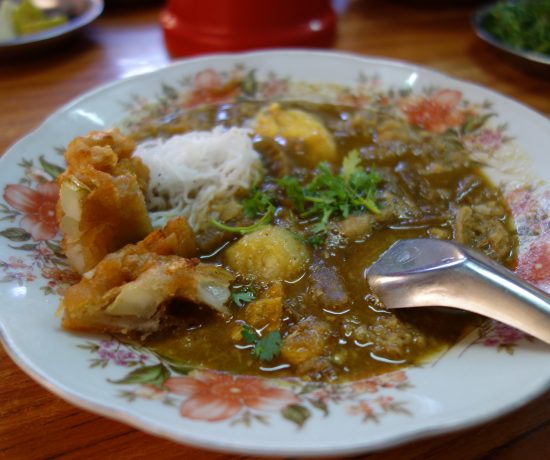 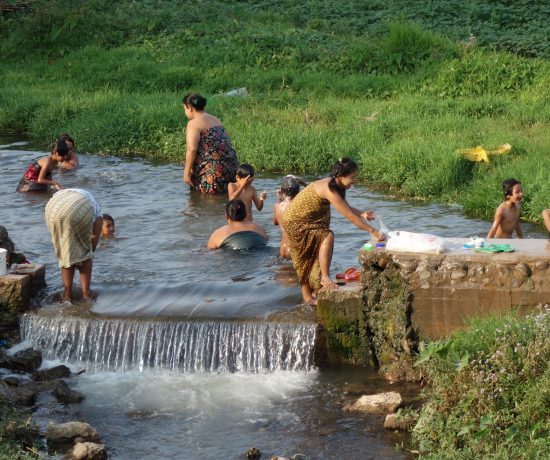