I stayed in Zambia only about five days as part of my travel toward East Africa. Still, it was the start of a lot of interactions with local people that I am probably still absorbing.

I arrived in Livingstone on a Friday as the tail end of my Botswana safari with Bushways and then stayed on for three nights to explore and relax. I got soaked by the rainstorm-like spray at Victoria Falls on both the Zambia and Zimbabwe side (you can get a Kaza visa at the border that will allow you to go back and forth between Zim and Zam; I preferred the Zim side), took photos with several Africans who surprised me and my safari friends by asking us to pose with them, ate goat stew at the Zambezi Cafe and even sat in on a small Christian church service on a Sunday morning that happened to be going on next to the gift shop at the Livingstone Museum. 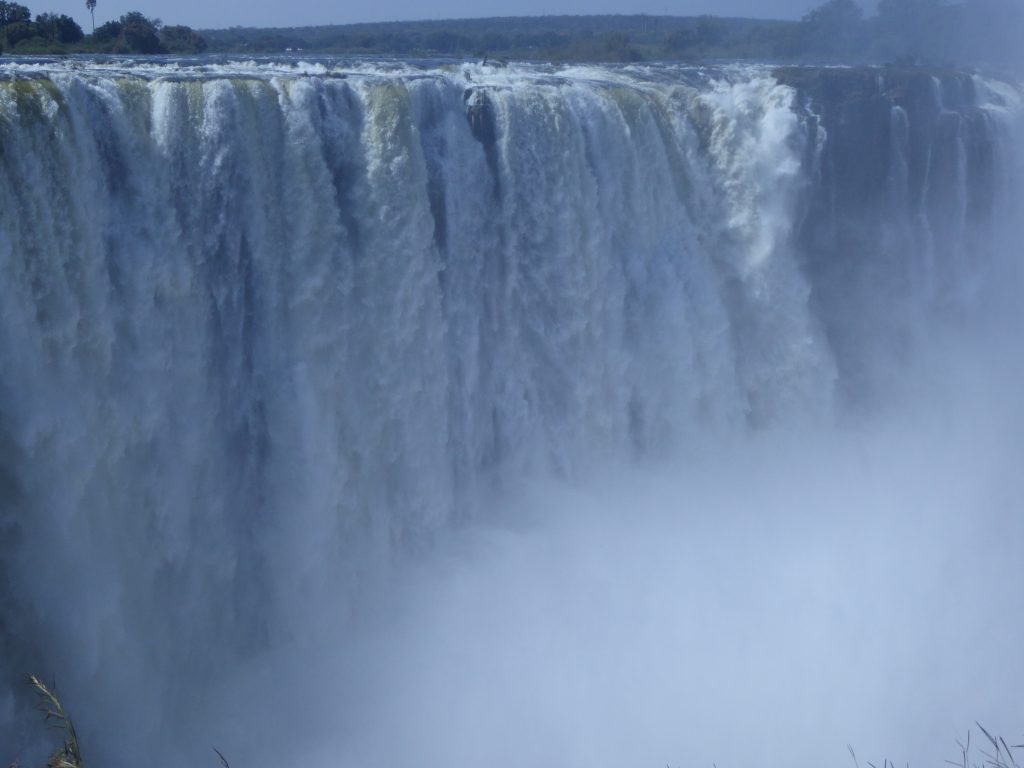 Victoria Falls from the Zimbabwe side. In spots, the spray was so big you could not see the Falls behind it. 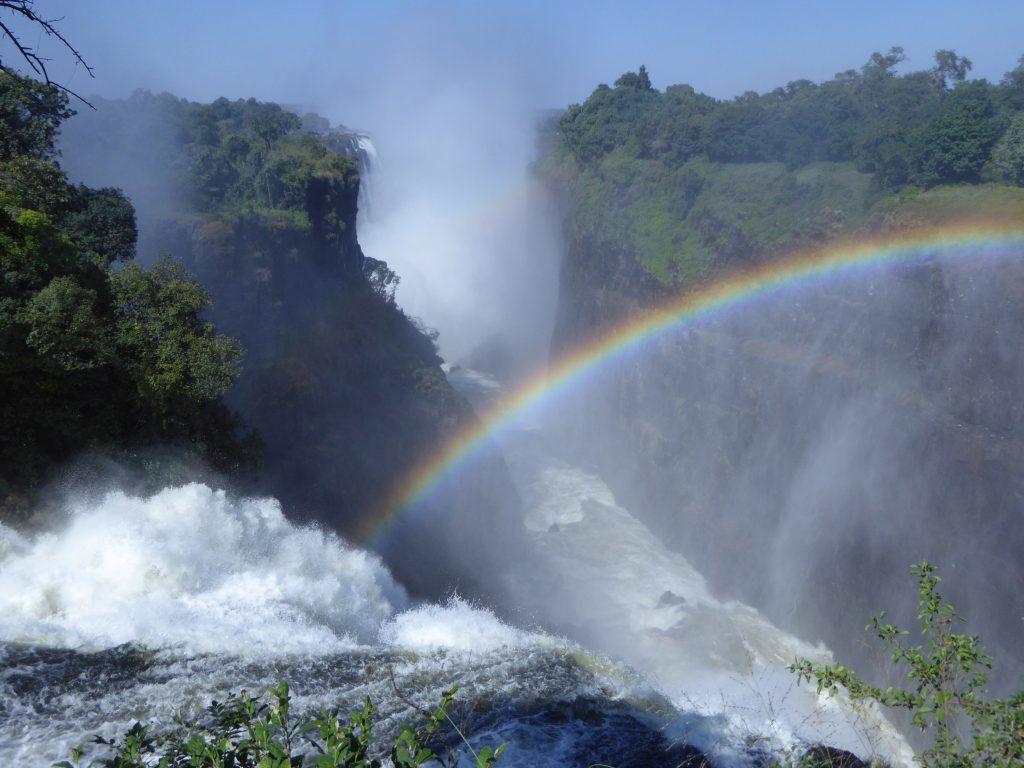 Double-rainbow! (second one can only be seen here very slightly behind the first) Again from the Zim side 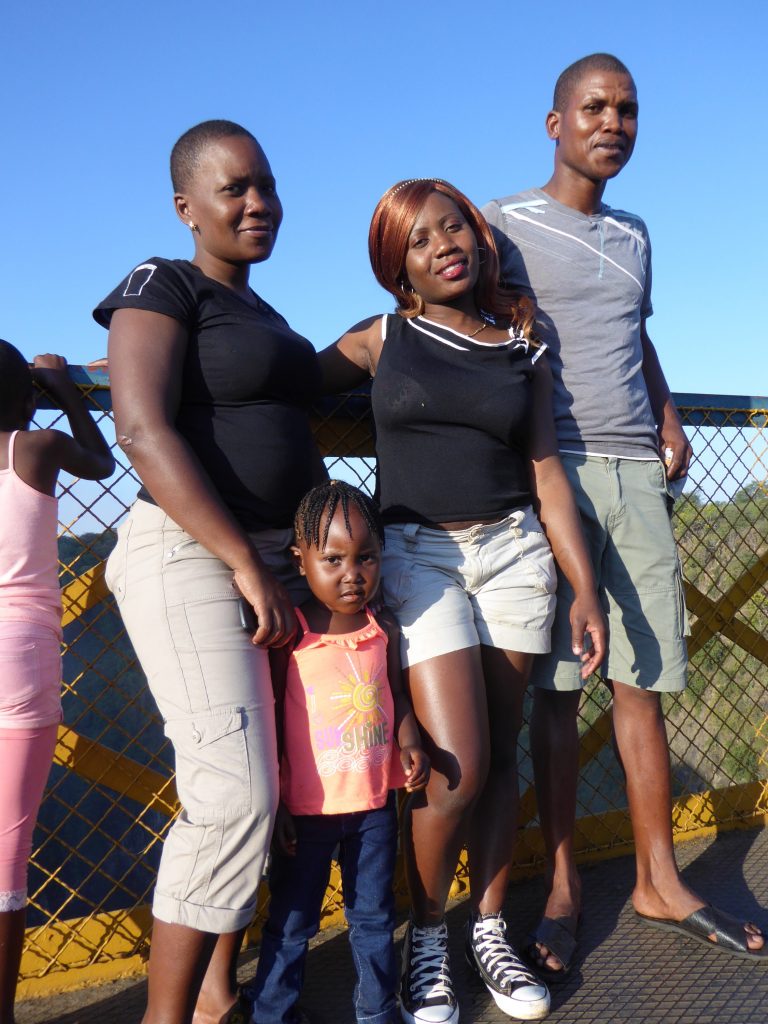 A man with his two wives at Victoria Falls. From what I have heard, this practice is not as common now as in the past, but there are still some who follow the “traditional” ways 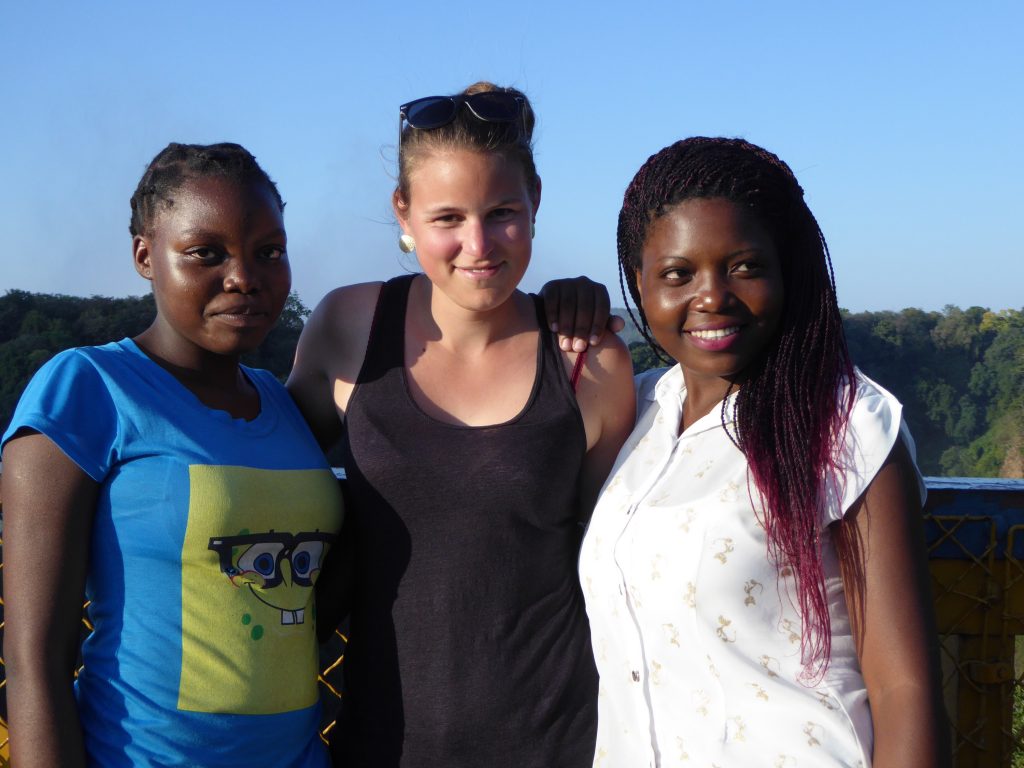 Two of the women who wanted to take photos with us, along with a Swiss friend from my Botswana safari

Early Monday morning, I took a bus to Lusaka. I sat with a woman named Marvis and chatted with her for about an hour before we both drifted off to sleep. She was on her way to Ndola, in the copper belt, for work. She was the seventh of 10 children in her family and was a teacher of blind and deaf children. Her dad had businesses selling alcohol and maizemeal, a staple in every country I’ve visited in Africa so far. He had also worked in the Zambian parliament in some capacity and had five wives and 37 children overall. Her mother and father both died when she was in grade 9, and she was raised by her aunt after that. It was difficult, she said, but her aunt gave them good values and all of them had done well, though one sibling still needed help because he was “mentally retarded.” She had one son herself and also raised her cousin’s daughter from the age of three after her cousin had died. She asked me about my travels, and I explained what I was doing, how I had saved for the travels for about five years, working toward it bit by bit. She joked good-naturedly about how a Zambian would have to save 20 years to do what I was doing and still might not have the money. True. Somehow, we had an easy rapport very quickly in our conversation. I told her this was one of the best things I had ever done for myself and started to get teary. “Excuse me,” I said. “You just feel it strongly,” she said. “Yes,” I agreed. “What you are doing–traveling this way–,” she said, “you are an African in your heart.” She added more than once, “You need to come back to Zambia.” She told me about her dream–to get a plot of land from the chief and build a school for kids with special needs. She said these kids are often mistreated at home and happiest when they’re with their friends. She wanted to have a boarding school for them where they could get the attention they needed. She then texted a friend–who worked as both an English teacher and a taxi driver–to pick us up at the crowded bus station and drop me at the Lusaka Backpackers where I was staying. She and I have stayed in touch, and she told me recently she talked to someone about buying the land she wants. It will take her a long time to pay for it. Bit by bit, she said. If anyone would like to help her toward this dream, let me know, and I will see how I can facilitate it. As she said, she has the passion–which I could hear as she talked about it–but not the adequate resources.

I stayed in Lusaka for two nights. I got my first haircut in Africa–thanks to the woman who chased me down to escort me to Samantha’s Hair Salon after an hour and a half of searching for it–and did a good tour (called the “Komboni Experience”) of the Garden Compound area to get at least some sense of how some of the poor live in Zambia, as well as some of the programs people have implemented to try to help the community, including the wonderful Ngwerere Library. 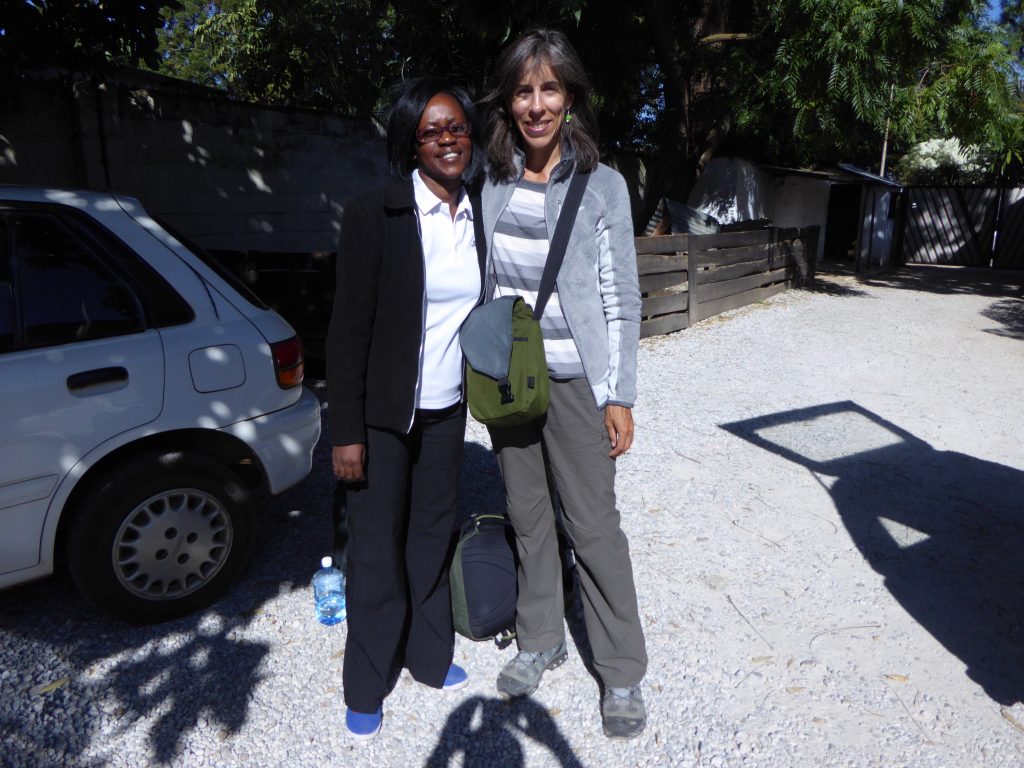 Me and Marvis post-bus trip, Lusaka 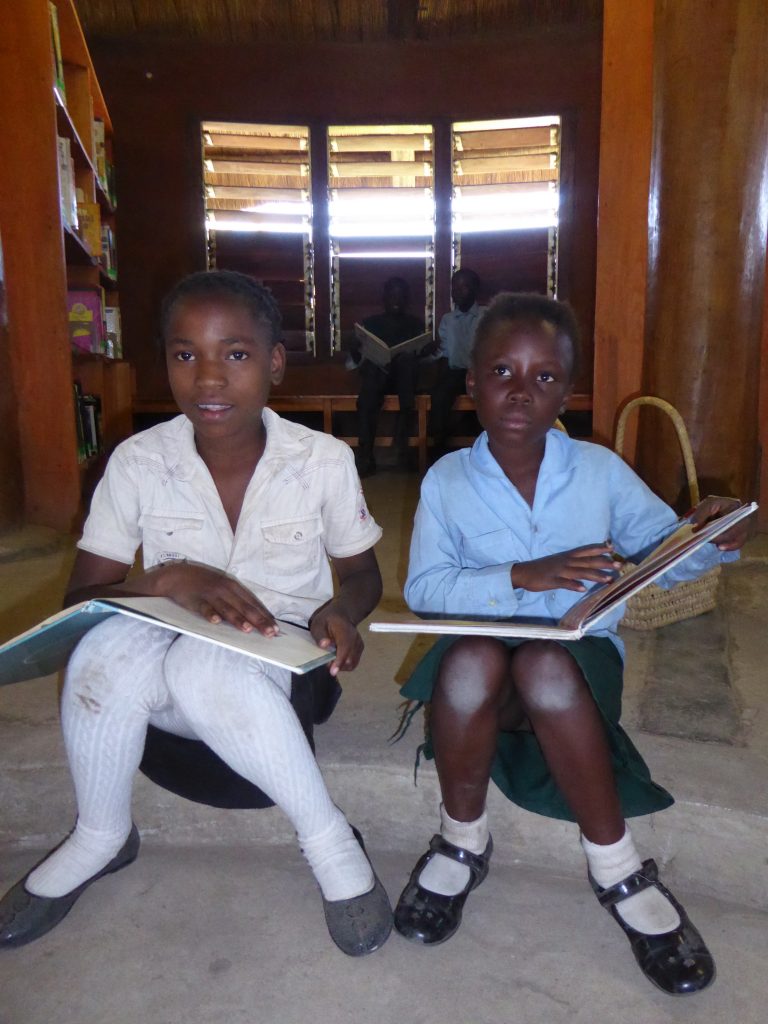 Kids reading at the Ngwerere Library 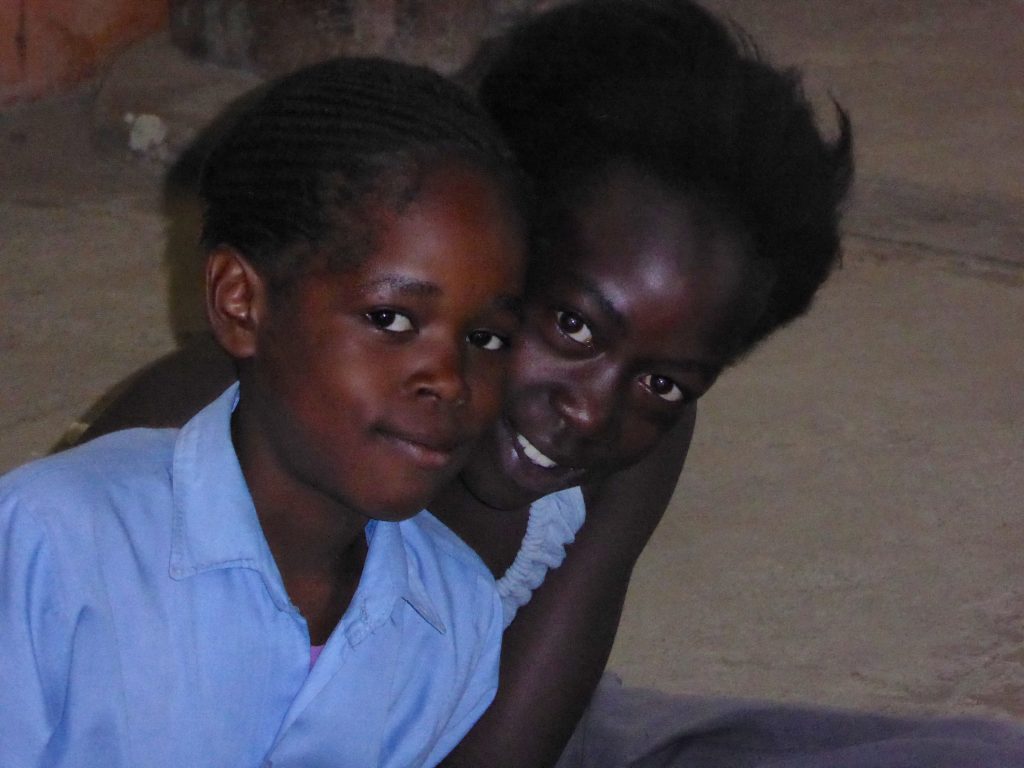 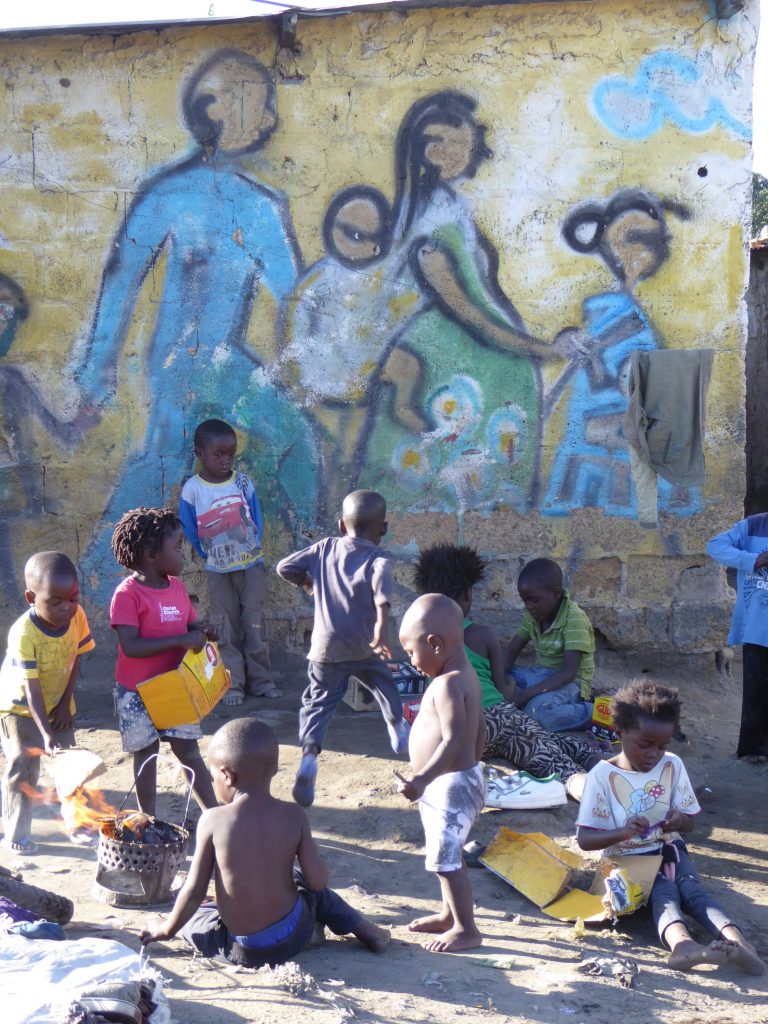 Above and below: Murals in the Garden Compound, Lusaka 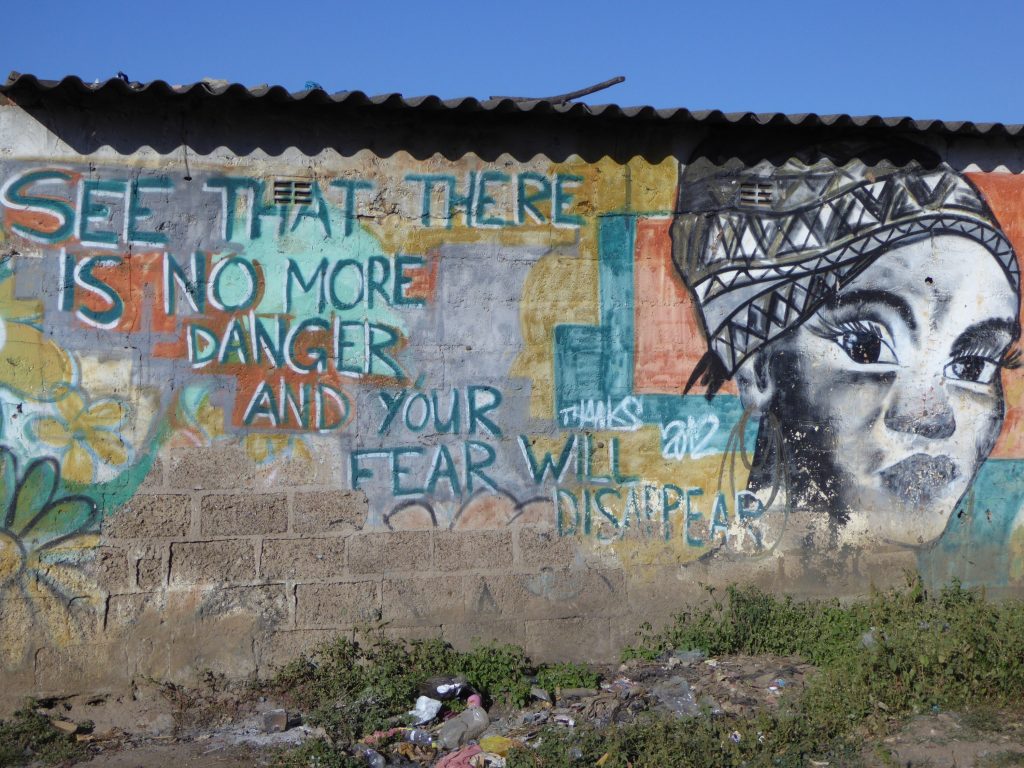 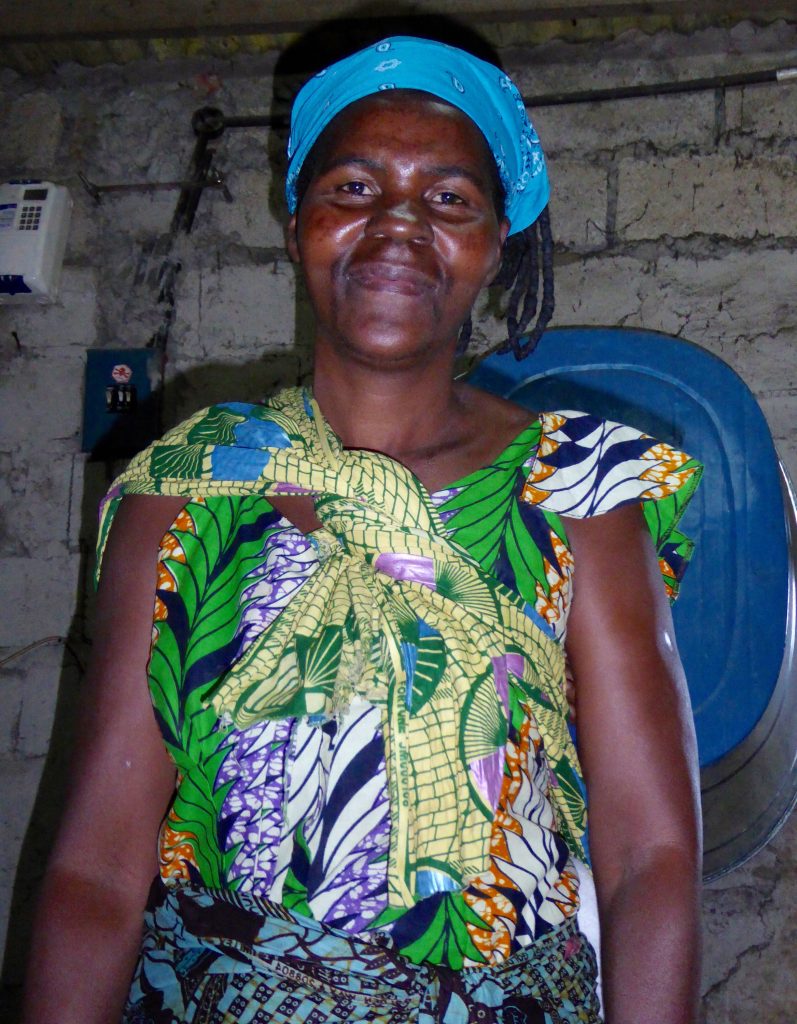 A woman in the Garden Compound who makes various items (bags, bedspreads, etc.) out of chitenge (the colorful African fabrics). She learned to do this through a Red Cross program that is sadly no longer happening because someone involved with it was apparently stealing the funding. 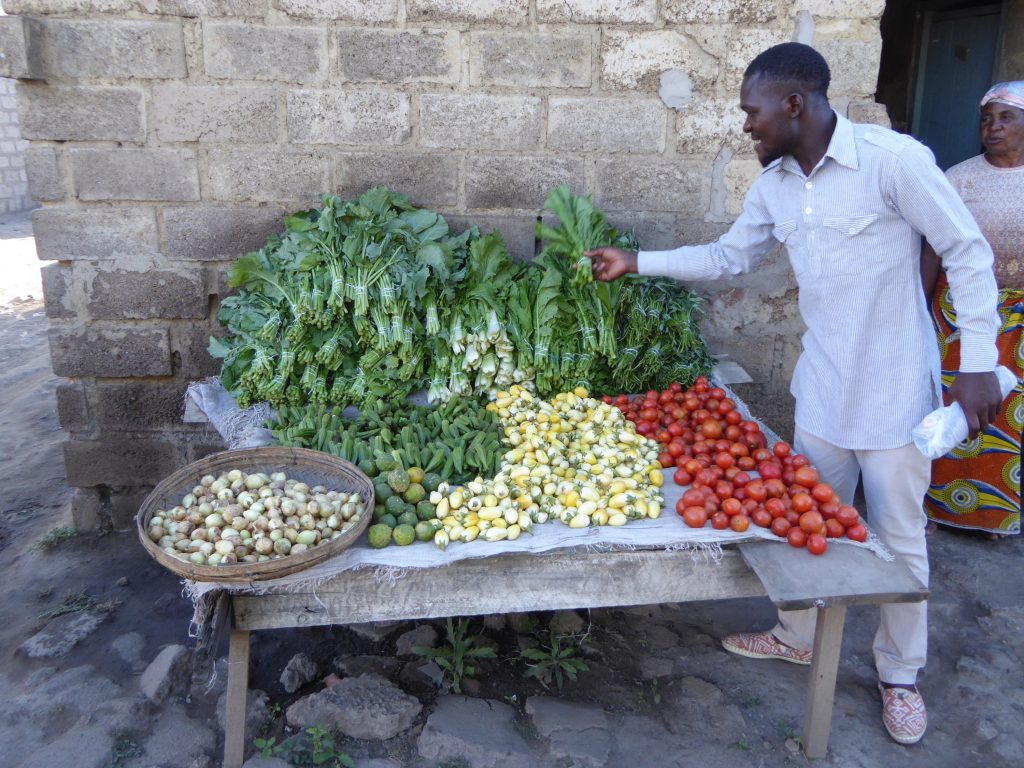 On Wednesday morning I was at the bus station by 4 a.m. to start my journey to Malawi. That bus ride was yet another notch up on the chaos level. We traveled for 13 hours, stopping to pee literally on the road at one point and getting snacks of samosas, oranges and hard-boiled eggs from vendors who held up the goods to the bus windows at our stops. They played African and American music videos loudly non-stop, and by the time we got to round two of the Britney Spears and Brandy videos, I was cooked mentally and physically. Tired, hot, sick of holding my heavy bag on my lap and feeling pinned in to my chair. At one stop immigration had come on to check everyone’s papers and apparently found a problem with one man’s papers. Many people on the bus tried to defend him as he argued with the immigration worker. He did stay on the bus through to Lilongwe, so I’m not sure why he kept yelling about it for the rest of the trip, but he did, once saying something along the lines of “I’ve got cows!” My seat companion and I couldn’t chat as easily. I didn’t speak his language–maybe Bemba or Nyanja–and I found it hard to understand his limited English because of his accent. A sample conversation between us: Me: “What is he yelling about?” Him: “I just don’t like to eat when I travel.” I did gather that he was on his way to Chitapa, near the border with Malawi, to see family and then would go to Mozambique. And, thankfully, he did connect me with two Malawi business women sitting in front of us who very deftly handled the money exchangers for me at the Malawi border, even making me a profit! Thank you, ladies! We finally rolled into Lilongwe around 7 p.m. We passed malls and car dealerships, not what I expected to see in one of the poorest countries in the world, though that turned out not to be the standard scenery in Malawi. The streets were crowded with walkers and bikers–a popular form of travel in both Zambia and Malawi–and we drove around one pothole that took up nearly half the road. I caught a taxi to Mabuya Camp, a backpackers place in Lilongwe, and happily retreated to my room to recharge my body for the next day’s journey to Nkhata Bay, on the shores of Lake Malawi. 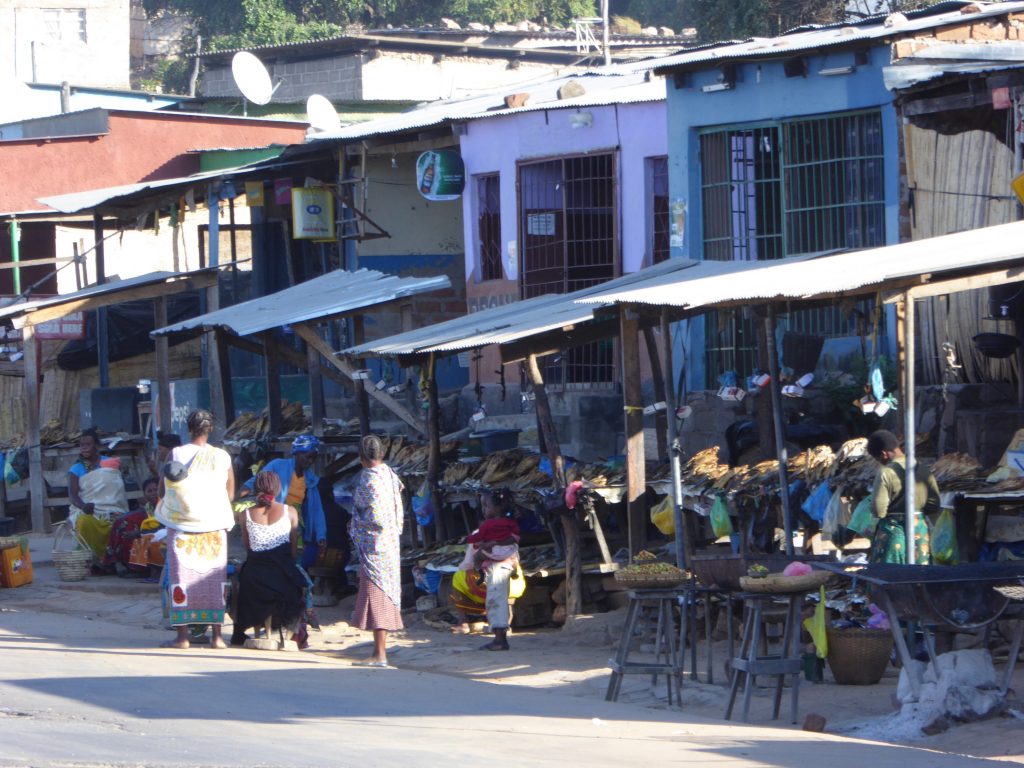 In Zambia, along the way toward Malawi 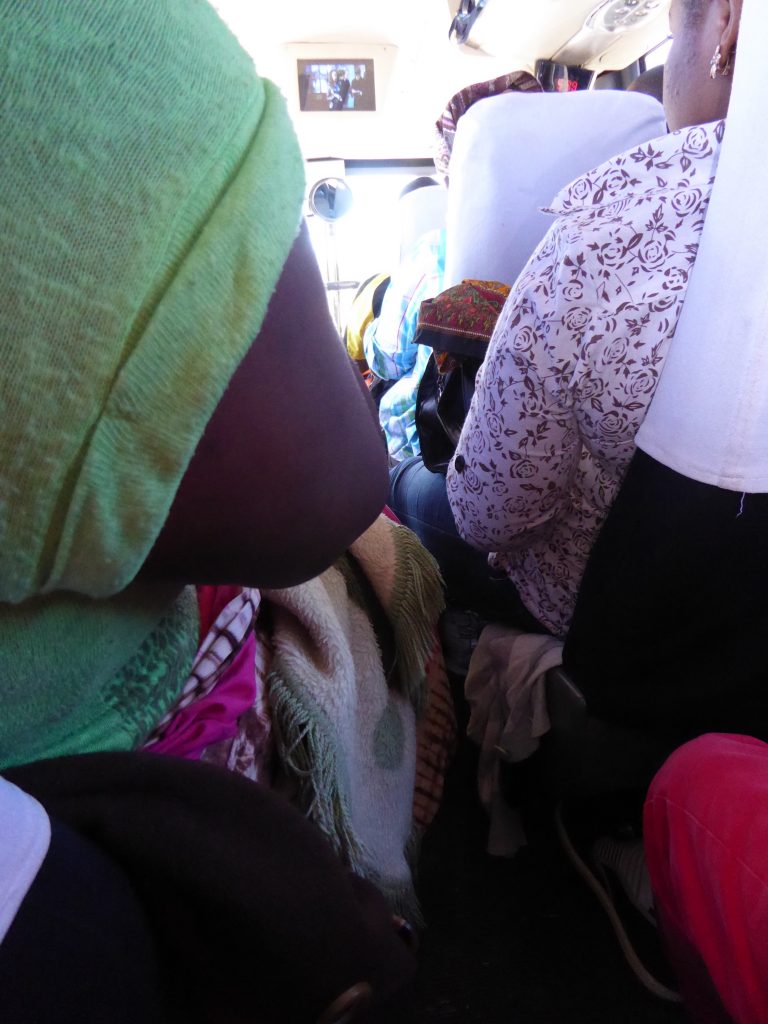 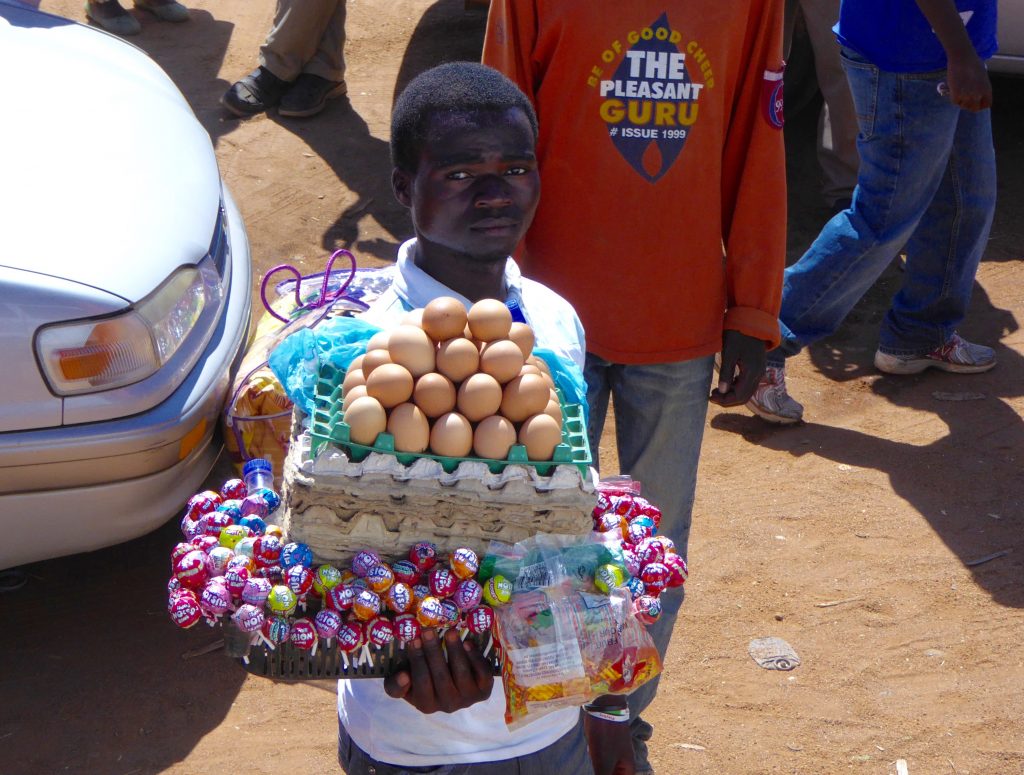 Selling goods at one of our stops 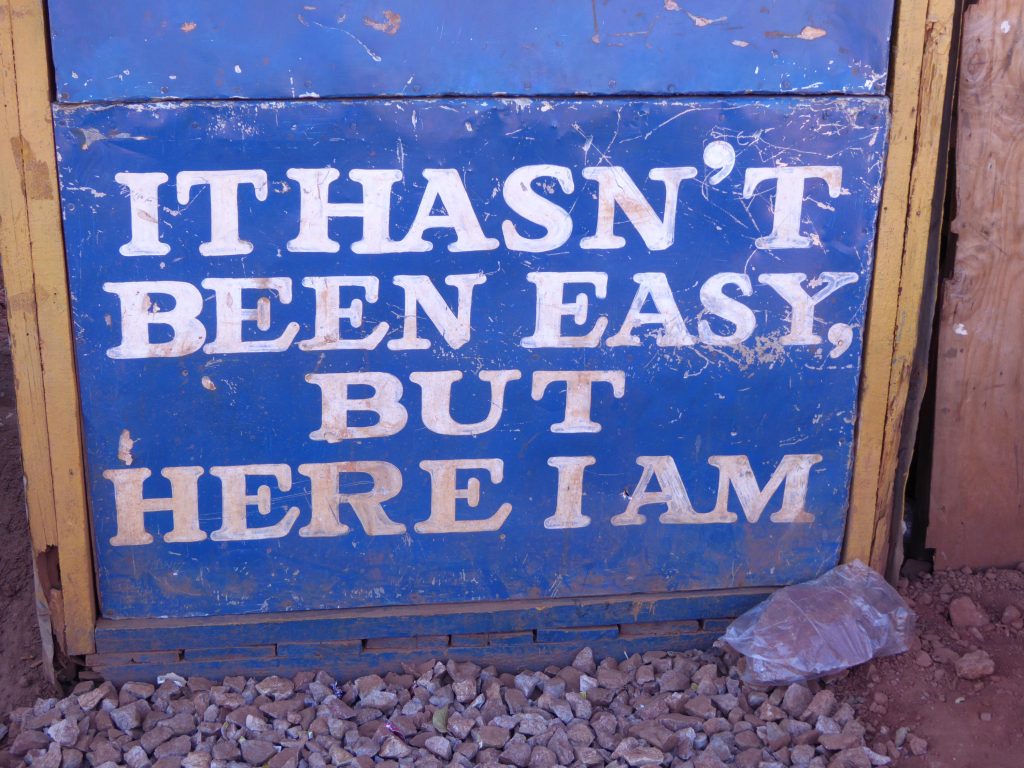 That sums it up 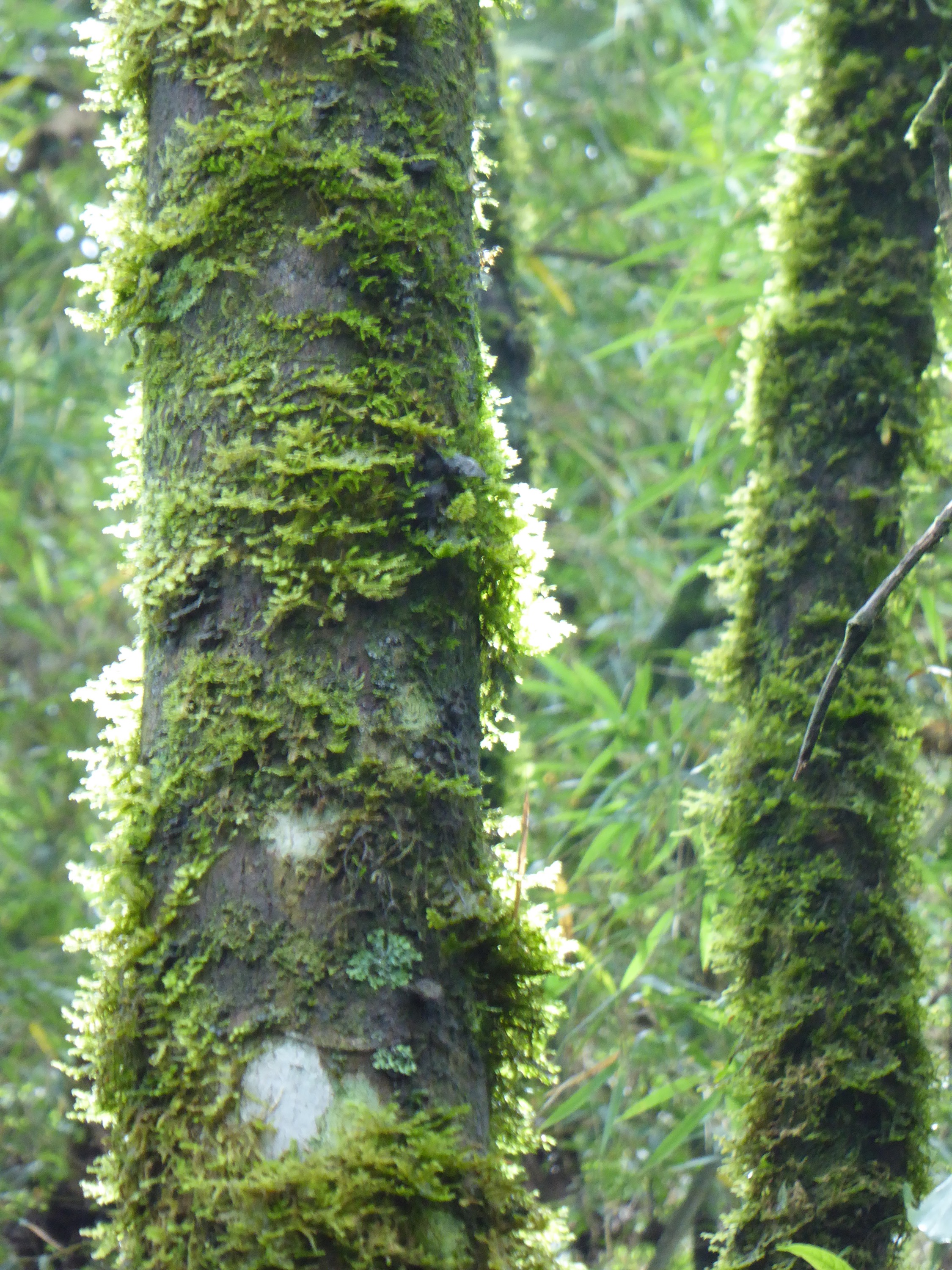 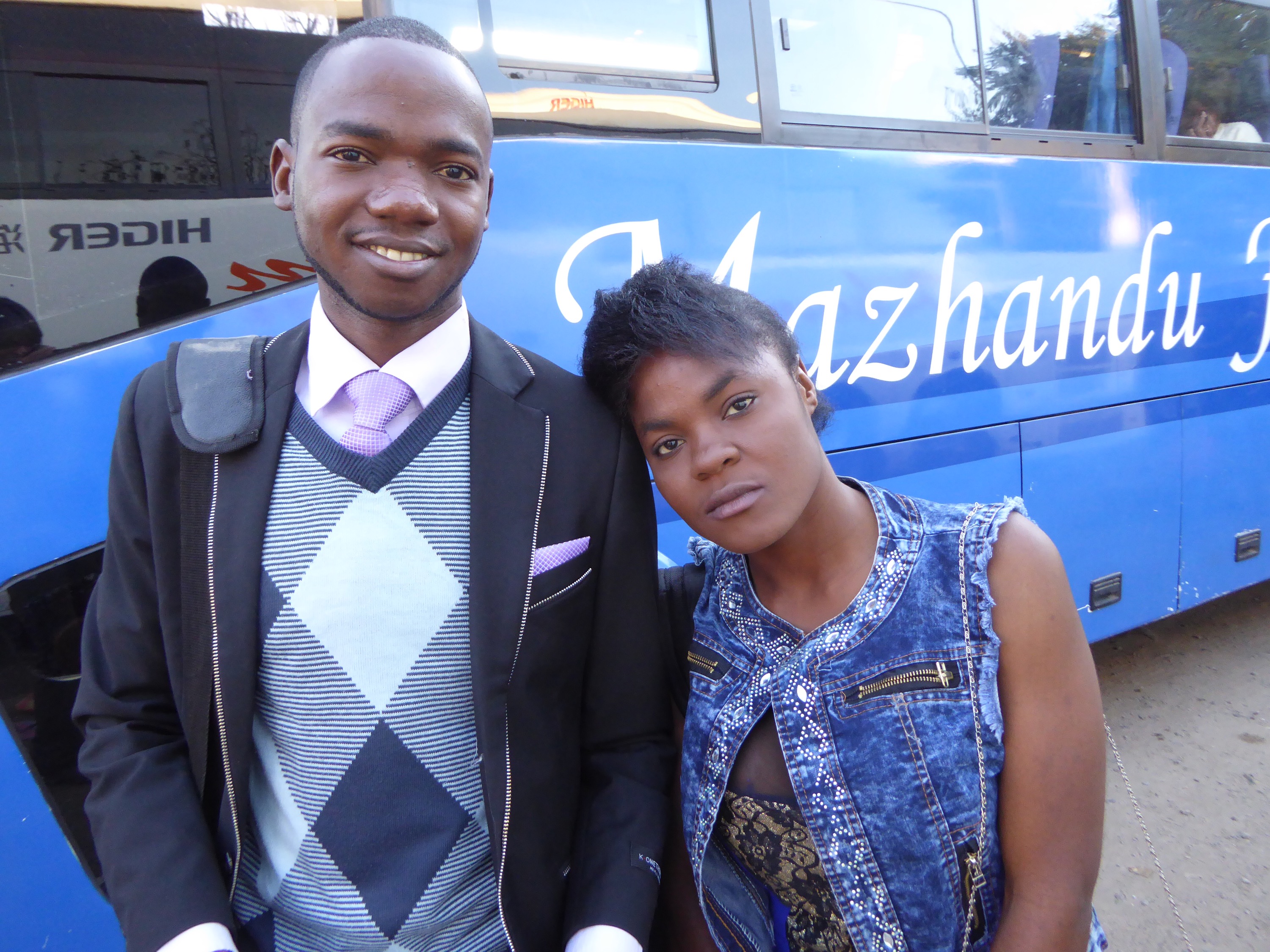